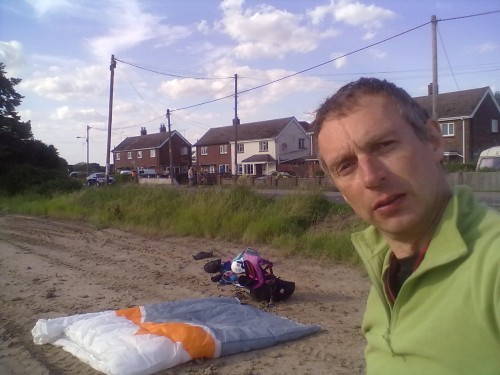 Richard Carter, flying an EN D Ozone MantraM3, has broken the British paragliding open distance record with a flight of 253km from Bradwell Edge in the Peak District.

The flight on 9 Aug 2011 exceeds John Silvester’s 194km flight across the length of Wales and brings the record back to Richard for the eighth time! Richard was a huge figure in British paragliding during the 90s and he continually pushed the record further and further until he retired from the sport in the early noughties.

Richard Carter’s story is a remarkable one. On 9 August 2011 he set a new UK open distance paragliding record for the 8th time. That in itself is an unparalleled achievement, but when you realise that he hardly picked up a glider between 1994 and 2009, you realise that this guy must be a bit special.

At 253km, Richard’s flight obliterates the previous record of 194km held by the legendary John Sylvester.

UK pilots who have only joined the sport in the last ten years have been amused, puzzled and amazed by this ‘new’ arrival on the hill, with his aging gear, who then calmly out-flies just about everyone! What many don’t realise they are in the presence of an ex-British Champion and team member, who was part of the team which won Silver at the St Andre World Championships in 1991 and Bronze at the Verbier Worlds two years later.

Richard Carter: we know who you are, but what have you been doing the last decade and a bit?

Racing motorbikes, climbing and working. I did go flying occasionally, but it certainly wasn’t a priority. From home I could see people flying the local sites, but I didn’t get the feeling I wanted to be with them.

How much flying have you done in recent years?

I started getting back into it in 2010 and have done a fair bit this year as well. I started going XC again, but frustratingly hadn’t done any really big flights. I work off-shore so I am certainly not a full time flyer.

What are you flying now?

Ozone Mantra M3, with my 18 year old Sky Systems harness. I fact, other than the wing, gloves and GPS, everything is what I used in 1994 when I set the record with 163 km. I am thinking of treating myself to a pod harness and maybe even a new wing though!

Have you been planning this for a while or was this an opportune moment?

I really wanted to do the ton this year and was keen to get out on the remaining good days of the season. August 9th was looking OK and I was really motivated. I had all my gear ready by lunchtime the previous day. The possibility of it being a record day was at the back of my mind.

What was the forecast like? Did it hold great promise?

It was forecast to be windy so it was important to get in the air early, before launch blew out.

It was howling early in the morning and I met Helen Gant at her house, planning to go to a site further north where the winds were lighter. We made a final weather check, including the local wind speed and decided our local Peak District sites were the better option after all. The predictions for thermal strength were good and importantly there was a good band of air moving across the country in the direction we wanted to fly. The forecast down wind was very promising with only a small chance of some over-development.

Where did you launch from and what time of day was it?

Bradwell Edge in the Peak District. I was in the air just after 10am.

I left with Helen who is great XC pilot, but we soon took slightly different routes, so I did just about the whole flight on my own. In some ways I find it easier on my own because you concentrate of decisions rather than taking account of what the gaggle is doing.

What was the flight like? Was it easy all the way or were there difficult bits? Any low saves?

It was tricky at first; the climbs were petering out at about 1,070m (3,500ft) above sea level and the ground in that area is 300m (1,000ft) asl. I eventually got to cloud base in my fifth climb but that was still only 1,250m (4,100ft) asl. On the positive side, with such a shallow convective layer the climbs were closely spaced. As you go further east the ground gets lower and base gets higher so it got easier and I never got below 520m (1,700ft) asl.

I found most of the climbs by gliding over likely ground sources and very few under clouds. The clouds were shallow and often were disintegrating by the time I got there.

I was conscious of the need to keep moving so pressed on when the climbs got weak. I probably only got to base about five times. This was very unlike my 47km record in 1989 when I basically went round in circles, getting blown by the wind and then landed after attempting the first proper glide. It is fair to say that paragliders have improved a fair bit since then!

I do sometimes get bored on long flights, if a lot of circling in weak lift is involved. This was great flight for me as the visibility was fabulous and I covered the ground reasonably quickly. I flew over lots of places I knew: boyhood haunts, old fishing spots, my sister’s house, places I’d lived and worked. I even had a good view of Stansted Airport, where I’d flown out of a few weeks earlier (in an aeroplane), off to Slovenia on a flying trip.

What about big street runs? Did you hit any long lines of convergence?

I wish! Considering the wind strength, I expected some streeting, but found none. I was able to cross wind frequently without encountering bad lines of sink.

Were there any airspace issues? Was the flight compromised or affected by airspace?

All of the big flights in the UK require dodging airspace or the sea. Flights from Bradwell in a SE direction bring two major airports and numerous small Air Traffic Zones into play. I was constantly planning ahead and making crosswind glides to get in good positions to avoid airspace. I was able to go well underneath East Midlands Control Area near Nottingham.

The day was getting weaker and about 20 or 30km from the coast I lost a climb. I thought about going back for it, but decided to go on glide. I didn’t get up again and landed at 5.15pm about 6km from the coast. I am delighted to have beaten 250km and the fact that I didn’t quite max-out leaves a bit of a carrot for the future!

Is 300km possible in your eyes? If so from where?

Yes, but airspace is a huge issue. From another of the Peak District sites, Lords Seat there is over 300km to the south coast, but as well as airspace, encroaching sea air could spoil it. Heading in the other direction from Eyam Edge there is a chance, but you would need SSW wind early in the flight and Southerly later on. From Clough Head in the Lake District there is a possibility but you would have to be east of Doncaster airspace and avoid the east coast. Nothing too easy really.

What are your future plans in flying?

I would like to some triangles and out and returns in the more mountainous regions of the UK such as the Lake District and Scotland. We need some of the light-wind, unstable days like we had this spring. The main thing is to enjoy my flying and not to worry about having to make the most of every opportunity. On the 253km day I was more than happy to take the gamble of leaving the hill early. It may not have worked and that is OK by me!

Cheers Richard. Thank you very much and massive congratulations on setting the record.

Did you fly that day in the UK? What kind of day did you have? leave your comments below.