Jerome Maupoint and OMG break out the hiking boots, cut their food and paragliding kit to a minimum and head for Aragon in Northern Spain to spend some time communing with the local raptors. First published in Cross Country magazine, 2004. 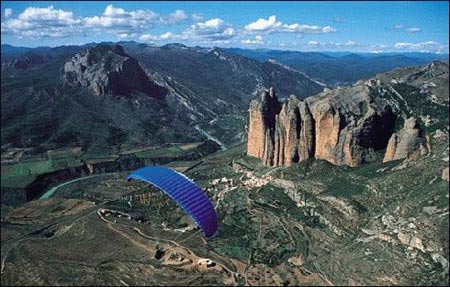 Wild country: paragliding in Aragon is measured in vultures, not kilometres. All photos: Jerome Maupoint

OCCUPYING the steepest part of the Central Pyrenees, Aragon is situated in Spain’s western province of Huesca and bordering the province of Navarra. The highlands of Aragon are part flatlands, part mountain and the terrain gradually winds down from rocky peaks to rolling hills. This is an extraordinary landscape peppered with sleepy villages such as our first stop, Loarre.

We approach the village through clouds of dust kicked up by a flock of sheep and make our way quietly past the sleeping sentinel of an ancient black dog dozing in the middle of the road. Nearby, old men lean on their canes and overhead the vultures circle under the noonday sun. High above, a 10th century monastery overlooks the sun baked Ayerbe plains dotted with groves of almond and olives, and all around there are castles and monasteries scattered amongst the rocky hills.

Omg and I are here together with just the lightest of equipment and a few well-worn maps to explore the area on foot and by bivouac flying. The terrain is stunning, and densely populated with birds of prey especially on the cliffs above the villages of Riglos and Salto de Roldan. Our programme for day one is to launch beside Loarre castle and treat ourselves to a bird’s eye view of the region’s monasteries while scouting out the most promising bivouac sites. 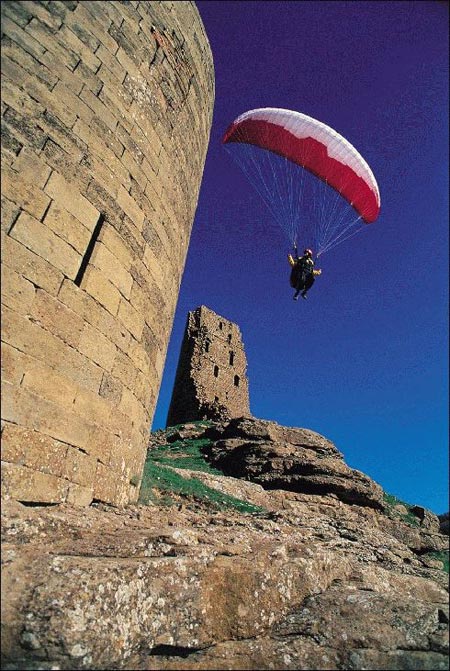 LOARRE TO RIGLOS
Caution is needed in this area since when the north wind streams down from the high mountain or the west wind streams in from the Atlantic, even the vultures hesitate to leave their nests. We have arrived during the month of March and we catch a spell of poor weather at the beginning of our trip. We suffer two days of rain and spend two nights in the Sant Engracia Inn, looking like sea captains constantly watching for a break in the weather.

Then on the third morning,10 am, we’re seated atop Loarre’s ramparts scrutinizing the plains below, the cloudbase is just above us and a huge fog band is spread over the Sierra.

The weather clears slightly and we take to the air at 11 am. Even though the terrain is releasing numerous little bubbles of lift, it looks as though our best bet is to venture out toward the edge of the plains, the way to Riglos, well-marked by large numbers of vultures.

At the Pena d’O Sol, we can see the elongated silhouettes of Mallos. A good thermal takes us past the monastery of Marcuelo and we advance cautiously, avoiding the temptation to explore deeper into the mountains where one mistake could easily result in a spell of challenging hiking. 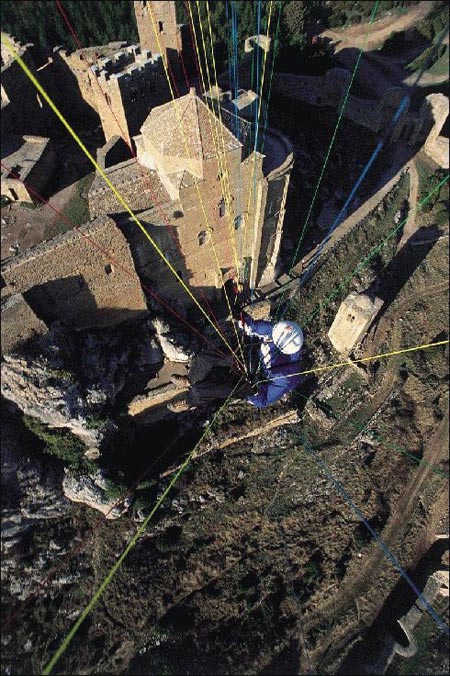 Leaving the shadow of the cumulus clouds, we marvel at the number of vultures, lammergeyers and similar birds. The huge rock face of Os Filsat, at the head of the Riglos valley, is a true haven for birds of prey. We’re tempted to fly toward them, but the towering walls of Pison and the slopes of Visera tempt us more. As we cruise along the cliffs we call to the many climbers clinging precariously to the rock walls as the raptors glide effortlessly by.

A few years ago it would have been tricky to land at the foot of these cliffs due to the many crosses: memorials to fallen climbers who pushed a little too far and dared too much. Omg approaches the cliffs to flirt with a roped party of climbers near a mountain hut. A few seconds later he lands at the foot of two well-known climbs: Moskitos and La Fiesta de Los Biceps. In this thermal oven, the approach is iffy and I allow the shape of the terrain to guide me rather than the strips of cloth tied to a juniper tree. Due to the tailwind the short landing area is quickly gobbled up and I end up in a bush, thankfully with no thorns.

That evening we hike up to the shelter of Santo Roman behind the summit of Mallos and have time to check out a take off area for the morning. We discover the area has been ravaged by a huge fire leaving the vegetation sparse enough to lay out our canopies.

IN FEATHERED COMPANY
In these parts, flights are not measured in kilometres flown, but rather in the number of vultures encountered. It’s no simple matter to share a thermal with a vulture since they don’t see things in quite the same way; a vulture is not there just to have fun. How often have you found yourself joining huge flocks of pilots all circling in a wide thermal, but been unable to exploit anything with a wing 11 metres in span? Birds of prey will pick up on any lift, no matter how weak, by sweeping a whole area and watching for what moves below on the ground. And their glide is unbeatable. Some of 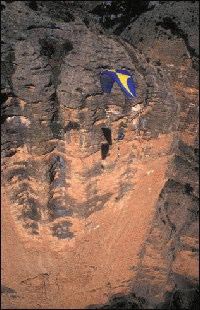 the birds we meet turn the wrong way, and the clumsiest ones barely skim our lines, stall beside us then flap their wings furiously.

The younger vultures, identified by their lighter coloured feathers, are more curious and daring, they come in very close, but the flutter of the cloth and the pilot swinging below bewilders them. During these moments when they dare to come in close, I try my best to stare them down whilst marvelling at their beauty.

FREE FLYER OR HERMIT
Sharing a welcome meal of a can of anchovy-stuffed olives over noodles before bedding down at Santo Roman, I’m anxious to rise early and explore the area before gliding along the slopes of Visera. We must time our flight well, since if we arrive at feeding time the entire colony will cause such a ruckus that we’d never be able to fly in their midst again.

At 9 am though, the hardest thing is to fly on an empty stomach. With barely enough water left between us for half a cup of coffee, the only solution is to land in Riglos, find the nearest caf} and ignore our feathered friends mocking us as they circle overhead.

The next take-off is only an hour and a half away by foot. If we do it right, we should be over San Miguel in time to catch the first thermals of the day.

To our great surprise, our improvised itinerary takes us on the high road thanks to blue thermals and a gentle south westerly wind. We land on a mountain top and then head for San Miguel where we set up a deluxe bivouac in the vaulted 12th century chapel. We could have left the Sierra Loarre behind but we choose instead to place bivouac experiences over mileage covered.

The next day is more stable, drastically reducing our flight possibilities, so we treat ourselves to lamb chops grilled in the main square of Ayerbe and pore over our maps, choosing our route onwards. With more stable weather forecast we decide to migrate toward Sabinanigo where the potential for hikes and flights will undoubtedly take us into even wilder parts, higher mountains and further adventures.

Location: Having crossed the French Spanish border via the Aspe Valley and Somport, take the N330 all the way to Jaca. Then follow the N240 towards Huesca. A smaller road leads to Riglos, then the village of Ayerge. Follow the road to Loarre and 4 km after that is the castle.

Maps: Pirineo Editions has a map and tourist booklet for “El Reino de los Mallos” which can be complemented with maps E8 and E15 (40,000:1) of the Aragone series edited by Prames.

Accommodation: Shops, accommodation and restaurants can be found in both Ayerbe and Loarre with camping available near Loarre Castle.