There’s a new breed of EN A paraglider, designed to take new pilots from school to base and beyond. We talked to Nova designer Philipp Medicus about designing an EN A+ glider.

We hope it is going to be a trend! Certainly, the width of the EN-A class allows us to design more than a typical school EN-A glider, which is in our case the Prion. There is under-used space in the EN-A category. Standard EN-A gliders target the schools. Which means training hill to first soaring flights. We sometimes even hear that schools don’t want too much performance! Performance in the EN-A class has never been a priority. But with EN A+, in our case the Aonic, we are aiming at qualified pilots. That’s the new thing.

Is it a niche that has not been fully explored?

Yes, exactly. And it comes because the schools in Germany have to teach on EN-A gliders, and this is also spreading to Austria and France. So this makes the niche bigger than it used to be. 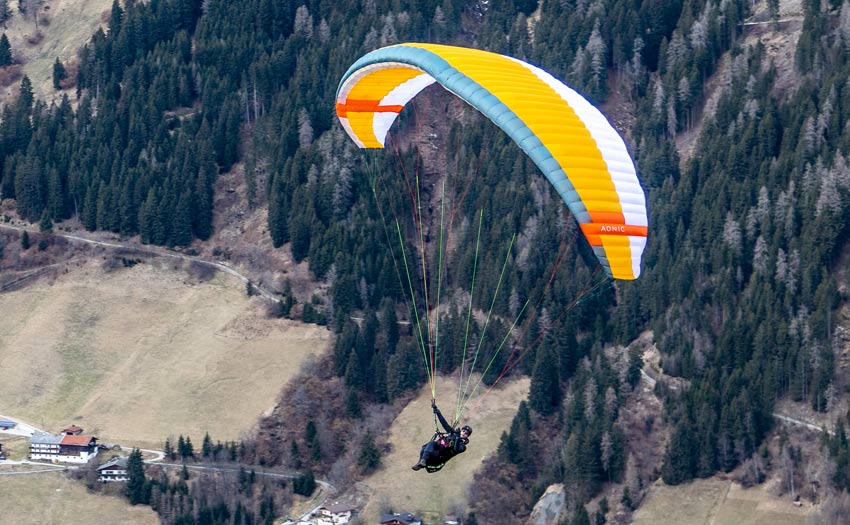 Are there particular challenges to design an EN A+, or is it easier because the space is there to be filled?

Actually, it is a bit like that. Low EN Bs are not that far away from EN A, so it is not that hard to make a low EN B an EN A. With us the Ion 6 (EN B) and Aonic (EN A) share a cell count and aspect ratio, but that is it. Everything else is different. The challenge is not to meet the EN A requirements, but we spend a lot of time on the handling. And that’s difficult actually, because what decides if someone likes the handling or not is the first impression.

And when we work many hours flying with the prototypes it’s very difficult to imagine that first impression. So we always ask other pilots to fly the glider, to try to gauge this first impression. This thing, the feeling a pilot gets, is more difficult to grasp. Certain handling characteristics might appear demanding to one pilot, and inspiring to another.

What differences will a pilot notice between an EN A+ and low EN B?

It’s the handling. In terms of safety they are very similar. But it is the handling. For example, the Aonic has higher brake pressure than the Ion 6. It’s not just about brake force, it’s about pressure. On launch you pull the brakes and immediately you know where your hands belong, and that is because the brake pressure increases over a small range. Somehow that is confidence inspiring for new pilots.

This interview was printed in issue 209 as part of a feature on EN A+ paragliders.