Timo Leonetti in Brazil in October 2020, when he was just 17. Photo: Eduardo Eisenlohr
Features

Timo Leonetti is one of the fastest-rising stars of cross country flying we’ve ever seen. Last year at just 17 he logged half a dozen 400k flights in Brazil. This year he’s been at it again already, logging two 400k flights and his first 500k with a 535km 10.5hr flight in northeast Brazil on 4 October 2021. This time last year he told Brazil’s Elisa Eisenlohr more about himself for Cross Country Magazine’s regular Naked Pilot column. First published in Cross Country 217 (Feb/Mar 2021).

I was born in Corsica, France. I’m 17 and I live there with my mum and dad. I learned Portuguese because I come to Brazil very often. I reckon I was only 18-months old the first time I came.

My dad has been flying in Quixadá for a long time. He has also worked as a tandem pilot in Canoa Quebrada. We come almost every year during the winter in Europe and stay up to four months here. My mum is also a pilot.

I learned to fly in Canoa Quebrada. It’s an easy place to learn with beach soaring flights and sand dunes, so at the age of seven I could already fly on my own using a small wing.

In Corsica flying conditions are stronger than Canoa Quebrada, so I began thermal flying later on at the age of eleven in a 16m2 wing. I flew a lot with my dad in Corsica and, after I learned thermalling, the flights just got longer and longer each time. My first cross country flight was 12km long. Very short, but I was 13 and very happy with it. 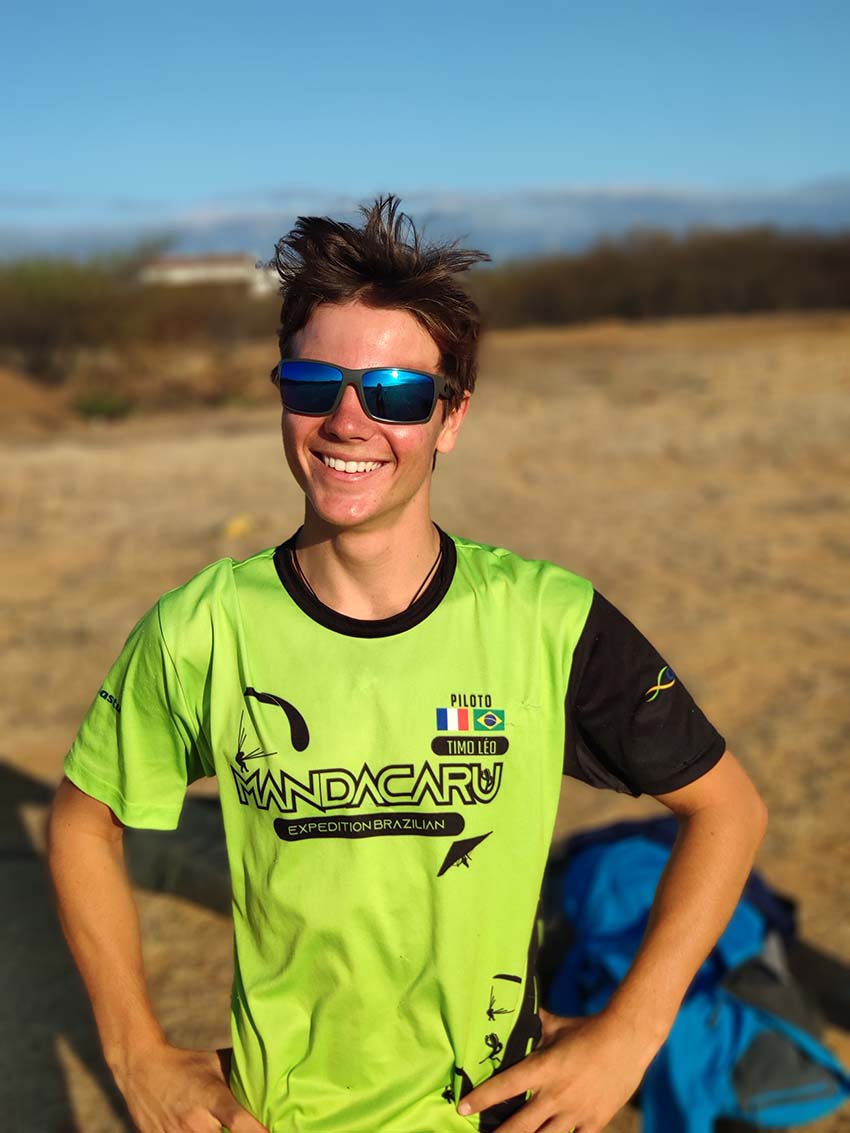 I always fly with my dad. Two years ago we went to Roldanillo in Colombia. I wanted to learn real cross country flying and my aim was to fly more than 100km. We ended up flying 160km together. It was incredible. Then in November 2019 we came to Assú here in Brazil and we flew 350km twice.

In the 2020 season in Brazil I flew more than 400km six times. My personal best was 460km taking off from Assú. We tow from a very large dry lake where there is a lot of space. The Mandacaru towing team (@mandacaru_fly) helps us with the logistics.

It was a bit hard to fly with my dad this time. I was mostly alone in the air. Our flying styles are different now. Different decisions… Sometimes I would take off earlier, sometimes later. Sometimes there were other people flying and I would prefer going with the gaggle instead of waiting for him. The second largest flight this year was 450km long and we started together and flew together until 270km, then we both got low. He ended up landing, but I did a low save and carried on. During another long flight, when I flew 430, he was also with me in the beginning, but landed on 300km. There was one flight where we were together from the beginning to the end. We were very close the whole time, thermalling together, gliding on the same lines. We flew 350km, not a great distance, but it was one of the best flights for me.

My next objective is 500km for sure. I want to come back to the Sertão with friends and my dad to reach the 500km mark. I was very close this year, but I am happy with what I achieved. The main purpose is to be happy with the flight. The most important thing is to get enough airtime. I always try to take off as early as possible and fly until the sunset. If I fly the whole day, the distance doesn’t matter.

I want to get my French tandem licence and also become a paragliding instructor. I want to get certified as a high mountain guide as well, because I do a lot of hiking, skiing, mountain climbing and I want to work with both paragliding and mountaineering in the future.

I’d like to work and follow the seasons. When the weather is warmer I can rock climb. When it’s cold, I can climb in the ice or snow. I am not sure about where I want to live. I just want to go wherever I like and stay for as long as it still pleases me, but I will always have my home in Corsica and in Brazil during the long distance flying season.

I am aware that my life path is very uncommon. I owe this to both my parents. I studied at home, with distance learning and this way of living made it possible for me to be close to nature and to the sports I like. Now, my dad, the guy who helped me develop my flying skills my whole life, is like a flying buddy to me. We fly at the same level. My parents, Alexandra and Stephane Leonetti, inspire me to always search for the joy of flying and life.

Find Timo’s latest flights, including his 535km, on XContest here