Sebastian looks back at the north face of the Matterhorn. Photo: Sebastian Brutscher
Features

Lightweight gear has opened up new adventures in the mountains and is once again attracting alpinists to the adventure of paragliding. Sebastian Brutscher took it to the extreme with a climb-and-fly of the north face of the Matterhorn. By Tarquin Cooper.

On 23 October 2021, German mountain guide Sebastian Brutscher stood on the summit of the Matterhorn (4,478m), cobra launched his wing and flew off one of the world’s most iconic summits. Sebastian isn’t the first to have flown from the Matterhorn (Red Bull X-Alps champion Chrigel Maurer and free-ride skier Sam Anthamatten also belong to that club), but he is the first to have done it after climbing the north face, one of the classic hard climbs of the Alps.

“The flight was really very impressive, a memory for life,” he says when we connect over video call. “I consider myself very lucky that everything went so well – the conditions on the wall and that a launch was possible despite the less than ideal wind direction.”

Sebastian, 33, began his ascent with fellow mountain guide Erdmann Käppeler, leaving the Hörnli hut on the mountain’s north-east ridge at 5am. But whereas most climbers follow this ridge to the top, Sebastian and Erdmann inched their way onto the north face and began climbing the steep and technical Schmid route (TD, V, 4+, M5). 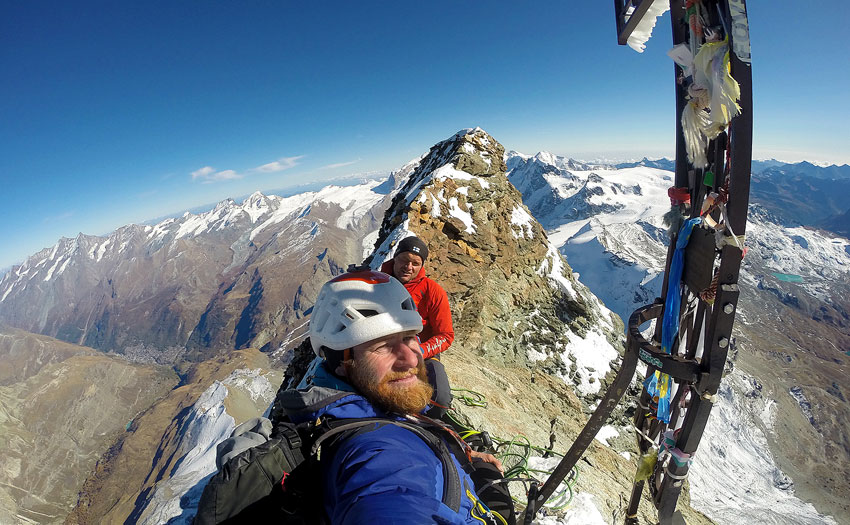 On the summit of the Matterhorn with climbing partner Erdmann Käppeler. Photo: Sebastian Brutscher

In 1931, this was the first of the six great Alpine north faces to be climbed, and to climbers, is as iconic as the north face of the Eiger (3,967m). It’s a 1,100m climb up loose and scrappy rock and thin ice. Although it’s not technically the most difficult or steepest, finding your way is not easy.

Protection is also limited and what gear you can place is of more psychological benefit than actual help, meaning climbers require a very strong head. The pair had just a 40m rope between them, and a handful of gear. Also packed in Sebastian’s rucksack was his Nova Bantam wing and Neo String harness, which together weighed just 2kg. After six hours’ climbing, they reached the summit.

Sebastian is an experienced alpinist who’s already climbed four of the six classic north faces (descending the usual way) but is a relative newcomer to paragliding. “I started flying in spring 2018,” he says. “At that time, my motivation was simply not to have to run downhill anymore! But I quickly found pleasure in XC flying, and I like to use the good flying days to make some distance.”

Although Sebastian’s climb-and-fly attracted interest, alpinists have been doing bold things with paragliders in the mountains for a long time.

“During the last few years they have been the key element in arousing excitement for the enchainment – linking – of more than one Alpine wall,” wrote John Bouchard in the American Alpine Journal. That was in 1988, in response to the activities of such pioneers as Eric Escoffier, Christophe Profit and Jean-Marc Boivin.

“Eric Escoffier flew from the Grandes Jorasses (4,208m) but their gliders were more like parachutes,” says Zeb Roche, a Chamonix mountain guide and paragliding instructor. “And Jean-Marc also used a helicopter so it’s a bit different.” One of only a handful of pilots to have flown from the summit of Everest (on 21 May 2001, aged 17, as a tandem passenger with his dad, Jean Noel Roche) Zeb agrees that today, armed with lightweight gear, alpinists can afford to pack a wing to keep their options open.

“Nowadays it’s so easy to put the glider in the rucksack. It opens a lot more options than in the past when we were just climbing easy routes with heavy backpacks. Now it’s an option even if you are not going to fly – you take a glider and if the situation is ok, you can launch.”

Paragliders for the approach

Zeb says the real opportunity with lightweight technology though is being able to use paragliders as a means of transport, getting you to the base of a climb, or even high on the mountain – then flying away safely afterwards.

Adventure pilots like Antoine Girard and Markus Anders are pioneers of this kind of para-alpinism in the Himalaya – Antoine among the big beasts of the Karakoram, Markus among 6,000m peaks in India’s Himachal Pradesh.

In the Alps, flying opens up previously unthinkable itineraries, says Zeb. “This summer I climbed Mont Blanc (4,807m) with a client and flew off in tandem. I finished early so I took another client in the afternoon and went to the top of the Aiguille du Midi (3,842m), flew to the Couvercle hut and next day climbed the Aiguille Verte (4,122m) and flew off that. When conditions are perfect it’s unbelievable what you can do.”

He adds that flying can be the safer option. “You avoid the danger of glaciers, falling in a crevasse, of seracs and avalanches – that’s quite a lot.”

Fred Souchon, another Mont Blanc pilot and alpinist, says the trend in para-alpinism is climbers taking to flying. “As a guide and rescuer with the PGHM I think there will be more and more people who go into alpinism with a wing due to weight decreases every year. But there is a limit.”

He says technically hard routes require too much gear for flying. On the other side he sees experienced alpinists getting into trouble because they don’t have the flying skills. “The 100% alpinist who just wants to go down on a lightweight wing – they don’t care about the wind and it’s these people who have accidents. You need to have a lot of practice to be safe.”

Erdmann Käppeler, Sebastian’s partner on the Matterhorn, found it too difficult to launch, having only been flying a year. After watching Sebastian take off he down-climbed to the Hörnli hut and launched from there.