Interview with a master: Rafael Saladini

This week the FAI (World Air Sports Federation) officially ratified the paragliding world record at an incredible 582km. Flown on 10 October 2019 in north east Brazil it is shared by three Brazilian pilots: Rafael Saladini, Marcel Prieto and Rafael de Moraes Barros. We covered the news of that flight when it happened here, and also featured it in depth in the magazine. Most recently, one of those three pilots, Rafa Saladini, set another world record: the distance-to-goal world record, 530km, also in northeast Brazil. This time he flew alone.

In the September issue of Cross Country magazine Matt Warren spoke to Rafael for his regular column, The Head Game. In it, Matt talks to pilots from around the world about the psychology of our sport: what’s going on inside our head when we fly? How can we make better decisions, all the time? How do we get to be a cool, calm, confident pilot? What does it take to be a world record setting pilot? “You don’t need to win all the time. You don’t have to put all you have at risk,” Rafael explained. Here’s more… 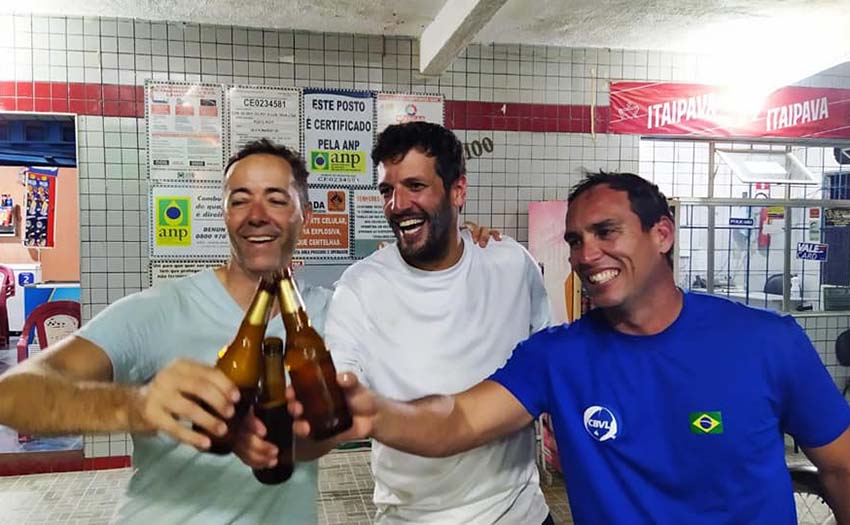 Rafa Saladini knows how to fly far – the 37-year-old has broken three straight-line distance world records. But he has also learned a lot about the head game and how to strike the right mental balance – often the hard way.

He grew up in Brazil surrounded by space, freedom, nature and privilege. But that came at a potentially dangerous psychological price. “I learned to drive motorcycles at nine, cars at 11,” says Rafa. “My parents were working so they weren’t really giving me limits and I had only older cousins and brothers pushing me to catch up. I was the ‘little brother’ completely out of control and overconfident about my motor skills.

“Confidence is really important, but overconfidence can be deadly. When I started to paraglide, I was arrogant and convinced that if something happened I would do some magical manoeuvre and save my ass.”

But when he had his first accident around 2000, aged 17, it didn’t work out that way. “I was six months into learning and was keen to follow a famous pilot – as I too often was. I launched after him, turned in the thermal and flew right back into take-off. I ended up in hospital with a broken pelvis, a broken foot, a broken arm – and a broken ego.

“It was a tragedy for me at that time, but now I can see that it taught me humility. Before, I was always trying to follow the big guys, but without the right experience. I had to learn that I couldn’t always do what they were doing.”

The accident was Rafa’s first lesson – but he was taught many others by his friends and family. “We all need positive influences in our life,” he says. “And my older cousin, Rodrigo, helped me to develop a better new attitude.

“After my accident, we went skiing, and I ignored his instructions in an area prone to avalanches. He told me that I could have killed us both and that if I didn’t change I was going to die. I argued with him at the time, and said he was wrong, but I came to see that he was right. That was another key lesson. I had to listen and to think about safety. I’ve never thanked him for that – so I think I’m going to do it tonight.”

Rafa returned to paragliding in 2003, but faced new psychological challenges. “I had now lost my self-esteem and started to make bad decisions again. I felt like the underdog, depressed, the opposite of what I had been before. But paragliding, slowly, helped me to overcome this feeling, as I started to conquer my dreams, my objectives. I was surrounded by the best people, like Rodrigo and Frank Brown, and they helped me develop.”

And he made rapid progress. In 2007, aged 24, he broke his first world record (461km) in Brazil. “But that made the whole situation dangerous again. I had four years’ of deep experience by then, but suddenly everyone was putting me at the same level as Frank Brown, who had more years of flying that I had years of life. There was no comparison. And that brought me deep anxiety.

“I suddenly started taking risks again. I even found myself asking why I was trying to kill myself while I was flying. I was the same person as before, but I now had a title and was being compared with my idols. It was too much pressure.”

“Thankfully, I have an Egyptian friend in Rio called Mahmud, and he is like a father to me. And he said something to me which is now my mantra: ‘Everything is too good. Don’t fuck up’.”

That simple piece of advice made Rafa realise that he could break records and chase goals, but that he shouldn’t step outside the line. Life is too good to lose. But he also understood that he had to get his mind straight. So he stopped flying again in 2008. “I had to rearrange myself and come back later,” he says.

“The break made me miss it,” he says. “It made me organise my emotions. It made me realise that paragliding is a hobby. That I can take it seriously, but that it should be fun. That break was really important for me and if I hadn’t taken it, I might now be dead because of my attitude.”

So do the old demons still haunt him? “The old, dangerous me is gone now,” he says. “But when the reckless thoughts do return, my wife, my family and Mahmud’s words come back into my head. You don’t need to win all the time. You don’t have to put all you have at risk. Just have fun – and then everything is going to be okay.”