How fast is it? How we test paraglider speeds

Measuring the performance characteristics of a paraglider, including paraglider speed, has always been notoriously difficult. But new tools are allowing pilots and manufacturers to do just that. Cross Country’s Hugh Miller reports on speed tests he’s been carrying out for the last year 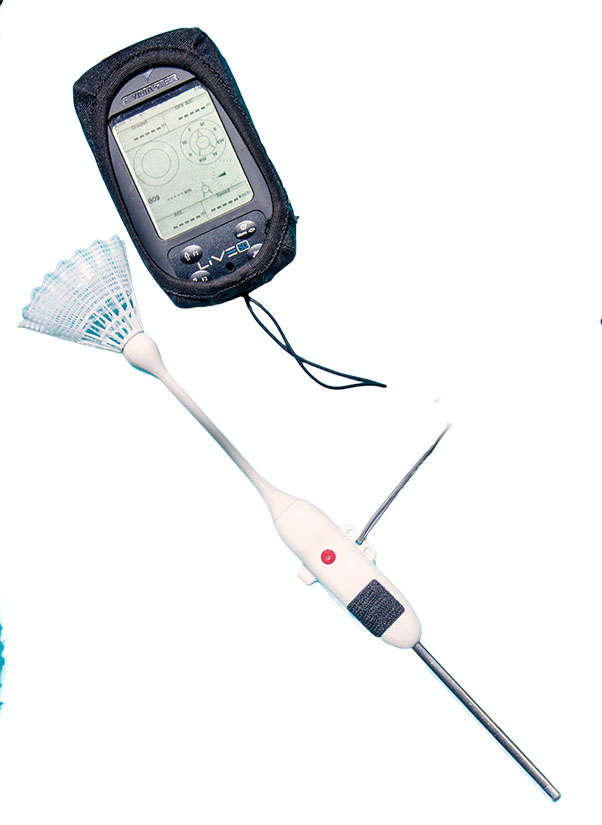 When Flymaster’s new True Air Speed (TAS) probe was released a couple of years ago we started to measure the trim and top speeds of the paragliders we review. However, we’ve been very surprised by the results. In short, paragliders really aren’t as fast as most pilots – and manufacturers – believe they are.

First, a bit of science. It’s obviously important for powered aircraft pilots to know their exact speed. However, despite any effects of wind, planes go faster at altitude than at sea level due to the lower air pressure – that’s why passenger jets cruise at such high altitudes.

Their instruments rely on pitot tubes to measure what’s known as their ‘Indicated Air Speed’ – which gives the same speed reading regardless of whether the plane is flying at sea level or 30,000ft. When a pitot tube freezes up, it can have disastrous consequences, as the pilots lose any indication of their stall speed. This is what is thought to have contributed to the Rio-to-Paris Air France flight 447 crash in 2012.

Explaining the instrument
In paragliding and hang gliding, we’ve long relied on propeller-based air speed indicators and GPS figures, to give us our speeds. But neither of these are accurate. In fact, the effects of altitude alone will mean that in still air, a paraglider flying at a top speed of 51km/h at just above sea level would be flying at 58km/h at 3,000m. You just go that much faster in thinner air and propeller-based air speed indicators don’t compensate for this.

Obviously you don’t want to be re-working out the stall speed of your Boeing 747 at different altitudes, hence the importance of indicated air speed, measured by pitot tubes. A GPS speed figure doesn’t make this compensation for differences in temperature, density and pressure – and of course doesn’t factor in wind speed and direction, either. GPS is great for accurate ground speed, but useless for air speed. 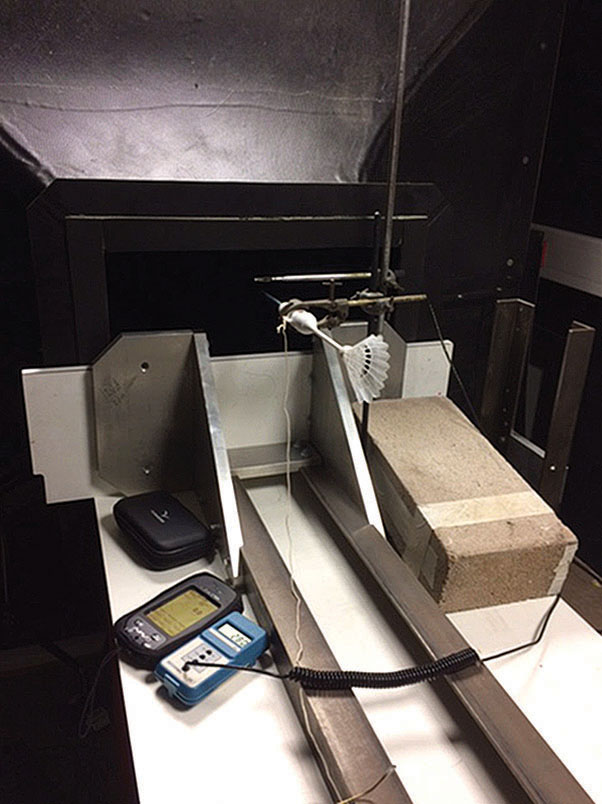 Anyhow, we were so surprised by the low readings our Flymaster TAS probe gave us that we sent it to Oxford University to be checked against their calibrated hot-wire anemometer. Hot-wire anemometers have been used for many years in the study of fluid dynamics. They are extremely sensitive and are almost universally employed for the detailed study of turbulent flows.

Adrian Thomas, a former British Paragliding Champion and regular contributor to Cross Country, ran the tests in Oxford University’s wind tunnel – where normally he tests the aerodynamics of small insects.

“The Flymaster TAS probe gives a nicely linear result”, he told us. “It slightly over reads – the real air speeds are consistently a fraction lower than the given figures across the 20-60 km/h range.”

“All pitot tubes need regular calibration, and it’s something sailplane pilots put a lot of effort into. NASA have also developed a calibration system between GPS figures and pitot tube figures, and it would be easy technology for instrument manufacturers to bring into paragliding”, he explained. Current methods used for aircraft pitot tube calibration include trailing cones, tower fly-bys, and pacer aeroplanes, which are all obviously time and cost intensive. The NASA method could actually be incorporated into paragliding instruments in the future.

Following the wind tunnel tests Adrian gave us a recalibration formula to calculate precise indicated air speeds which match GPS speeds at sea level. Going forwards, we will be using these results to inform our glider reviews, recalibrating our Flymaster TAS probes at six-monthly intervals.

To be absolutely sure that we can have faith in what our calibrated TAS probe tells us, I spent a day cycling up and down the seafront with the TAS probe and three GPSs. The TAS was wobbling a little on the shorter string dangling from my handlebar, but its reading was steadily consistent with the GPS ground speed.

It is worth noting that most manufacturers obviously don’t go through this whole rigmarole – they just compare their new prototype paragliders against their previous models, and measure what’s known as the ‘delta’ – the difference between trim speed and top speed. For CCC class, they report the speed system travel associated with that delta. So, for example, the Boomerang 10 has 15cm speed system travel, and a delta of 18km/h.

Does it matter?
Does top speed really matter? In competition, of course it does. Some test pilots claim the latest CCC wings are capable of 67km/h. In our view, this is an impossible Indicated Air Speed figure. We’ve tested the Ozone R11, widely regarded as the fastest paraglider ever made, and recorded a maximum of 65km/h. The R11 we tested featured standard risers, not extended risers which allow even further travel. CCC wings don’t feature trimmers like the R11 and have necessarily been restricted. 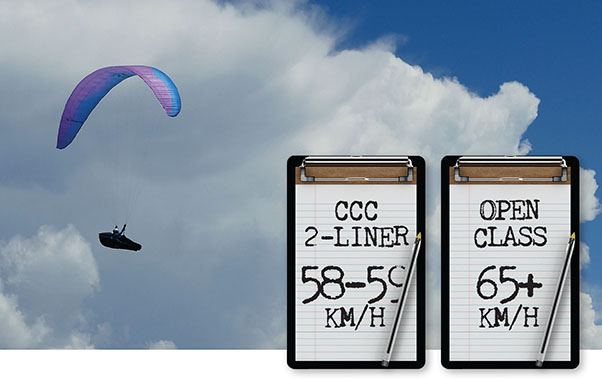 “I hardly ever see ground speeds consistently in the 60s, and I use full bar a lot”, said Adrian, who flies a Boomerang 10 and is also involved with glider development at GIN.

“On the other hand, I go as fast as anyone else so what does it matter?” he asks. “There is a little maturity appearing in the comp scene. Pilots have realised that trimming their wings fast means they lose out on climb and particularly on the gains you get going straight in lifty air at trim. At the most recent Superfinal, the wings that were checked were all within millimetres of manufacturers’ defined trim settings.”

Glider examples
We measured the top speed of some of the hottest three-liners: the UP Trango XC3, Ozone’s M6 and the GIN GTO2. Using the Flymaster TAS probe, we measured a top speed of 50-51km/h for all three wings, flown at 3kg below the top of the weight range. The new 777 King is a little quicker. This is indicated air speed, and should be the same at sea level as at cloudbase. 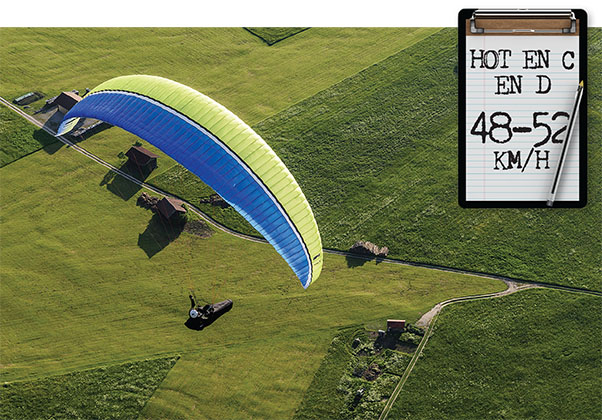 Try telling an EN-D pilot that though, and they’ll likely be a little shocked. They may also say they have recorded a GPS speed of 55-56 km/h when flying in the still evening air in the Alps. Both of us, however, are telling the same story.

Problems with measuring speed
However, obtaining accurate results using a TAS probe still isn’t easy. Thermik magazine editor Norbert Aprissnig told us: “We too have looked at providing accurate speed figures for our reviews but it has been a learning exercise in just how difficult it is to get accurate figures.”

He added: “Although modern TAS probes allow for automatic compensation for temperature and altitude, we still have to make sure the wings are in stable flight before taking measurements. Air movements cause fluctuations and we as test pilots end up filtering the data as best we can.”

Also worth noting is the instrument’s wind-speed indication. Most instrument systems, including XCSoar and the Oudie, provide information on wind direction and strength, but as you’ll know if you’ve ever used them much, the figures fluctuate enormously. You have to be flying consistent circles for the instrument to generate an approximate calculation. However, a pitot tube system like the Flymaster TAS is the only way to obtain accurate wind information as it will run a precise comparison between your aircraft speed with your GPS speed.

Finally, just to confuse things a little, Flymaster’s TAS probe stands for ‘True Air Speed’. From an aviation perspective, this is misleading, as ‘true air speed’ is different from the ‘indicated air speed’ that we’re interested in – the bald, pressure-based truth of an aircraft’s speed irrelevant of altitude.

What does it all mean?
Perhaps unsurprisingly the figures reveal that as a sport we have regularly over-estimated the speed of our wings. Just as one example, some pilots claim their paragliders have a trim speed of 40km/h. Meanwhile, Moyes states a trim speed of 35-37km/h for their Litespeed RX competition hang glider. Spot the difference. 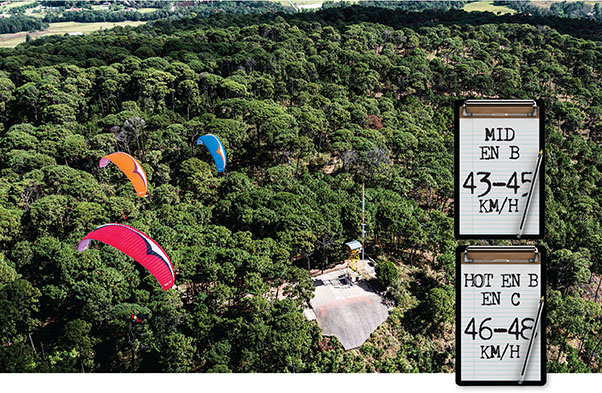 Let’s face it, pilots are loathe to be told their ‘60km/h’ wing only really hits 51km/h, and manufacturers understandably don’t want to publicise potentially slower figures. No one wants to be slower than the next pilot, or their manufacturing rival. But our testing has shown that most ‘mid-B’s can get to around 44-45km/h accelerated, while ‘hot’ EN-B wings and many C class wings have a top speed of 46-48km/h. Only EN-Ds and a handful of the very fastest C’s make it beyond 50km/h.

Of course, top speed in still air means nothing if the leading edge is too fragile for the speed to be usable in real life conditions. So let’s not get into a bidding war for the fastest wings on the block. In our reviews we will continue to focus on a wing’s usable speed range, accelerating through turbulent air to test its rigidity and cohesion, as this will always be a better indicator of a good, fast wing than any number.

This article was first published in Cross Country 172 (August 2016). Hugh Miller is a review pilot for Cross Country Magazine and UK XC League Champion 2016. If you enjoyed this sample article, perhaps you’d consider subscribing and supporting the world’s only international free flying magazine?