XC Tracer is the Marmite of flying instruments – you’ll either love it, or hate it. This is the latest miniaturised version, but it is as full-functioning as the XC Tracer II, so supercedes the slightly bigger model.

It’s an incredibly responsive vario, giving a virtually instant response to changes in climb rate. It’s the most responsive we have flown. Hence the love/hate element – most pilots are used to a bit of lag, and more damping, so the XC Tracer’s responsiveness can be utterly confusing. Dial into it, though, and mapping a climb becomes much more accurate.

What’s new on the outside?

The solar panels are new with an almost scratch-resistant surface. Otherwise, it’s very similar to the Tracer II. But much smaller: 44.5 x 44.5 x 16.5 mm, and weighing just 34 grams. So much harder to find on a hill, if you drop it. Yep, tested that one out.

And on the inside?

The XC Tracer II and XC Tracer Mini II GPS share an 18 state KF (Kalman Filter), a 15 state KF and a 4 state KF running in parallel. It took a very long time to develop and optimise this new code. The Mini II GPS uses signals from GPS, Galileo and Glonass with 1Hz so offers improved reception in tight valleys over the Tracer II. The accelerometer, gyroscope, and pressure sensor are all of the newest generation. Designer Koni Schafroth, whose day job is with the European Space Agency, says it took 20 months and more than 25 prototypes to perfect it.

You can completely customise the vario tone and functionality, including thermal sniffing (if you’re into that kind of thing). Lots of pilots have already set up XC Tracer profiles and they’re readily downloadable. The tone on the Mini II GPS is a little crisper than the Tracer II.

You should definitely connect it to XCSoar, FlySkyHy or another phone or tablet-run app to take advantage of the Mini II’s accuracy. Data is transmitted over BLE or UART. The wind drift information is particularly accurate, according to designer Koni.

One of the stand-out winning features is the fact you don’t have to charge it! Without sunshine the vario runs for at least 20h on a single battery charge, so you don’t have to worry about gliding under monster streets.

A pocket rocket of an instrument that takes some getting used to. It sounds and reacts totally differently depending on the personal settings, so fly a friend’s you think has a similar taste in varios to you first, pinch their profile, and then adjust carefully from there! Once it’s set up, you can just leave it on your flight deck and know it’ll work everytime – no charging needed. 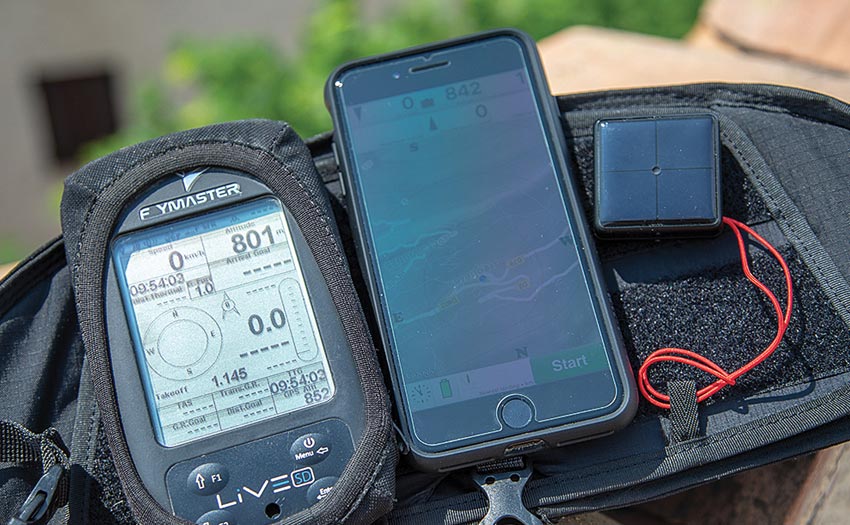 Luke Nicol took it for a flight or two afterwards. He writes about his experiences here:

My first flight with the XC Tracer II was bad, I hated it! It felt totally alien, I gave it another flight and then sent it back and told the dealer it wasn’t for me. Too much info and the timing felt off. Then I borrowed Theo Warden’s in Colombia, landed early, and hated it some more.

After chatting to lots of people most said they had to give the XC Tracer a few weeks to retrain themselves, but after they got used to the immediate response and sensitivity they felt they were thermalling much better and they couldn’t go back to a normal vario.

My transition was a few hours of poor thermalling whilst I got used to it but now I think I’m thermalling better than ever and love it. I still go back to my old ones on tandem flights as they stay in my other kit – and the delay seems terrible.

I think the advantages are that in really weak stuff the XC Tracer makes it much easier to work it. Also, the zero delay means I core a thermal almost in the first turn instead of taking a few goes to find the centre.

I use an Android phone running XCTrack and the XC Tracer wirelessly links to that. It’s the best setup I’ve had and I actually don’t use any other instrument as a backup. It has the perfect huge screen, massive battery, all the info for comps and two back-up tracklogs – one through the phone GPS and one through the XC Tracer unit.

My advice for anyone trying it: just put up with it for a few flights, you will adapt. I did turn off all the thermal finder functions and also the sink tone. So I just have it making a noise when I’m in more than +0.10m/s, which is perfect for me.

Ideally the instrument could be a bit louder. Especially on a hang glider, 10-20% more would be perfect.