The Knight 2 features a B/C steering system, has 54 cells and an aspect ratio of 5.2. Photo: Charlie King
EN-B, Reviews

This low-EN B glider has performance characteristics that give it attitude and spark, says Marcus King.

The Knight 2 is the second incarnation of Slovenian manufacturer Triple Seven’s low-B wing. It sits between their entry-level Pawn (EN A) and high-B Rook 3, which was updated last year. The new Knight is “designed to inspire confidence” in pilots stepping up from their first wing and starting to fly XC. It has already been joined by the K-Light 2, which shares the same basic design but is made from lightweight materials. We tested the full-fat version.

Opening the wing for the first time it is obvious that the Knight 2 is related to the Rook 3. It has similar construction, with the same small cell openings and optimised lines.

It also now sports the standard Triple Seven colour scheme of a single colour over the whole wing, apart from a couple of contrasting stripes on the tips. The coloured cloth is also used on the under-surface; the K-Light 2 is easily spotted with its white under-surface.

Triple Seven say the simplified colour scheme means there are no unnecessary seams apart from those needed to shape the sail, which helps performance. Indeed, looking at the wing it is obvious that designers at Triple 7 have had performance firmly in mind when making design decisions.

For example, there is quite a pronounced sharknose, supported with two reasonably short rods. There are also a higher number of cells than you usually see in wings of this class: 54 compared with 48 for the Ozone Buzz Z6, 47 for the Gin Atlas 2 and 51 for the Nova Ion 6, for example.

Aspect ratio is about the same as the others at 5.2, which is slightly reduced from the original Knight. At the back are the now ubiquitous mini-ribs. It all adds up to a very smooth looking wing. 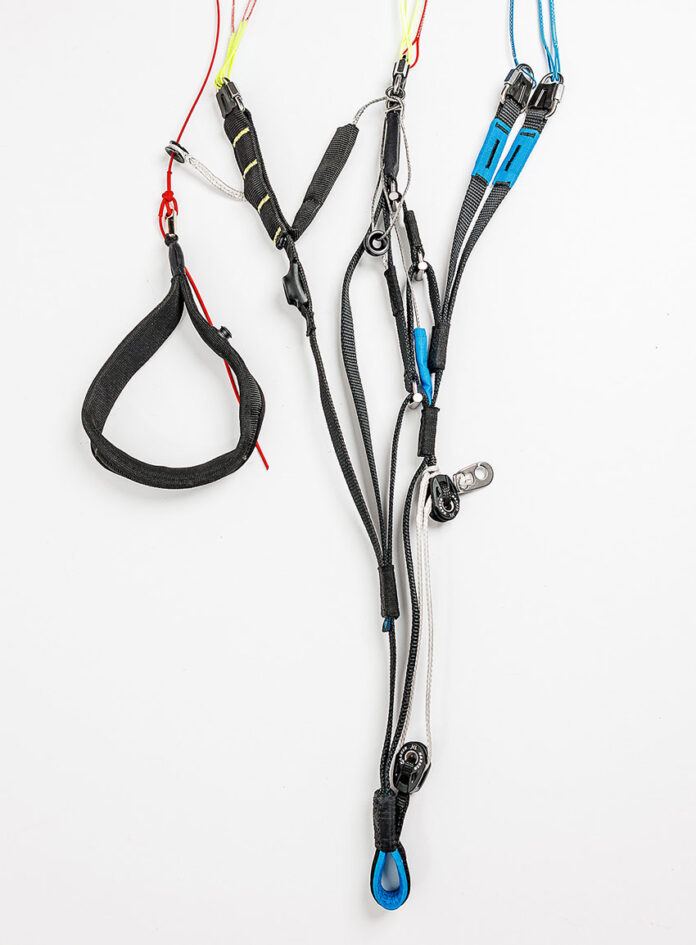 Nicely finished webbing risers that, unusually for a wing in this class, have a full B/C control system using ceramic and metal rings

Triple Seven have switched from using Dominico D30 to Porcher Skytex 38 for the new Knight 2. The extra cells and other changes have meant a small increase in weight from 5.2kg to 5.3kg for the ML size I was flying. This makes it heavier than the Buzz and Ion and close to the Atlas 2. The wing feels durable and if weight is an issue moving to the K-Light 2 will save 1.2kg.

Opening out the wing you can see that Triple Seven have optimised their lines in their search for performance. I’d question that decision for a low-B, as unsheathed lines can be tricky to manage. However, it was good to see they had kept sheathed main lines on the A’s and B’s, which make handling easier and allow colour coding.

The stabilo is also easy to find, being bright red where the others B’s are yellow. The rear main lines meanwhile are unsheathed, and as you travel up to where the line splits they become a very fine diameter. I found these caught more easily than some, but there was no problem with tangling. 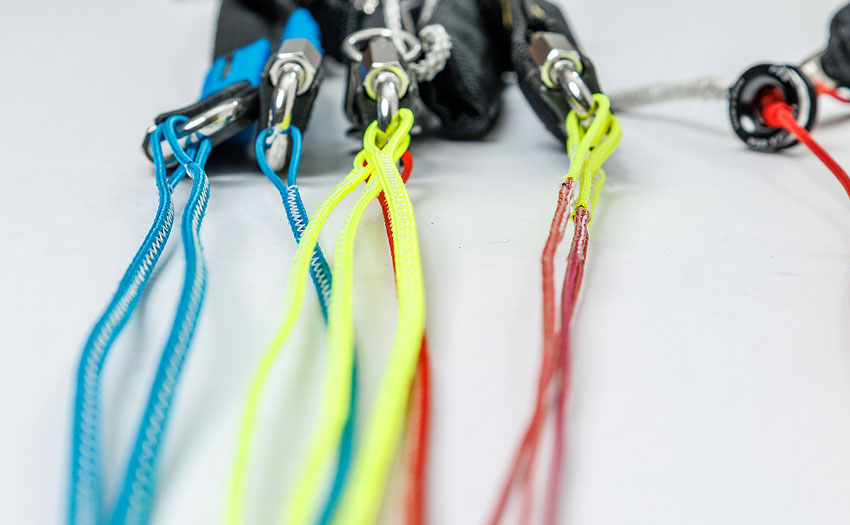 The risers are slick-looking and made of webbing. In possibly a first for a wing of this class there is a proper B/C-riser control system, with a padded area on the rear riser to pull. Rather than a fully floating B-riser, Triple Seven have opted for a standard riser setup but with the addition of a Dyneema line that runs through metal rings and a ceramic ring. When you pull down the C-riser the B is also affected. (See Rear-riser control for EN Bs on p32 for more on this).

Although it looks complicated the system has the advantage that any stretch in the Dyneema won’t affect the trim of the glider when unaccelerated. Triple Seven also say their system stops twisting of the riser, which can cause extra friction leading to wear. The cord is replaceable and a spare is supplied with the wing. If you wanted to declutter the risers you could remove most of the system – you would be left with the padded section of the rear riser and the ceramic ring.

The risers use good quality Harken pulleys in the speed system. The brake handles attach using a directional magnetic keeper. The handles themselves are well padded with space to get your hand in and out. Everything on the wing is finished to a high level. 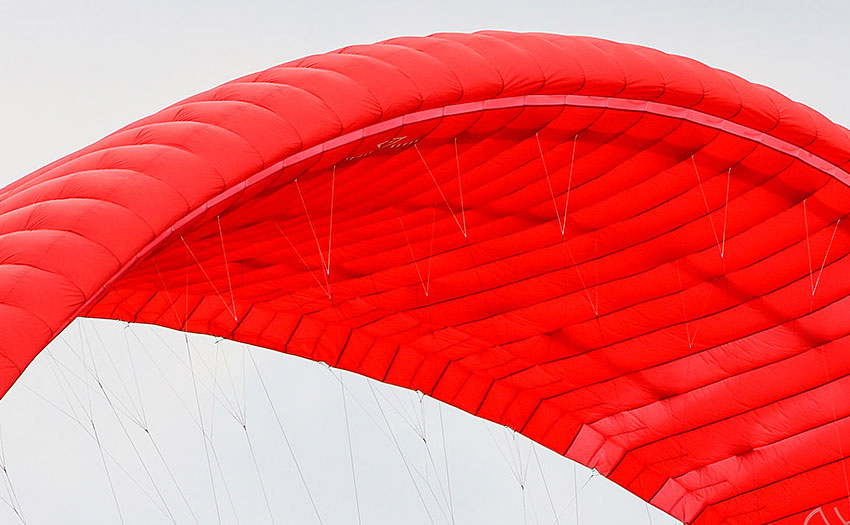 The sharknose, and small cell openings for a low B

It takes a bit of time for the wing to fill with air when building a wall, probably thanks to the small cell openings. It then requires a consistent pull to bring it overhead. If you ease off too early I found it better to reset and pull up again.

It’s not a wing that will race overhead catching you unawares, it rises steadily. On a day when the wind was very gusty I found this a real boon with the wing coming up in a very relaxed way. Once overhead there is no tendency for the wing to overshoot and it is easy to control above your head.

The first thing I noticed in the air was the directness of the brakes. The wing reacts almost immediately to input, which is impressive for this level of wing. The original Knight had quite a bit of roll, and this seems a little more controlled in the Knight 2, but it keeps the quick reaction to brake input.

Beyond the first 15cm brake pressure gets reasonably high so you won’t overdo things, and you will only need that first 15cm to get the wing turning in a thermal, unless it is a tight core. The heavier brake pressure will be reassuring for newer pilots – a clear signal to take care.

On entering thermals the wing has no tendency to sit back, instead it pushes into the lift nicely, without the acceleration that some higher-level wings now have that low air-timers can find disconcerting. Pitch is well controlled. Once in and turning the wing needs very little management, even in strong climbs.

On my first flight I was taking photos, brakes in one hand, and it was relatively easy to keep the wing thermalling well like this. Of course, I don’t recommend this and being active on the outside brake will keep the wing better pressurised. My point is it’s all very relaxing as you climb. It works well whether the lift is weak or strong and I found it easy to climb-out on our local mountain, even on days when it was stable low down. 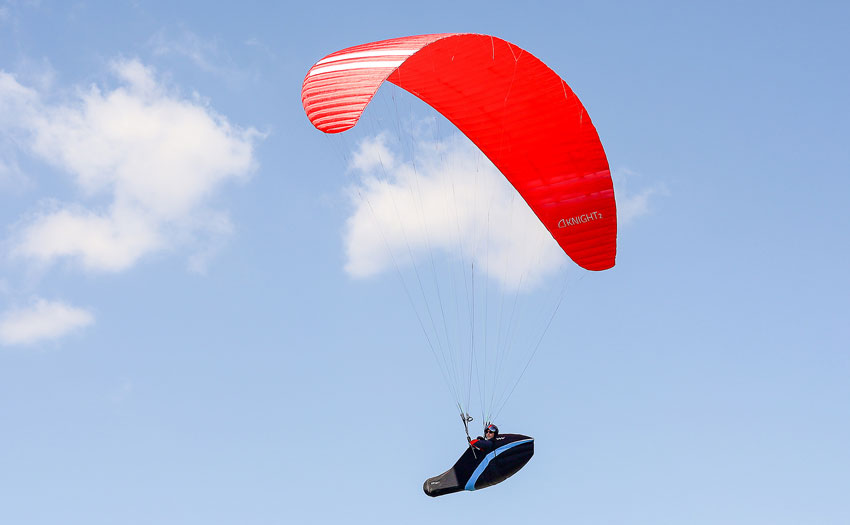 The wing feels nice and solid in the air. It’s a great wing for pilots looking to build their skills.

On transitions it is noticeable that the wing doesn’t get knocked back by turbulence, but pushes through very nicely for this class of wing. The bar is easy to use and the glide only really deteriorates when going pulley-to-pulley.

On our local ridge-run I was happy flying along at half-bar which gave me a good balance of speed and performance. The rear-riser controls are effective but a bit harder than some of those on the higher-class and hybrid two/three-line wings I have been flying recently. To be fair you don’t really need it to control pitch. Rather, it is more for steering on bar and slowing up in the lift without coming off the bar, for which it is effective. It lacked some of the feel you get on the higher-class wings, but it is still useful for honing these skills on this class of wing before moving up.

Pushing into-wind along the ridge I was impressed with the real-world performance, which allowed me to push on through sinky areas despite somewhat bouncy conditions. On a separate flight a few days later there were multiple inversions which made transitions a bit bumpy. A pilot on an EN-C told me he never got the chance to relax. On the Knight 2 it was a different story: it absorbs the turbulence well, and the movements are just that bit slower so you don’t have the feeling it is going to get away from you and you have time to react.

Thermals were strong and sink was equally pronounced, but the wing had a solid, dependable feel and always stayed above my head with no pitching movements.

The bar is fully usable across its whole range with higher pressure near the end of travel and gives around 11km/h over trim speed at its full extent. As mentioned above you do feel the glide drop off in the final few centimetres, so I tended to use it between half and three-quarters bar.

The wing feels nice and solid in the air. However, on a particularly rowdy day when I was still dialling into the wing I did get a couple of small wingtip collapses. The glider was very well behaved with no big direction change or dive. I found the same when inducing bigger collapses; they all came out smoothly without fuss.

There are three main lines on each side with the outer-A on a split riser to make Big Ears easy. I had to use them in anger while getting down to land as the wind picked up when flying in a convergence zone.

They are naturally not as big as on wings with two main lines, but I found them more stable than some. Only when I induced some oscillation by weightshifting hard did they flap, but they soon settled down if I stopped the inputs. Adding bar keeps the speed up so you can escape the area of lift you are in. Once released, I found them quite slow to roll out – a pump speeds up the recovery.

In spirals it was easy to control the rate of turn and descent with the brakes and easing out bleeds off the energy well, so you don’t get any nasty surprises on exit. It’s easy to get wingovers nice and high but this is a wing honed for cross-country performance rather than freestyle.

This is a great wing for pilots looking to build their skills. With this wing you will be able to learn all the techniques you will need as you progress in the sport, knowing that it will look after you.

With its designers’ obvious attention to performance, it’s a wing that won’t hold you back as you learn. Your progression will be rewarded by longer cross-country flights as the wing has top-level performance for its class, especially when on glide in moving air and climbing in weaker thermals.

As well as newer pilots, if you are a pilot that gets fewer hours than you used to but still fly XC and want low-EN-B safety, then those same traits mean the Knight 2 might suit you too.

Triple Seven say: “Improved skills only happen when you have complete confidence in your wing. We built the new Knight 2 around this simple premise”