As I stepped up to my knees in the spring snow I questioned the wisdom of a hike-and-fly so early in the season; but hey, the sky was blue, my bag was light and the signs were that there was a gentle breeze from the right direction.

We had left our sleepy village and headed up the mountain to meet the sun. The southern slopes were clear of snow, and with only a few kilos on my back the walk was the perfect start to the day.

On reaching the col we moved onto the shaded tree-covered northwesterly slopes, where the snow still lay deep. The normally easy to follow path had disappeared, and all we had to follow were our noses and the footprints of another hiker, who had sensibly used snowshoes. So we found ourselves floundering in the snow up to our knees.

Abandoning the normal route we moved out of the trees on to sunnier slopes, where the snow cover was thinner, and we were able to pick up the pace.

The pack on my back only weighed around four kilos despite it both being a harness and containing a tandem. My wife Charlie was carrying an even lighter pack, with just her hike-and–fly harness and a few snacks. Welcome to the wonderful world of single-skin tandems. 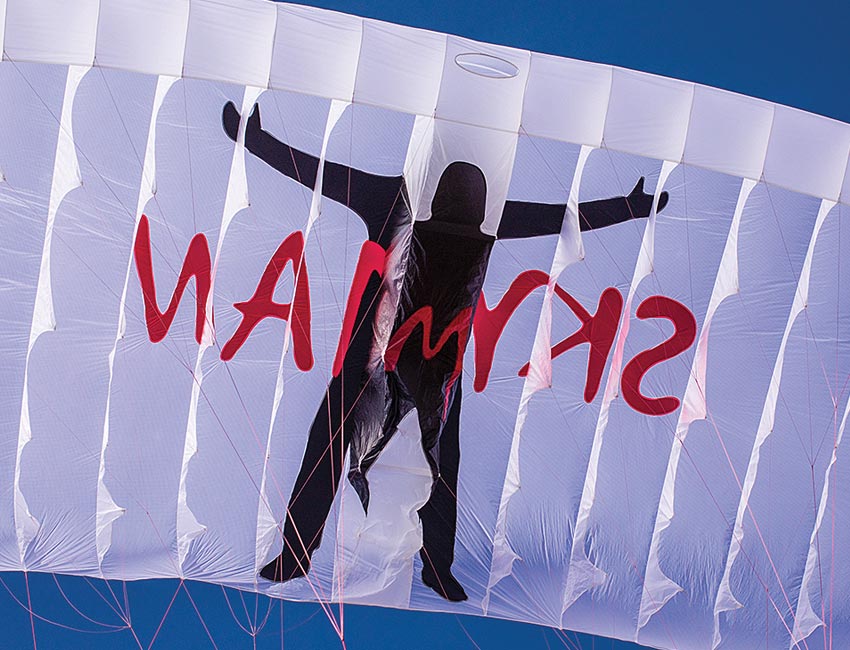 Single-skin, just the middle cell is a complete cell

We were testing the Sir Edmund single skin from Skyman. Skyman and sister company Independence have introduced a range of single-skin wings with Skyman’s offerings made from lightweight material for minimum weight and packing size.

The wings differ slightly in design from some other single-skin offerings in that they have only one ‘cell’ in the centre of the wing, although there is also a mini-cell in each wingtip.

The wing we tried was the light version, which weighs just 2.61kg for a 31m2 wing. It has unsheathed lines, and there are quite a few near the wing, but as these mainly sit on the glider before launch they aren’t a problem.

Being a full-on mountain wing it has Dyneema bootlace-style risers that may worry your passengers. They are easy enough to handle though, and the brake handles are fat enough to be comfortable in flight.

On launch, once we had cleared a few of the clingy plants, the wing rose steadily. Like most other single-skinners it was easy to pull overhead, even in the light breeze. If it goes to one side a bit of pressure on one riser quickly brings it back.

With a quick run we were soon in the air. 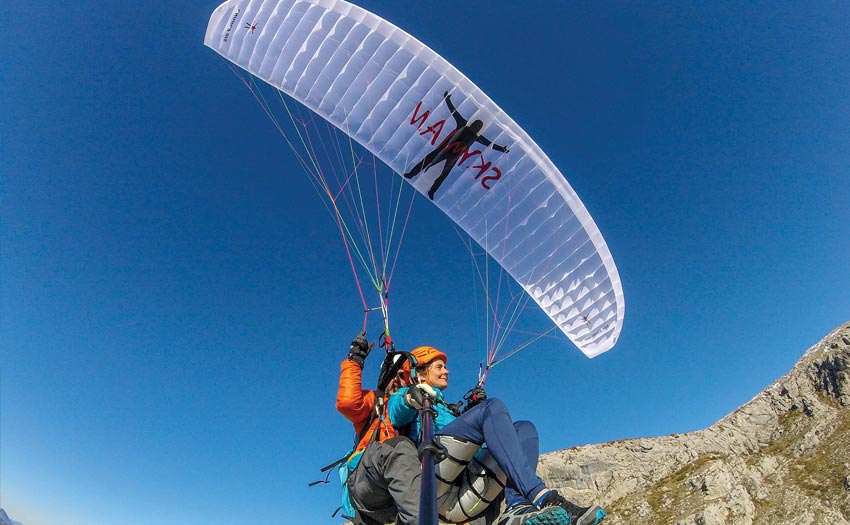 Flying along the cliffs with the morning lift starting to work the wing felt nicely solid. It does give little pitching movements, but as with some of the solo single-skin wings I have flown, it feels like it is going to pitch more than it actually does. Once I dialled into it a bit I realised I could let the initial pitch happen and then the brakes would catch it without much movement at all.

In this respect it felt a bit more like the Ozone XXLight than the Niviuk Bi Skin 2 P. The Niviuk glider feels a bit more “normal”, but that has six closed cells spread across the span and weighs over half a kilo more – in the world of mountaineering half a kilo is massive.

As we reached the part of the cliffs that face more east we found one of the first thermals of the day. The wing didn’t obviously sit back as we pushed into it. Pulling the brake I found it easy to keep the wing in the lift without it banking over too much, as some mini-wings do.

We were climbing and the cliff was dropping away from us. Brake pressure was reasonably high: a bit harder than my normal tandem but this helps the wing feel secure. There was enough information to help me feel what the air was doing without it being noisy. My passenger shaking with cold though was enough to persuade me to head down, so we flew out into the valley. 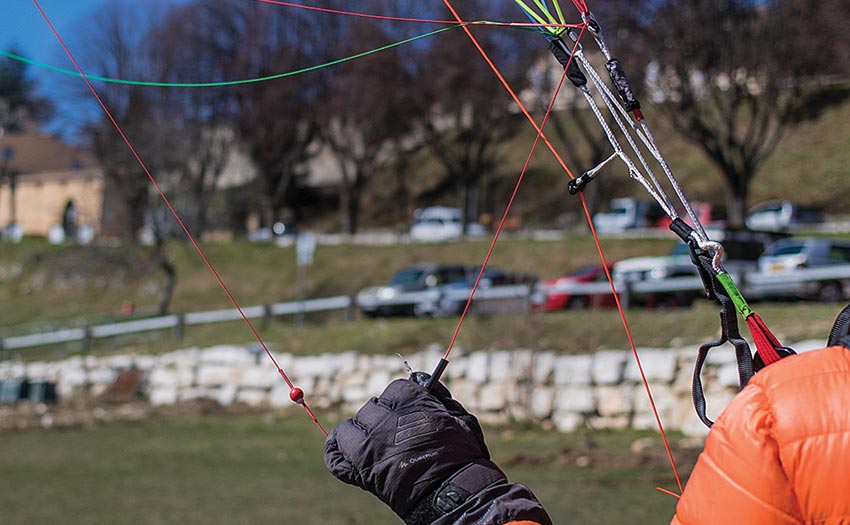 Big-ears handles make pulling them easy, but we were suprised to find the wing turned in the opposite direction when only one was applied

Pulling a big-ear on one side I was surprised to find the wing turned away from that side. With both ears in, the wing was nicely stable and we had a good descent rate. Playing with wingovers and a quick spiral I found the wing behaved like other single-skin wings I have flown, in that as soon as you stop the commands it goes back to straight flight with no pitching.

The glider is equipped with trimmers, although their travel is quite short. I found they only gave around 6km/h extra speed. I found them a little tricky to use at first but once you are used to the mechanism they are fine.

As we approached the landing the light wind was switching around as a thermal broke off. Giving the wing plenty of speed we were able to make an easy stand-up landing. It has perhaps slightly less resource than the heavier Niviuk, but it coped well with the fickle conditions and, given enough speed, will make a nicely controlled flare. 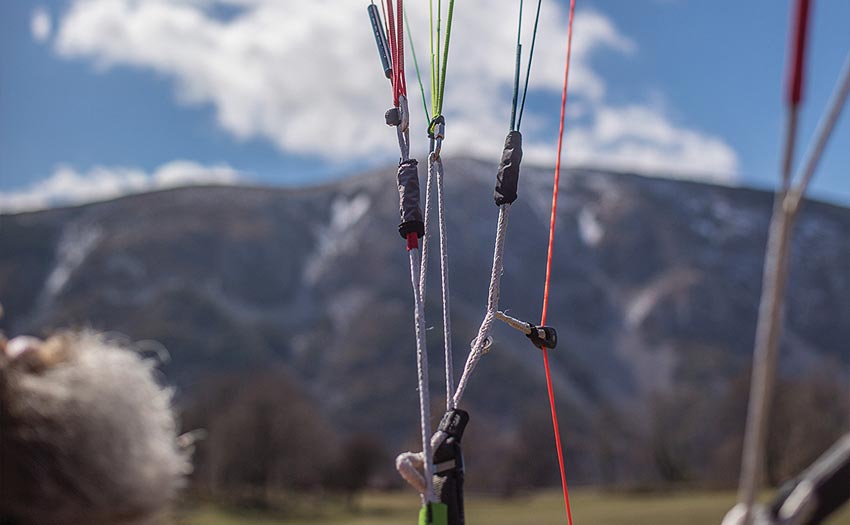 A few days later I headed up to try the wing in proper thermals using my full tandem harness and reserve. In strong air the wing felt like it needed a bit more handling.

In common with other single-skin wings I have flown it felt like it was going to make big pitch movements when in stronger air, so it feels busy. However, the actual movements aren’t as big as you would expect and the wing proved to be very stable and coped with the conditions well. It just feels like it would be tiring to fly for long periods in these conditions, but then that’s not really what this wing is about.

Rather, this is a specialist piece of kit, shaving all the excess weight off for when it is important. It would be perfect for sharing mountain adventures with non-flyers, or just enjoying hike-and-fly-trips together.

It is currently the lightest certified tandem on the market. But don’t mistake this optimisation for being extreme: in the air it is nicely stable and easy to control; it just maybe lacks some of the finesse of heavier wings.

At the end of the day though, this is a tandem that weighs less than 3kg and can carry 190kg – and that is pretty remarkable.