The sixth incarnation of the Rush, Ozone’s high end EN-B wing, was in hot demand. So I only had a short time to get to know it. Luckily that included a six-hour flight through the southern Alps using it for what it was designed for – a 100km out-and-return cross-country flight; a flight that gave me a good feel for the wing and what it is capable of. 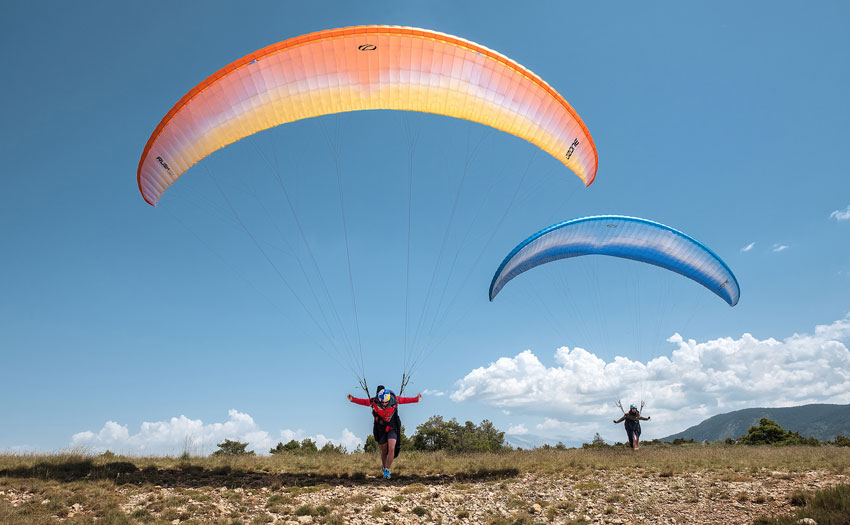 The wing comes up smoothly and calmly on launch.

The Rush 6 is billed as the baby Delta. It uses the same hybrid two/three-line layout – a first in the B category – with a two-line configuration on the tips and three in the centre of the wing where more support is needed. The new line configuration obviously reduces the total line consumption, but it brings other benefits too.

Designer Luc Armant says it allows them to balance the spanwise lift more easily in accelerated flight. It also allows better control of the trim of the tip. “At the tips, with three-line layouts there is very little space between the tabs; by moving to a two-line layout it makes it easier to trim this area and the lift distribution can be better controlled,” he explained.

Opening the wing for the first time it looks very much like a Delta. The aspect ratio has been reduced from 6.05 of the Delta to 5.7 and it has four fewer cells at 62. It’s still an increase in aspect ratio over the previous model, which was 5.55. In comparison, the new Explorer 2 from Gin has an aspect ratio of over 6.

Like the Rush 5, the new model has triple transverse 3D shaping seams on the leading edge; the Delta has just two. This helps with smoothing and accurately shaping this important part of the profile. Ozone say they have also made changes to the construction of the mini-ribs at the rear which further reduce parasitic drag.

The leading edge of course has a sharknose design. You will also find the mid-cell tapes – ‘G-strings’ – which hold the cell opening shape during accelerated flight and stop vibration. These were first seen on the previous model of the Rush and have been used on all the subsequent gliders including the Delta 4. 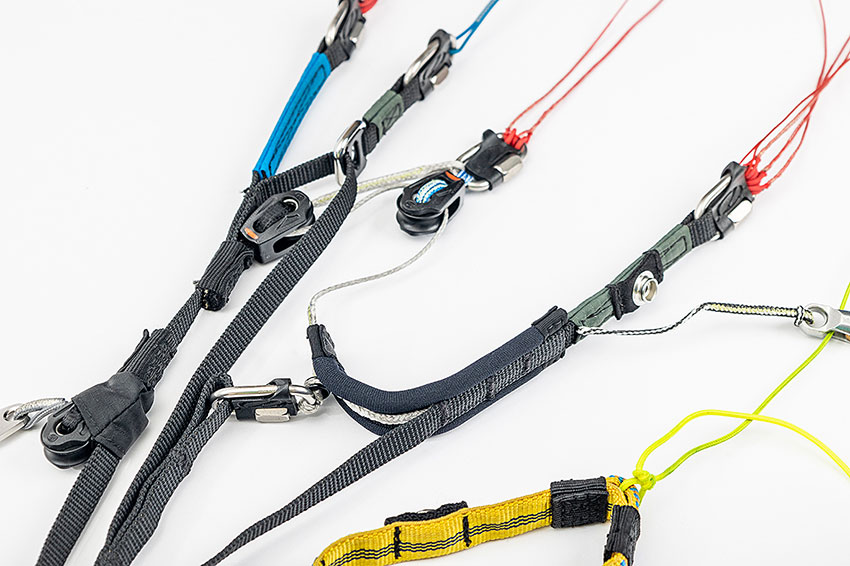 Materials wise it is made from the normal Ozone mix with top and bottom made from Dominico, and Porcher used for the ribs. The team have used a lighter material on the bottom surface and this, along with other changes, has meant a reasonably significant reduction in weight. The ML size I flew weighs 5.19kg compared to 5.5kg for the Rush 5, despite an increased cell count. This makes it lighter than some of its competitors: the BGD Base 2 weighs 5.4kg and the Nova Mentor 6 is 5.3kg. The wing comes in six sizes covering 55kg to 130kg so you should be able to find one that suits you.

The line set is completely unsheathed; this is a wing clearly optimised for cross-country performance. The only exception is a section at the bottom of the outer A lines, to make them easier to handle when doing big ears. This section is blue rather than the red of the rest of the lines so it stands out. 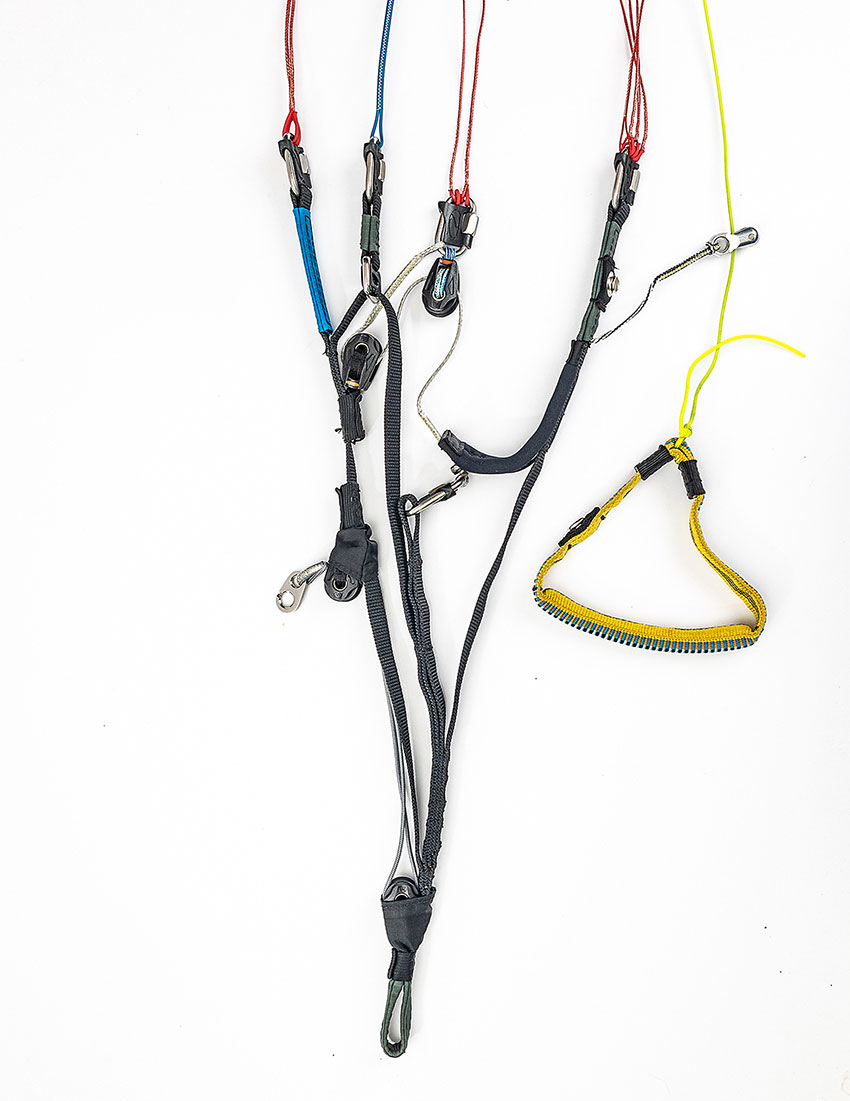 The risers are pretty much identical to the Delta 4 and sport Ozone’s ACR (Active Control Risers) system. Rather than a handle it has a section of padding where the C riser meets the Dyneema line that connects the B’s, where you can put your hands to feel the wing on glide.

Colour coding is subtle compared with some brands with none of the red/green marking you often see. There is just some blue material on the main A’s.

One thing that felt slightly unusual to me was that the brakes clipped into poppers above the Dyneema line that the pulley is on; the Delta uses the same set-up. 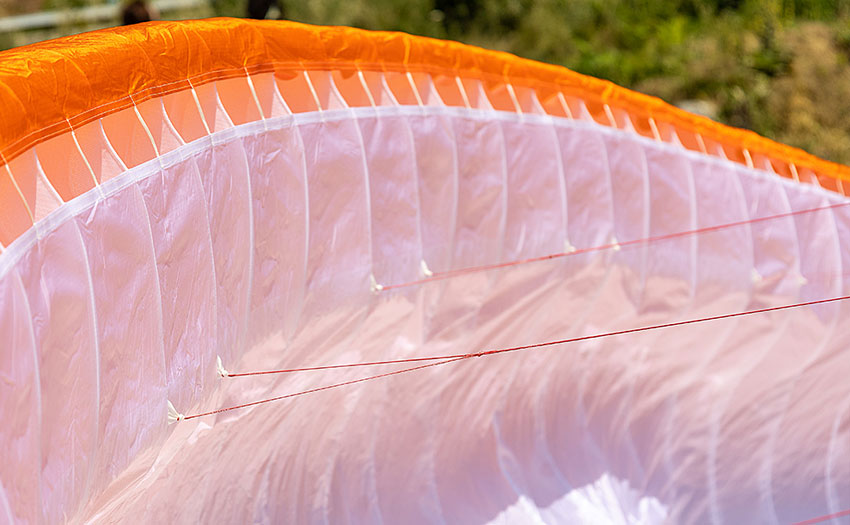 My first flight with the Rush 6 was at Ozone’s local testing site of Gourdon in the south of France and was in the company of their test pilot Russ Ogden.

I was a little primed for launch because I found the last Rush a little slow in coming up. However, Ozone have obviously worked on this as the Rush 6 rises that bit more easily. It still doesn’t race overhead but it just feels easier.

Like the previous model the behaviour remains the same in different wind conditions. I noticed that on my next flight at St André. When other wings were getting yanked into the air, the Rush came up smoothly and calmly, flattering my take-off skills. Some time spent in the landing field confirmed that the groundhandling is consistently undemanding.

Back to Gourdon and in the air it was very quickly obvious how undemanding this wing is to fly. It feels very comfortable in flight. It’s a solid feeling wing that acts as a cohesive whole. Ozone say they have worked hard on the internal structure to make it stronger. The result is the wing doesn’t flex much, there is no accordioning across the span in turbulence, and it cuts sharply through the air with very little pitching or roll.

To be honest this is behaviour that I found in both the previous version and the Delta 4. You would probably only notice any difference by flying the wings back-to-back on the same day – they all have the same solid comfortable feeling of cutting through the air. 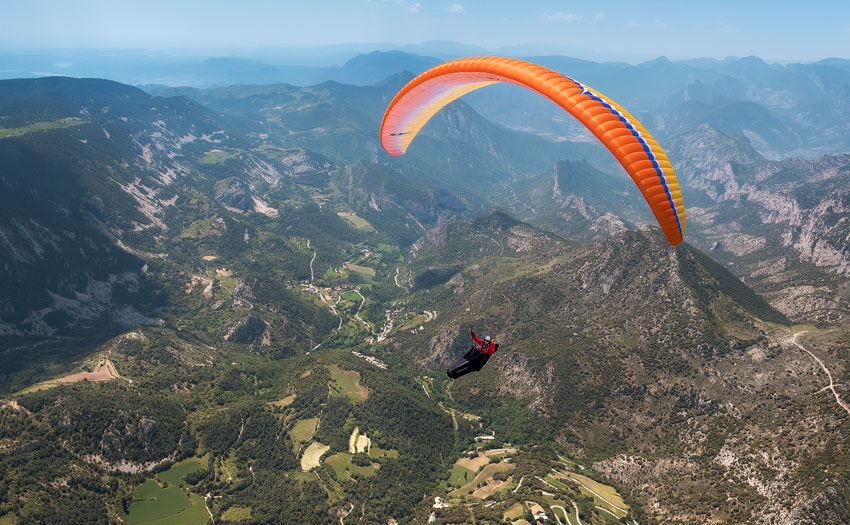 It actually has nicer launch behaviour than the Rush 5, which could feel slow to rise. In thermals the wing is a delight – there is handling, agility and comfort.

In thermals this wing delights. It combines its solidness with great handling to help you climb efficiently. There is great agility in the initial turn but then you also get a good feel for what the tips are doing through the brakes. It helps you feel the air without losing any comfort as there is none of the jiggling through the risers you get on some wings, just smooth pressure with the detail coming through your hands.

It’s a year since I flew the Delta 4 but I get the feeling the Rush 6 beats it in terms of feel. The Rush allows you to place it precisely where you want in the lifting air. Once turning the wing doesn’t need much correcting. It’s a combination that gave me great confidence in my climbing, and I started to expect to out-climb everything around me.

The ease of use is evident when coming back down too. I finished my first flight spiralling down to top-land. In the spiral the wing is easy to control and I found it easy to bleed off the energy for a smooth exit. Coming into land the progressive brakes with lovely feel made timing the efficient flare simple. Landing was just as smooth as the launch. 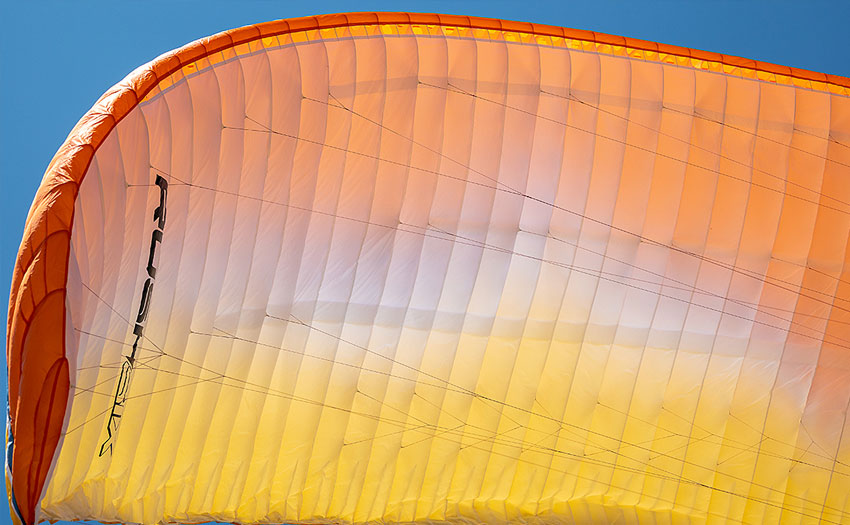 A few days later the forecast saw us heading to cross-country mecca St André-les-Alpes to fly the Dormillouse run. This is a classic 100km out-and-return to the fort on the northern end of the Dormillouse ridge and back again.

The first 15km or so is straightforward: get high then head north along the take-off ridge. However, conditions were quite stable with people struggling to get good height. Seeing some vultures and a solitary wing climbing out in front I took off, heading straight towards them. Observation paid off and by the time we drifted back to the ridge we were top of the stack and in a good position as conditions turned on.

I took the quick route, via the Côte Longue rather than working up and round the Cheval Blanc. Normally this works really well with thermals drifting back along the crest of the ridge. But on this day it was obvious that there was more north wind than expected, leading to wind-blown leeside style conditions. The Rush 6 dealt with this well and gave me the confidence to grab a thermal and hang on to it tightly as it ripped out of a small low ridge.

I was able to hold on to the climb well and as it got higher widen the turns as I got to near base. I pushed north with a Zeno, making sure I kept my height as I saw three wings in front get flushed by the north wind and have to run back south, tails between their legs. The Zeno and I pushed onto the north-facing ridges, he pulled away but there was a lot of shade and I decided it was time to change to slow-and-careful gear. A sailplane climbing in the murk gave me an obvious target and the climb took me to base and an easy glide to the main ridge.

Once you are high here it’s a glide along the ridge making the most of lifty lines to make quick progress. The ACR system on the Rush 6 is perfect for this style of flying. It gives a really good feel for the wing and is light enough to use it to slow the wing in the lifting sections. This system is used on the Mantra 7 and Delta 4 and works really well. The padded area is the perfect place to rest your hands on glide and, as I said, gives you a good feel for what the wing is doing.

I spent a lot of time on the flight cruising at half-bar or above and the ACR system gives you the confidence to do this and also the ability to properly slow up in lifting air. The lightness of the system translates to less fatigue and in wider lift I could use it to thermal while keeping the efficient shape of the profile.The verdict

Performance is always hard to judge but what I can tell you is that I flew mainly in the company of EN C and above wings and never had that feeling of always playing catch-up, far from it. This really is a baby Delta 4. It feels similar, and it has very similar performance. I am sure there is a slight difference at full speed but in real flying, the line flown and the pilot are going to make a much bigger difference.

What is for sure is the ride is comfortable, so you won’t feel tired after a long day out. It’s a wing that makes me really question what level of glider I need to be flying. Do I really need a higher-certification wing when there are options like the Rush 6? In the past I would have been worried about missing out on the handling not only the performance, but the Rush 6 has plenty of performance and lovely handling. It’s great to see the latest 3/2-line technology make its debut in such an accessible glider.