With a significant evolution in technology, the Mentor 7 Light offers a step up in performance from the Mentor 6. All photos: Erwin Voogt / Bastienne Wentzel
EN-B, Reviews

Nova’s Mentor story continues with the release of this high-tech, high performance, high-end EN B. Erwin Voogt and Bastienne Wentzel flew it.

The Nova Mentor 7 Light, released in March and with genes of Nova’s two-liner Xenon, is a “hybrid 2.5-liner” – a construction that is supposed to bring two-liner technology to the EN-B class. It means that there are no outer C-lines. The tips have only A and B attachment points, effectively making the tips a two-liner and the centre of the wing a three-liner.

The compact bundle we received just before leaving on a trip through the Alps is, at 3.9 kg for the XS (up to 95kg take-off weight), even light enough for the occasional hike-and-fly. Even better is that the Mentor 7 Light looks, feels, handles and flies like a full-fat wing. There are no compromises of weight versus ease of handling such as softlinks or shoelace risers and most of the lower lines are sheathed.

The fabric (Skytex 38 in the nose, the lighter Skytex 27 in most other parts) does not feel extremely vulnerable. But most of all, in the air it doesn’t rustle or jitter as much as some lightweight gliders. There is a mild sharknose and rods to support the B- and C-lines as well as in the nose. It has a high cell count of 66 and a moderate aspect ratio of 5.5. 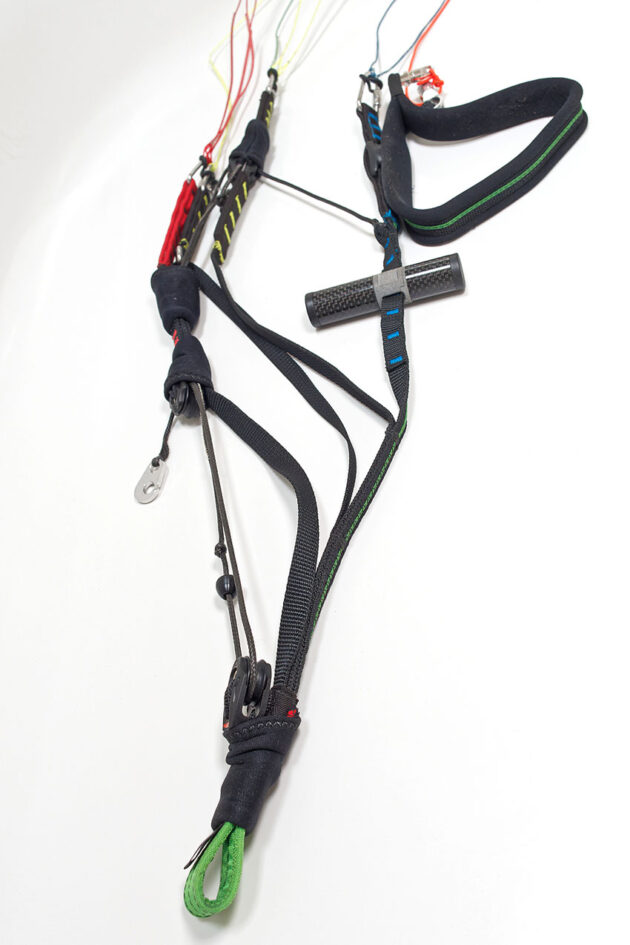 The risers are standard 12mm black Kevlar tape with wide colour-coded loops. Closer inspection reveals a number of remarkable features. The first one is the carbon bar for C-riser control, instead of a loop or bridge on the riser.

The bar can be put in six different positions according to the pilot’s arm-length and preference, by undoing the bolt inside. It’s an easy procedure and works well. We did find that the bars occasionally get stuck between the risers while launching, so you have to untangle them in flight.

Second, the A-riser is not split but the B-riser is. The outer B-riser, the so-called B3 or baby-B, clicks onto the A-riser with a fairly strong magnet. Philipp Medicus, Nova’s lead designer, explains: “The magnet serves to make the riser cleaner. Without it, the B3 tends to tangle on launch.” They also hoped it would facilitate launching, which we found it did. 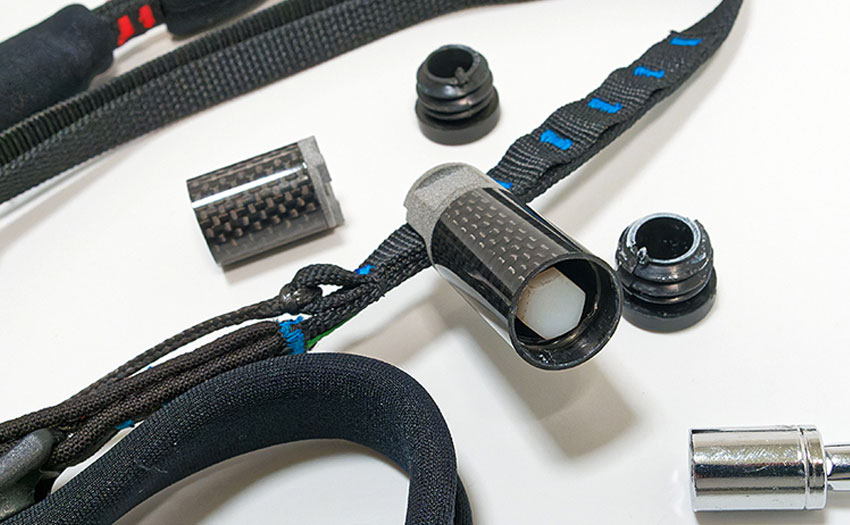 The carbon C-handle can be set in six different positions according to the pilot’s preference and arm length. The easy procedure involves undoing the bolt and nut inside

Finally, the speed-bar travel is at 21.5 cm much longer than average. This is needed to use the full potential for acceleration for a wing with this aspect ratio, says Philipp. There is a separate adjustable speed system delivered with the wing. With it you vary the speed-bar travel by moving a knot which holds a bead. The adjustment is easy but essential, because the speed-bar travel is so long that only the longest legs would be able to push full bar without it.

The main B-riser is also very long, about 5cm longer at trim than the A, B3 and C risers. Philipp explains: “We wanted the long speed travel and for the C-bars to be high up for better ergonomics. Then geometrically you end up with this long riser.” 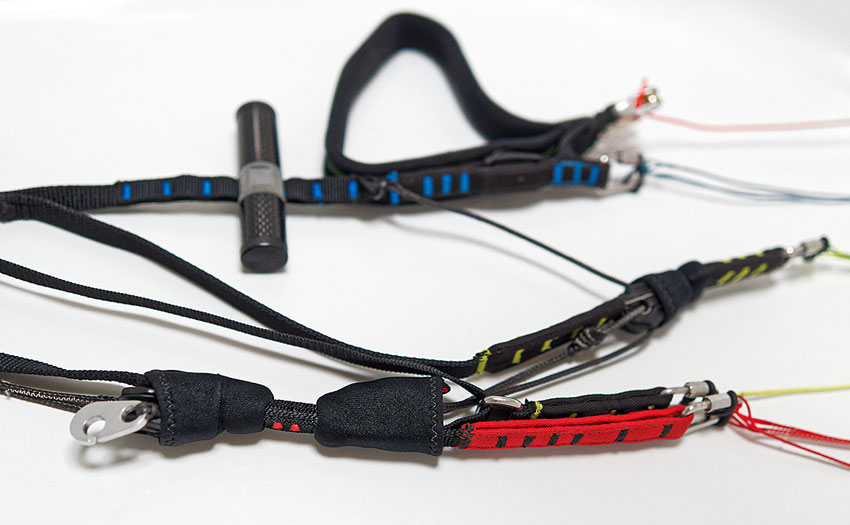 The red A-riser and the B3-riser click together with a strong magnet making the risers easier to sort on launch. You can launch with both or with just the A’s

We were advised to read the Mentor 7 Light’s manual carefully. We read about flying with the C-handles on full speed, pulling a B3-stall instead of big ears with a split B-riser and dealing with a hybrid 2.5-liner which is supposed to feel a bit like flying a two-liner. It all sounded impressive. What kind of beast were we about to fly?

The actual first take-off was almost underwhelming. In fairly strong leeside conditions, the wing inflated calmly and controllably and took off without a fuss. Over the next few weeks, we launched in a large variety of conditions, from run-with-a-backwind to fierce windblown thermals, all without problems.

The A-and-B magnet combination feels like a heavy handful on launch but leaving them together actually made launching easy. Philipp said this method may increase yaw on launch, but we didn’t find this a problem. Using only the A-lines, the tips inflate first and the wing overshoots more easily. The choice how to launch is yours.

In strong wind conditions, the wing comes up symmetrically without needing much lateral correction. Stopping the glider overhead with the brakes results in a bit of lift as normal. Using the C-risers to stop the glider you need to be symmetric. Asymmetric corrections or steering with the C’s doesn’t really work because they are not attached to the tips of the wing. 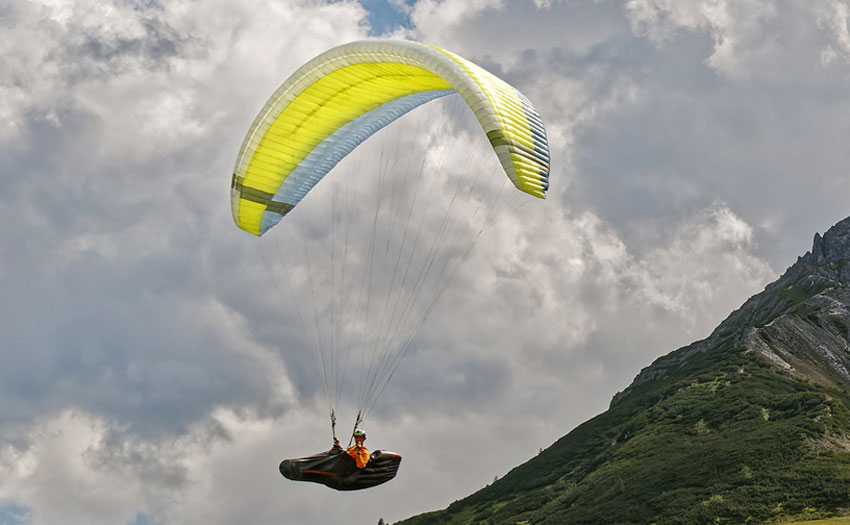 Expecting a ‘big’ glider needing attention and handling like many high-end B gliders nowadays, the Mentor 7 Light is almost too easy to fly. We can’t recall anything larger than a small tip tuck in big-Alps summer thermals. The canopy is very pitch stable and doesn’t need much correction to stay exactly overhead. It just seems to sort itself out and you quickly forget it is there. This saved us a lot of energy and made it easier to fly longer.

The brake pressure is average, a bit heavier than most lightweight gliders we have flown but certainly not heavy. The glider responds intuitively although not extremely fast to inputs. It is dynamic as expected in the B-class and fun to fly but not overly playful or rolly. Pitch stability also means it doesn’t pull into thermals as strongly as some. It gives enough feedback about the air but it is not an extremely chatty glider, which adds to the experience of forgetting the glider is there so you can concentrate on everything around you. 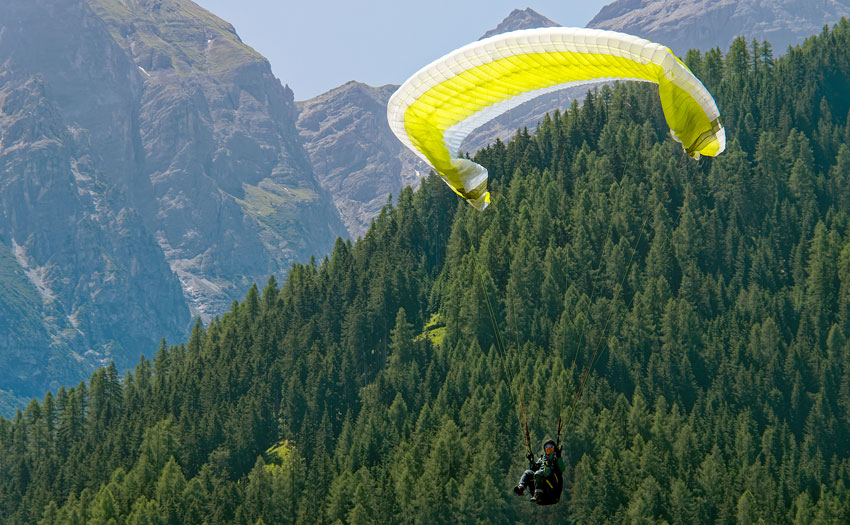 Because the glider is a 2.5-liner, Nova suggest pilots use the B3-stall rather than big ears. You pull ‘ears’ with the baby-B riser, which is bright red for easy identification

The main feature of the glider according to Nova, is the performance on speed. The hybrid 2.5-line set-up should make C-riser control effective and the bars are supposed to make you feel like you are flying a two-liner.

The speed bar runs light and smooth, even the last centimetres where the bead kicks in if you have shortened the travel. Moreover, the glider feels so stable on full bar that we both found ourselves automatically pushing more bar for longer.

It feels very natural to use the C-bars for course corrections while on speed. The force needed is definitely lighter than other rear-riser-control systems we tried. On top of that, the efficiency of the Mentor 7 Light on bar we found pretty amazing.

Although these comparisons are notoriously tricky, we glided on full bar tip-to-tip with another new high-end EN-B and with an older EN-C, both higher aspect ratio. The Mentor 7 Light performed consistently better: not necessarily faster but definitely with a better glide.

To get down fast, you have two options: a spiral dive or big ears combined with speed if needed. A B-line stall is not possible. The spiral dive works fine on the Mentor 7 Light, although, as always for gliders in this class, you need to pilot the wing into the spiral and out of it.

Pulling big ears without the split A-riser, you have to reach very high up to grab a thin A-line which is under a lot of tension. Pulling the big ears in this way is not exactly comfortable but works fine, they are stable and have a decent descent rate, although they need some convincing to pop out again.

Nova introduced the B3-stall as an alternative. You pull ‘ears’ with the baby-B-riser which is bright red for easy identification. As Philipp explained: “We needed the split B-riser anyway for the 2.5-line setup. Another split A-riser would complicate the riser further. The B3-stall works well and we thought it would be cool for pilots, as a B3-stall is used in two-liners as well.”

The method takes a bit of practice: you need to pull both sides quickly and symmetrically. If not, the glider dives one way remarkably aggressively. A pilot who is used to pulling ears gently one-by-one can easily make this mistake and get a scare.

We also missed the possibility to regulate your descent rate by pulling the ears larger or smaller, use big big-ears or pulling just one ear, for example when top-landing. The B3-ears are very binary: in or out, those are your options. If you let go of the B3-risers the ‘ears’ pop out immediately. 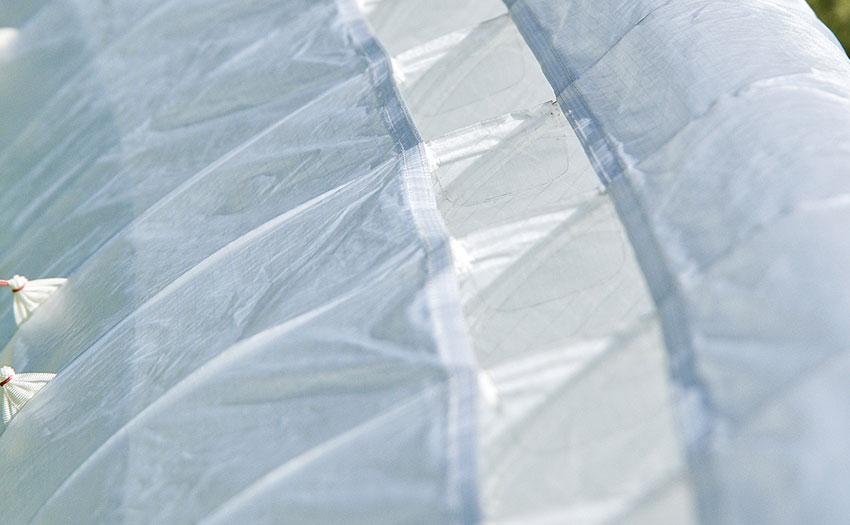 The mild sharknose (called Air Scoop) is kept in shape by a rod over the nose and one down the lower surface. The A-lines are set back

The Mentor 7 Light earned our trust over many flights in difficult conditions. Being so easy to fly, it saves the pilot a lot of energy, making long XC flights less exhausting and thus safer. The technology sounds impressive and during a first demo flight you might be intimidated. But it is really a benign high-B glider, especially for the performance it provides on full bar. A big plus is the handling: it has all the advantages of easier handling of a lighter wing, but none of the disadvantages such as a delicate build or jumpy behaviour.

Nova have announced a full-fat version will arrive later. The only difference will be heavier, abrasion-resistant fabric for use on less forgiving launches than grassy hills. Other than that, we really don’t know what one could possibly want different in a full-fat Mentor 7.

Both our review pilots flew the Nova Mentor 7 Light XS during a month travelling through the Alps, altogether for about 25 hours. Erwin flew with the Skywalk Range X-Alps 2 pod harness at an all-up weight of about 84kg. Bastienne flew with the Skywalk Cruise sit harness with seatboard at 80kg.