The Gecko was designed to bridge the gap between the beginners’ Malibu 2 and the more advanced Litesport in the Moyes range. Features include a 7075 T6 aluminium alloy tubing airframe, which makes the glider responsive to weightshift. Carbon trailing edge battens are there to reduce flutter at speeds. “The perfect intermediate glider to introduce pilots to XC flying, with a powerful VG on an otherwise intermediate planform,” say Moyes. Richard Sheppard tries one for himself.

All photos: Carl and Michelle Wallbank

WHEN I FIRST saw the Gecko waiting there on Croft airfield, sat on its tail, it looked squat and low next to the sleeker, somehow taller Litesport and Litespeed thoroughbreds. Its baggy looking and brash yellow, grey and blue Dacron sail suggested 1980s performance and I immediately thought back to the days of the very first fifth-generation gliders. Comparing it against its higher performance stablemates, I did wonder if this wing would be anything other than the hang gliding equivalent of a donkey in a steeplechase.

I walked over and had a closer look. Well, there was no doubting that it was a very well put together little donkey. Everything on it looked as if it had been designed and made for the purpose for which it was intended. In fact it had all the usual refinements that modern flying people expect to see on a modern high-quality flying product. Suffice to say you won’t find a single item of cheap rubbish here: The batten ends are the usual Flip-back type originally designed by Gerolf Heinrichs and widely copied throughout the hang gliding world. The tubing is all industry-standard 7075 T6 and the sprogs, of which there is only one per side due to the inclusion of luff lines inboard, are three-quarters of the way out along the wing and manufactured in carbon fibre for reduced mass at the tips. 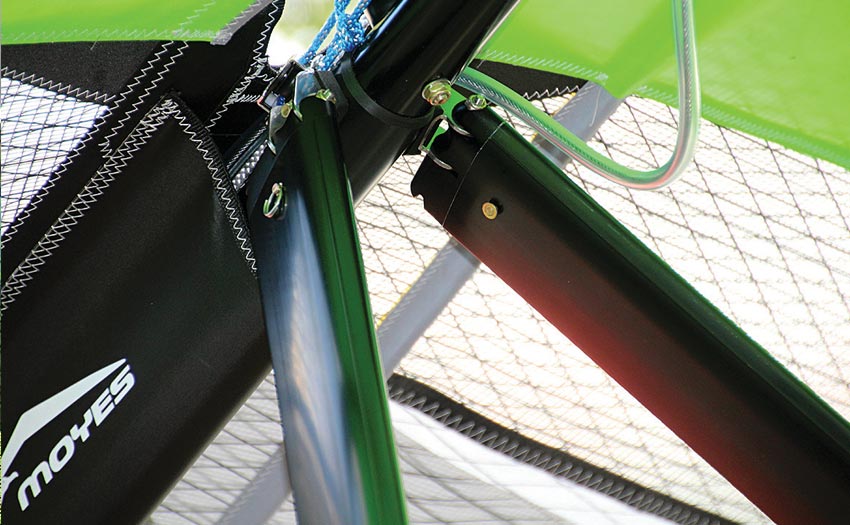 The VG is coupled to an ingenious mechanism within the king post so that as the VG is relaxed, the upper side wires rise up thus taking up the slack in the wires and providing extra reflex from the luff lines at the same time. Rigging is straightforward and the wing can be rigged on its A-frame or, for those who live in windier climates, rigged laying flat.

It has the normal Moyes curved tips facilitated by the use of a tensioned composite tip wand. There is also a span-wise pocket on the trailing edge near the tip. This accepts a Mylar insert that must be installed on rigging – presumably to prevent flapping at speed. It seems a bit of a faff having to take it in and out every time you fly and it’s a shame this couldn’t be achieved by other means. But there you go; not everything is perfect and I am basing this negative observation on my own innate ability to lose things! The sail of the glider I was looking at is all Dacron although it is available with PX Mylar leading edge and Moyes Technora mainsail. I understand that the 170 version is only available in Technora. Whatever the material, the sail work is absolutely first class. 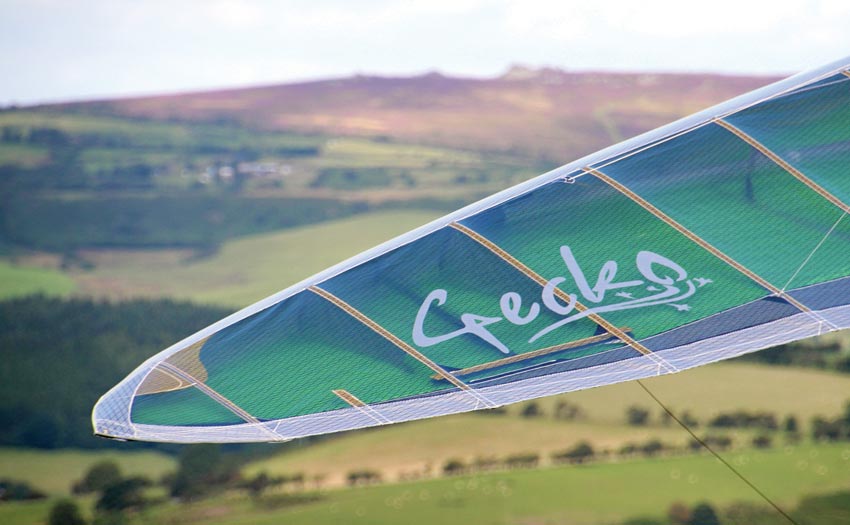 As standard the sail is all Dacron, with an option of a PX Mylar leading edge and Technora mainsail

‘Extraordinarily elegant’
I pulled the very light VG on and it suddenly looked more swallow-like. The wing is actually an extraordinarily elegant shape for an intermediate glider – It tapers more than the other higher performance gliders and has a modest aspect ratio of 6.5 and a nose angle of 124 degrees. The curve of the leading edge profile looked particularly pleasing – none of that hooked witch’s-nose shape you see on some intermediate gliders. Picking it up revealed a slight nose-heavy feel on the shoulders and, due to the clever side-wire compensation system, no wobbles in roll. At a quoted weight of 29.5kg the wing felt comfortably agile on the ground.

Someone said I should have a go on it: That someone being Moyes UK dealer Carl Wallbank. Well, not wishing to disappoint him, I had to acquiesce. At 84kg in my undies I’m towards the top of the weight range for the 155 – but it’s still quite a bit bigger than my Combat 13.2. 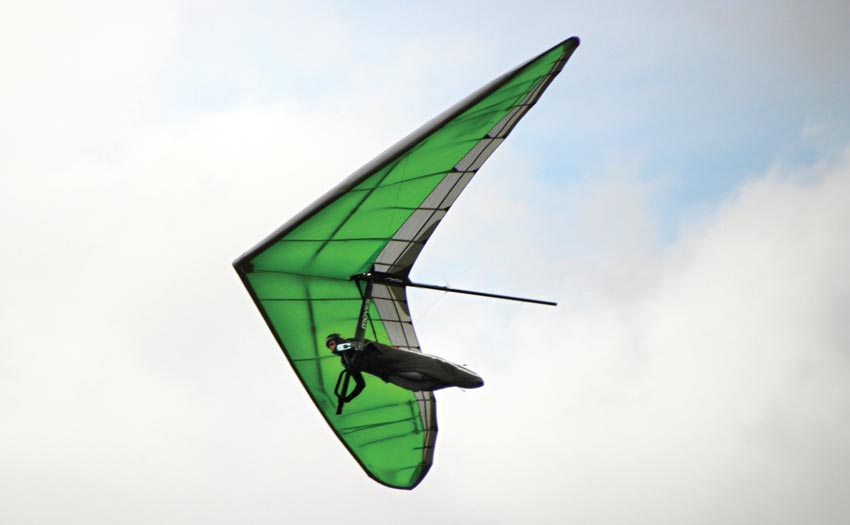 “There is a slight nose-heavy feel on the shoulders and, due to the clever side-wire compensation system, no wobbles in roll. At a quoted weight of 29.5kg the wing felt comfortably agile on the ground.

The windsock was slowly pirouetting around the pole and I thought back to my last landing on the Combat at the airfield, which turned out to be a slightly violent downwind affair when the wind suddenly decided to blow the other way. How much are Moyes uprights? And it is bigger than my Combat… Ok, I’ll give it a try… The Malvern Aerotow Club, based in the flatlands of the Severn Valley in the West Midlands of England, is blessed with a Foxtug – probably the greatest ever hang glider towing machine ever to grace the skies. Ever. It’ll take you up at a thousand feet per minute at 28mph (40km/h). No problem.

So I got myself and the gaudy Gecko onto the trolley and off we went behind the Foxtug with the VG set to half. As soon as we left the trolley it was obvious that I was going up to 2,000 feet without actually putting my brain to much use. The pitch was light, the roll response excellent and there was absolutely no adverse yaw. It followed the little Foxtug like a donkey giving a ride at the seaside. 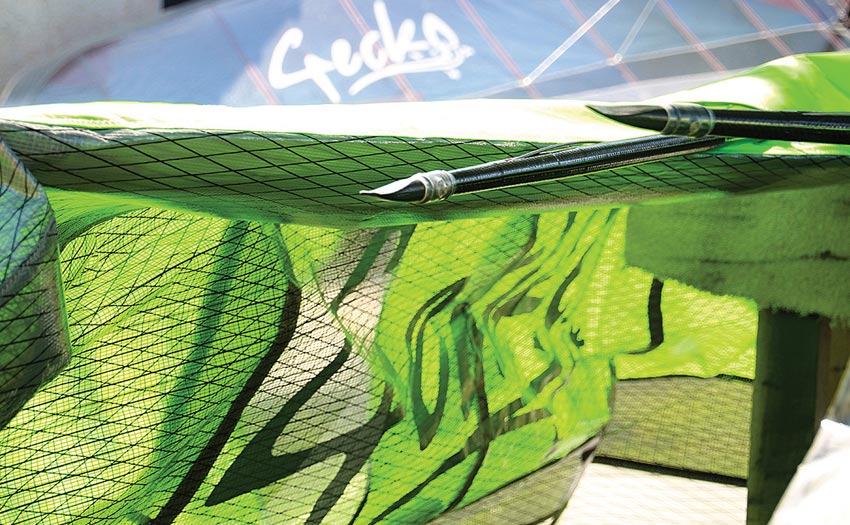 Carbon-fibre dive struts are almost half the weight of alloy

In the air
A couple of minutes later I was releasing into a thermal and climbing away. The thermal was bitty and required quite a lot of re-centering. The wing, still on half-VG, responded to my movements immediately. I don’t think I’ve recently flown a wing where I didn’t detect an ever-so-slight swing away from the initiated turn during the first half-second or so. With the Gecko I felt nothing. It just banked to my command. I remember thinking, “This is great!”

Pitch coordination must have been ok too. I say must have been ok because I didn’t notice that it wasn’t ok. Things stand out when they’re wrong– and not when they’re right.
After a while I decided to leave the thermal and, pulling VG on full tight, set off on a glide. Pitch was very light and it was effortless to hold a fairly decent lick for as long as I needed to. Again, the glider tracked as straight as an arrow (probably straighter thinking about it). The sail looked tight with no flapping and the under-surface was as smooth as an inverted billiard table: Beautiful.

Then I decided to see what it was like at full-on bar-at-the-fingertips speed. Again pitch remained light as the wing slanted down steeply and picked up speed. I don’t know how fast it went but the tips started to flap a little and the rigging went loose a couple of times as we rattled through the bumpy air. But the glider felt good and still easily controllable – and straight. I let the bar out into a gentle climbing turn to bleed off the speed. Pitch remained undemanding and light and at no time did I feel the bar pressure was trying to intimidate me. 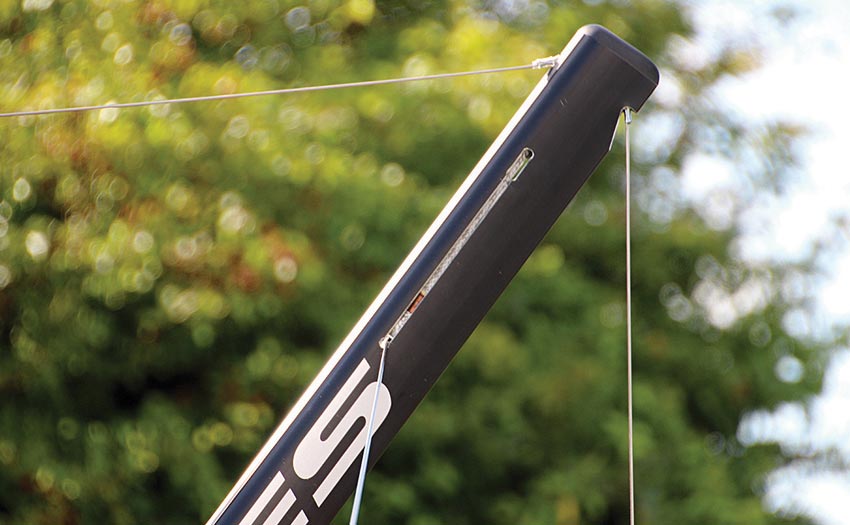 I think a good test for a wing’s handling abilities is to put it through a series of steep alternating wingovers. With some wings you seem to find that there is a natural rhythm developing because, as you exit the first dive from the wingover, the glider wants to yaw into the opposite direction – and so you initiate the following roll to synchronise with this yaw to take it into the second turn. With the Gecko this didn’t happen. If I wanted to go straight for a bit longer, then I went straight. I didn’t have to let the wing dictate when I turned. That, to me, is a delightful thing.

I realised that at no time had I flown it with no VG. So I let it off and flew around for a bit. I didn’t really like it. It felt mushy and indistinct. I did push the bar out though – and got to a point where I was almost at full stretch and yawing my body around, trying to keep going in a straight line. It was very benign. I’m afraid I didn’t feel brave enough to stall it at full VG although I’d be surprised if it offered any surprises. 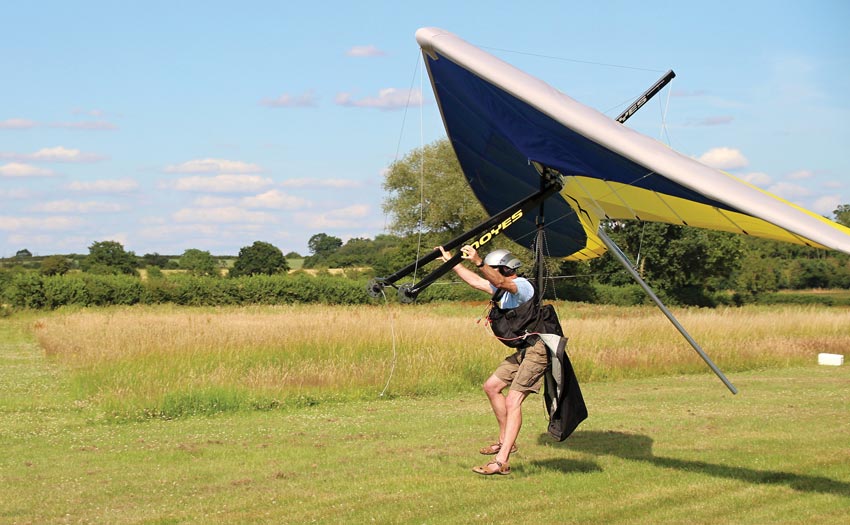 Smooth landing. The grey and blue Dacron sail. You can choose from 14 different colours for the top and bottom sail, three for the leading edge

Landing
My landing was terrible. Not having flown for three months and not having landed properly for even longer, I was a bit out of practice I guess. Anyway, I misjudged it and pushed out way too soon when the glider felt slow enough to flare. I instantly pitched up several feet, held it there and came down like a – well I don’t know – a fat donkey. Splat. But nothing broken except my spirit.

Carl insisted I go up again, if only to prove that I could land a hang glider. So I did… And I did. The Gecko looked after me as we played in the thermals way above the airfield and didn’t even mind when I made a last-minute turn at fifty feet as the wind swung through 45 degrees during my landing approach.

I love it when I can write a review like this. There are no embarrassing ‘Don’t go there’ areas I should avoid writing about or treat with a certain amount of vagueness. It’s just a lovely, lovely wing. You obviously won’t get a 15:1 glide (but not far off I feel). You won’t get 70mph zooms. What you will get on a Gecko is hours of fun and a deep satisfaction of a flight well flown. And I do love that blue and yellow Dacron.