The Gummfluh (“Gum-flew”) is a lightweight low B. It’s the first mainstream wing from Flyfat, who have a background in mini, acro and freestyle wings Photos: Marcus King
Reviews

If you haven’t yet come across Flyfat and their bright, stripy wings, then it’s time to get acquainted. They are a Swiss brand, at the core of which are acro pilots David Gétaz and Lucas Borgeaud. The brand is named after the Fat Acro Team that they flew in for almost a decade from 2001.

As wing designers, their initial focus was on wings that are a bit out of the mainstream: for the mountains, coastal soaring, freestyle, acro and speed flying. With the Gummfluh they are edging more into the everyday wing market. It’s a lightweight low EN-B, for leisure pilots and hike-and-fly, and is named after a (2,548m) mountain near their design office in Château-d’Oex in the Gruyères region of Switzerland.

The first Flyfat wing was put together in Lucas’s garage but they’ve come a long way since then, and now Flyfat wings are made in Sky’s factory in the Czech Republic. Made, but not designed: David and Lucas design Flyfat’s wings, although there is a strong link with Sky in that David used to be Sky designer Alex Paux’s test pilot, and they are friends.

The Gummfluh is available in five sizes from XXS to L, which caters for all-up weights starting at 45kg, up to 115kg. Flyfat recommend flying in the middle-to-high part of the weight range. I fly at around 70kg all up so the XS size (55-75kg) was a perfect fit. As standard the Gummfluh comes with straightforward risers, but Flyfat sell trimmer risers as an option.

The test wing came with the trimmer risers, and the warning that the wing is only certified EN B with the trimmers closed, and that they should be used as an alternative to the speed bar, not as well as. 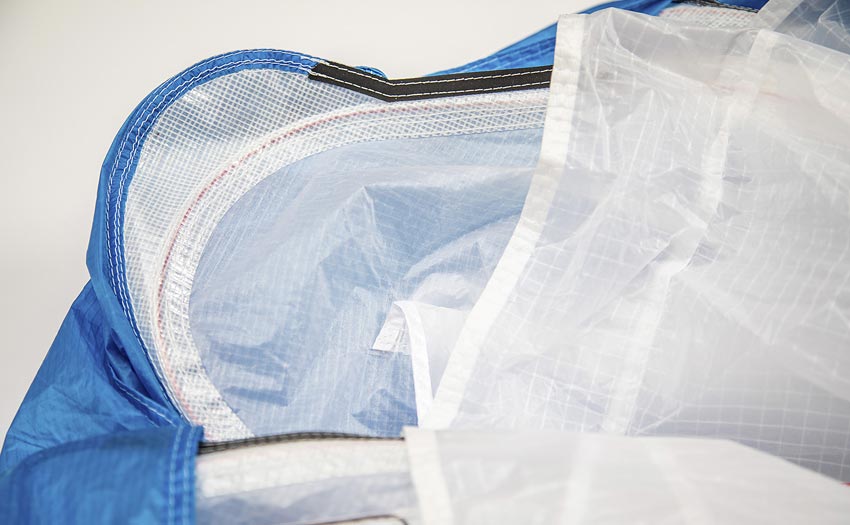 Mylar in the sharknose

The Gummfluh is a semi-light wing (a Geo rather than an Ultralite, to borrow Ozone for an analogy). In my size it weighs 3.4kg. “We wanted a ‘real’ B wing that was quite light, but also had a good possible lifespan,” Flyfat’s David explained.

They chose Porcher Skytex 32 for the upper surface, and 27 for the underneath. The leading edge has a slight sharknose, with plastic rods and mylar reinforcements. The lines are sheathed Edelrid 7850 and Liros PPSL, which the company say they chose for their resistance, low weight and stability. 13mm webbing risers are colour-coded to match the lines: red As; blue Bs (green stabilo); purple Cs. 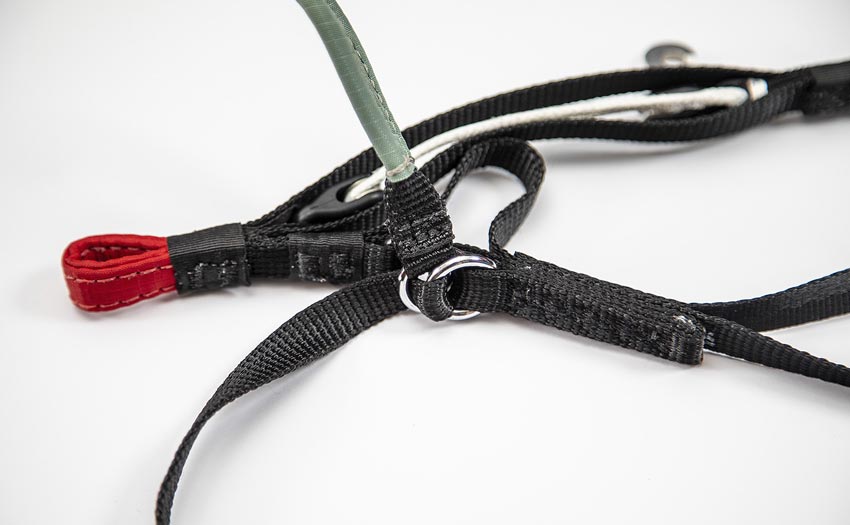 The wing is certified EN B with trimmers closed

The trimmers have a range of six centimetres, and use a lighter interlocking ring system rather than the toothed cleats you often see on tandem trimmers. Two coloured handles (one grey, one yellow) make it easy to apply and release them. The brakes have soft, lightly padded handles, with swivels to prevent twisting and popper keepers.

The colour scheme is the same on most of Flyfat’s wings. It’s bold, bright and striking, with the safety bonus of being easy to see. Four stripes radiate out from the centre, concentric circle cut-outs, bulging like the FAT logo and extending all the way from the trailing to the leading edge. 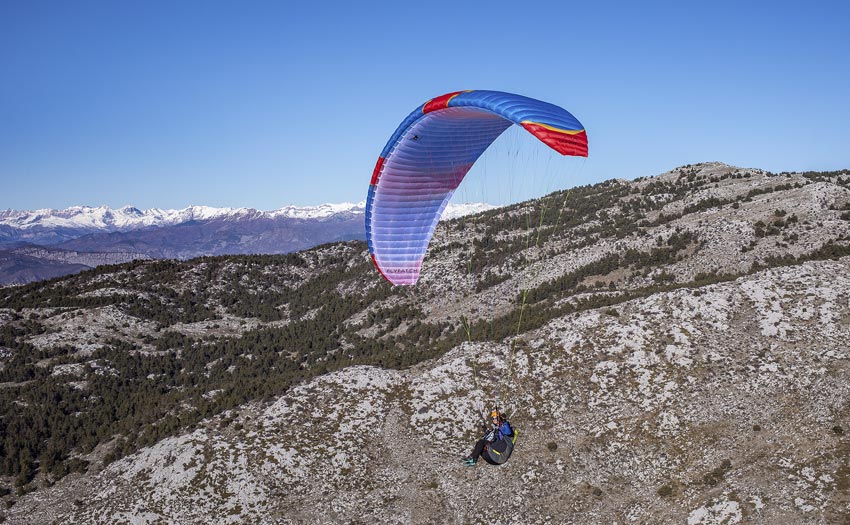 The joy of life is strong in this one. Although it’s aimed at newer pilots, the glider will keep many more entertained. “Responsive, nippy and safe.”

I didn’t find the opportunity to ground-handle the wing in the landing field before the first good day came along, so I carried the as-yet-unpacked wing to launch, so far ambivalent to it and with no preconceptions.

My affection for it sparked as I unfurled the wing and reached the centre, where Flyfat have printed their caped cow logo. Haha, brilliant! (I know, small things please small minds).

That affection grew throughout what turned out to be an unforgettable flight on a brilliant November day at our local site. Not a stonking XC day, but a day with some strong thermals and an area of convergence just along the ridge from launch, where the biggest flock (apparently it’s called a kettle) of vultures I’ve ever had the pleasure to circle right in the middle of, converged at one point.

It was the kind of flight that had people whooping at each other from the air, where picnicking mothers had to cover their children’s ears to shield them from the expletives from the landing pilots, expressing just how good a flight they’d just had.

To be fair, it would have been brilliant on almost any wing. But I wrote in my logbook, “Love the wing so far! It’s intuitive, and it feels fast. I overtook a Buzz Z4 on the ridge!” Although I realise overtaking a previous-generation EN-B wing isn’t everyone’s measure of “fast” in a paraglider, it’s rare for me, presumably because I fly wings in small sizes.

I took the Flymaster TAS speed probe out with me on the next flight and measured a hands-up speed of 32km/h and full-bar of 42km/h, which is actually the same as I measured on AirDesign’s Vivo and a bit lower than Flyfat quote: 37km/h hands up, 42km/h trimmers out, 47km/h full bar. In subsequent flights I always had the impression that it was pretty good on speed, and that it coped well into wind. 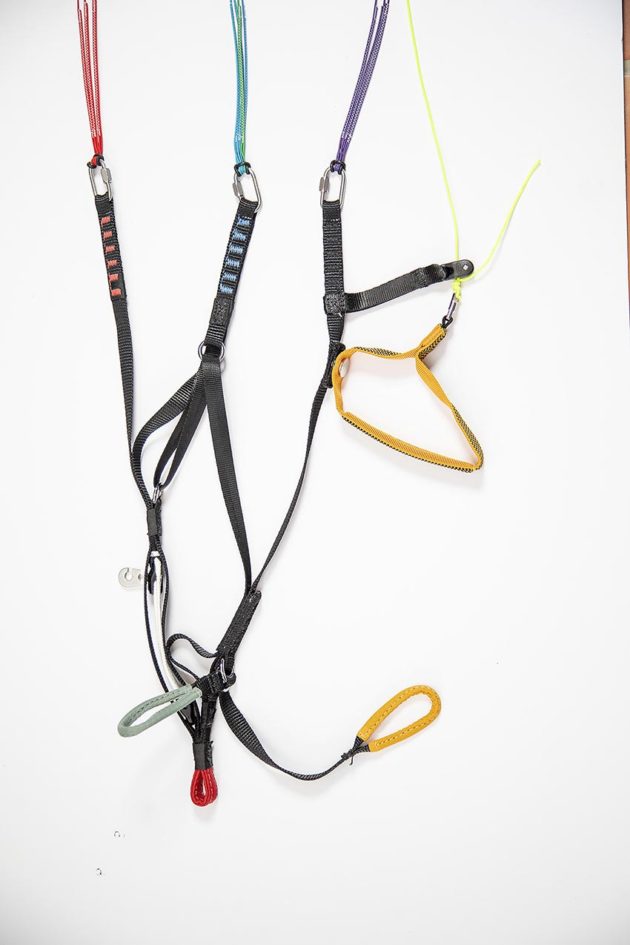 The riser set-up, with sheathed lines and trimmers

But let’s back up a bit, to the preparation and launch which were a bit easy to skip past because they were easy to skip past, if you see what I mean. The sheathed lines are nice and easy to sort, not too tangly, and the sail feels light and comes up easily but slowly with no tendency to overshoot, so it’s easy to manage and bop, you’re off, no dramas.

On all subsequent launches the wing always behaved itself even if I didn’t, and we had some tricky ones. A period of nil- and backwind hike-and-flies where I displayed some bad piloting choices but the wing looked after me. Turns out it’s happy to forward launch in light or backwind conditions, even if as a pilot I shouldn’t have done it. One backwind launch lead to a fly-down in air that was definitely descending – it was a bit turbulent and not the nicest, and I should have walked down, but the wing remained solid; another where the wing got rolled over and over by a backwind while I was in the harness.

I walked over to unroll it without unclipping, and then fully committed to a fast forward launch, realising as I left the ground that I had a not-insignificant cravat.

I got away with it, but it was stupid and I had sharp words with myself about always checking the wing in future. The wing looked after me, but the broken line would suggest I did not return the favour. Sorry Flyfat (they were very nice about it), lesson learned. 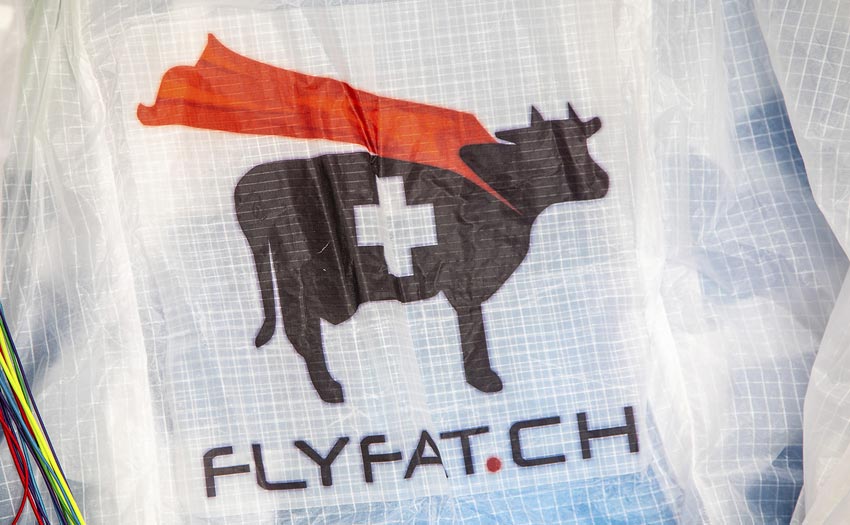 Right from my first flight with the Gummfluh, I found it intuitive. We understood each other.

The brake pressure is fairly light but the steering direct. It climbs really nicely in thermals, and remains pressured and confidence inspiring.

I felt as if I was able to thermal it smoothly, although it moves around more in the air than the Atlas 2 or Leaf 2 that I flew recently, a characteristic of lightweight wings I think.

It doesn’t seem to have any tendency to get knocked back on entering thermals as some wings can seem to, and the only thing resembling a collapse that I had in my whole time on this wing was one wingtip flutter, where I had ‘left it behind’ at the edge of the thermal.

I tried big ears – there is no separate riser – and the ears are quite big. The wing swings around a little bit when you pull the first one in, but then stabilises with both in. I found no change in speed with the ears in, and they roll out as soon as you let go. 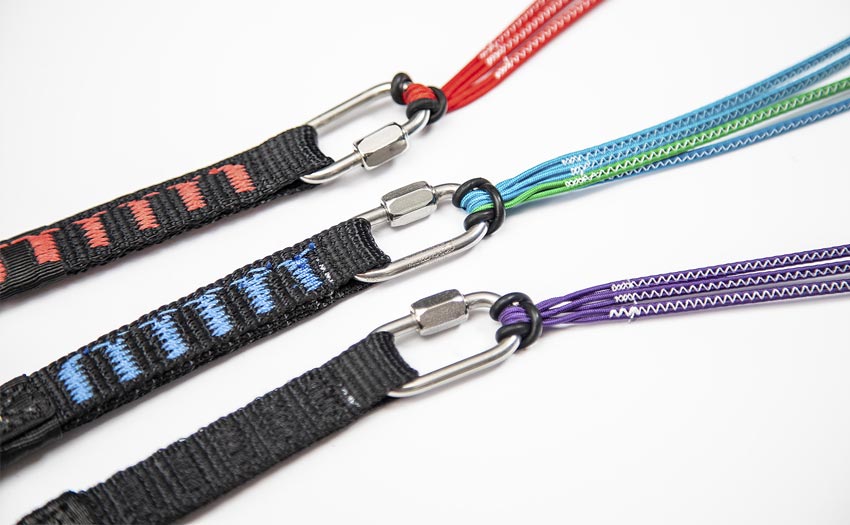 I think this is a wing that, from the flying cow on its leading edge to the brightly striped sail, is full of fun and joie de vivre. It’s a pleasure to fly, responsive, nippy, and safe. It’s light enough for hike-and-fly, with great handling for everyday which means, to me, it fulfils its brief perfectly.

The Fat Acro Team started out in 2001 as a group of four friends including David Gétaz and Lucas Borgeaud, eventually swelling in numbers to 15. David and Lucas were synchro partners from 2003 to 2008, flying in high-level competitions including Red Bull Vertigo.

They started making radio-controlled paragliders together in 2006, assembling the wings in Lucas’s garage. The models got bigger and bigger, and in 2011 they had a 12m2 ground-handling wing.

At the time David had a student holiday-job working for Alexandre Paux, designer at Sky Paragliders and MCC Aviation. He was a test pilot and check-and-repair technician. Alex showed interest in their ground-handling wing, and invited them to the Czech Republic where they finished it together as the Sky Eole.

With Alex’s encouragement and support, David and Lucas continued designing and created the Flyfat brand, releasing their first certified wing, the Tayo (a mountain mini-wing) in 2016. David continued as Alex’s assistant until 2017, which was “a great way to learn how to design wings”.

Flyfat’s range now includes a lightweight version of the Tayo, the Tayo H2; and the Tayo Freestyle for beginner freestyle pilots. The Scélérate is a freestyle wing and the Mécréante a full-on acro wing. There’s also the little Geronimo for speed flying and ground-handling. And now, the Gummfluh.

“We want to keep our originality and authenticity, so we design our wings with our own ideas and preferences”, David says. “Safety, reliability and handling are key factors, and we focus on quality of the materials and flying properties.”

Flyfat is managed by David and Lucas. Ludovic Dujay, who was part of Fat Acro Team at the beginning, is now their French importer, and French pilots François Masingue and Florian Renault are test pilots. Flyfat also benefits from the expertise and feedback of French paragliding legend Sébastien Bourquin.

Cross Country’s news editor, Charlie lives in the south of France where she likes to pursue her twin passions of flying and long-distance running. She flew the Flyfat Gumfluh XS at an all-up weight of 68kg with the Advance Success 4 harness.