Flying the flag for Australia, Allen Weynberg goes on tow-safari with this new EN-B

I am the most patriotic pilot in the country. Unfolding a brand new Cosmos from Flow, the Australian paragliding manufacturer, on Australia Day at Beechmont, Queensland, Australia (arguably the best but certainly the most interesting foot-launch in the country). A quick decision after the previous weekend’s lacklustre flying had led to the order being placed and the glider being delivered, in just three days, from the manufacturing facility in Thailand. 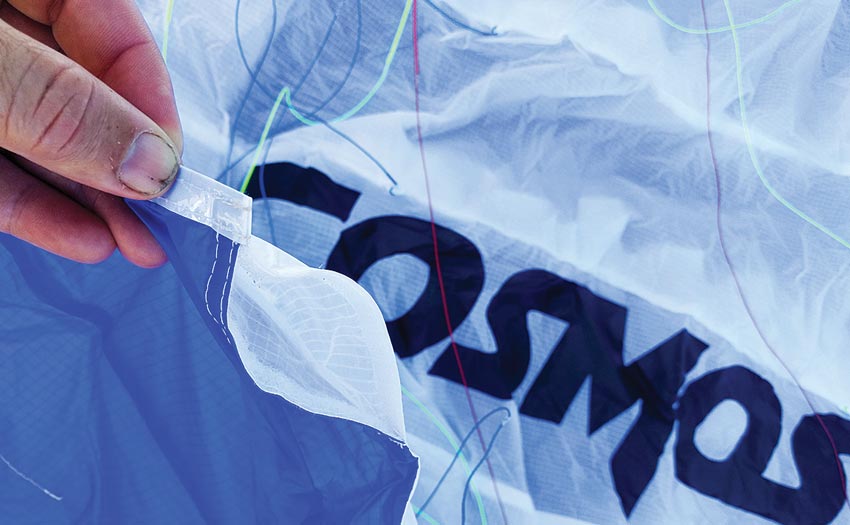 Australia Day lived up to the excellent weather forecast. I unwrapped the new wing in bright sunshine on the pristine turf at the Beechmont launch. The plastic rods all stood to attention in line with even the last few reinforced closed cells. Risers were uncomplicated and the lines held in place on the maillons with rubber 0-rings.

Brake handles had a natty Flow logo on and were attached to the brake lines via a swivel. A further neat touch is the addition of a small plastic tube around each brake line where it goes through the metal swivel – presumably to prevent abrasion.

The brake handles clip to the risers via a popper. This popper is placed above the little tab that the pulley is on and looked to me to be a bit unusual. I asked Flow designer Felipe Rezende what this was all about and he said, just occasionally, they like to put something different into their designs. I was sceptical at first but after over a dozen flights the brake handles have had exactly the same amount of tangle-ability as every other glider I’ve owned. 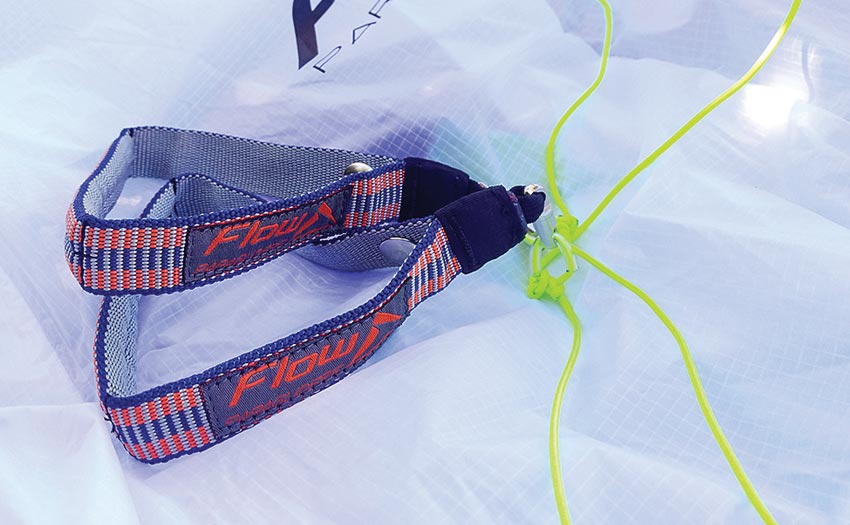 After a brief couple of inflations, I took off into lifty conditions. I was at base in less than ten minutes and enjoyed the climb out and initial feel of the new wing. The brake handles were set very long and I needed an extra wrap on that first flight to feel in tune (I normally fly with a half-wrap when thermalling).

I made a mental note and took them in by about 4cm before my second flight. The 4cm seemed about right and enabled full pulley-to-pulley speedbar whilst still retaining a bow in the brake lines and no deformation of the sail.

The first flight took me west from Beechmont over the lush green ridges and across the wide Kerry valley. Base was only 1,500m at best but the Cosmos climbed well in each thermal and had a solid secure feel leaving plenty of brain energy left to enjoy the view.

Flow say the glider is for the confident pilot straight out of school or the more experienced pilot that flies in the B category who will be enticed by sweet handling and “outstanding” performance. As I landed in the next field to Bluey on his Ozone Swift 4 I definitely put myself in the second category. 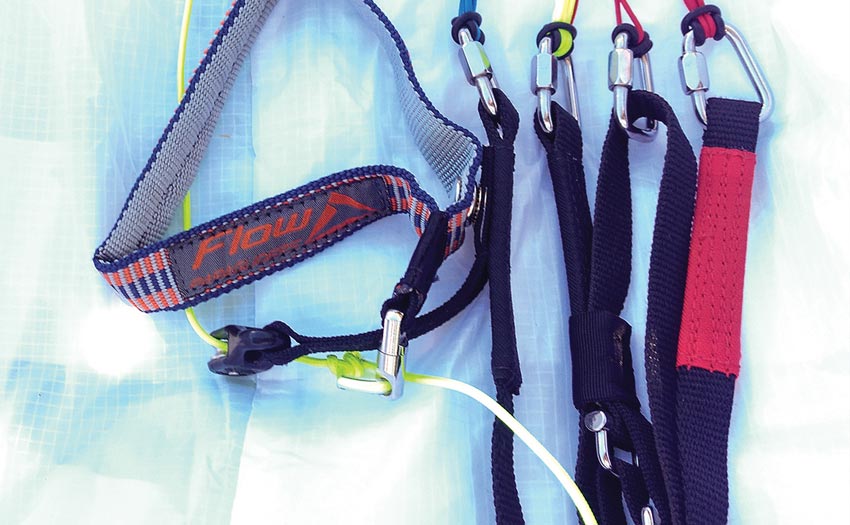 The following weekend saw me flying at the other main Canungra launch – Tamborine. It faces west, works a little later and is notorious for catching pilots out and forcing them to land short of the official landing field in trees, gardens or on roads.

Lighter winds on launch should have given me a clue but the Cosmos came up overhead easily and I lobbed off to soar gently over the jungle. Soon I headed out towards landing, anxious not to cut it too fine. A hands-up glide had placed me 100 or so metres above the landing when a little beep and surge told me it wasn’t over yet.

With the security of the landing field below I was really able to sniff out the best bits of the climb and crank the Cosmos around tightly to take advantage. It felt great and I was more than pleased to ride the thermal all the way up to base.

It was an unusual day with all the best lift low down and trickier, windier stuff up high. After trying to get away with no luck I turned around and headed for landing but couldn’t resist climbing out from down low again.

A couple of weeks later saw me entered in the “friendly” club competition. Conditions were weak and a task to fly down from Tamborine as slowly as possible was set, meaning each minute spent in the air gave you a score of one kilometre.

It turned on just enough to see me and the Cosmos wheeling around in circles amongst twelve other pilots, hanging on to zeroes and watching like a hawk for any sign of better lift.

I was flying my size S (70 – 95kg) at just under 90 all up, managed sixth place and was sandwiched between two Zenos in fifth and seventh. 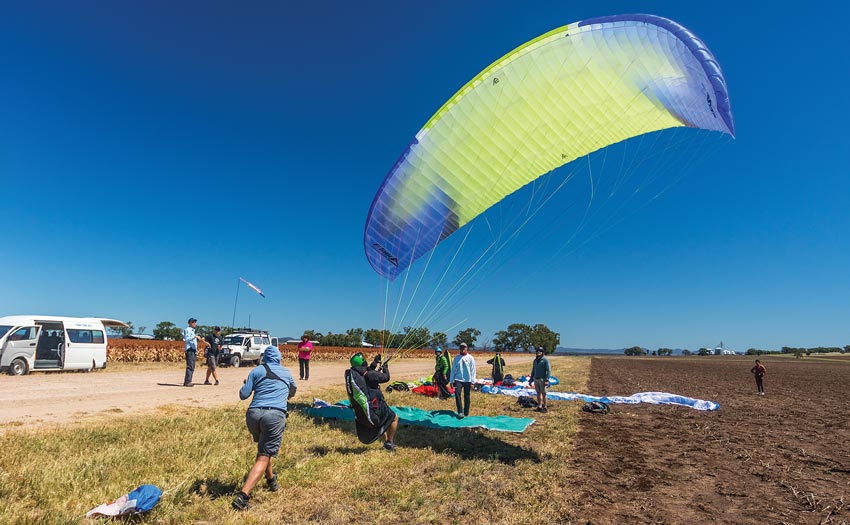 Allen getting ready to launch during a week-long tow safari in New South Wales, Australia. The concept is the whole group travels to wherever conditions are best. Photo: Sky Out Paragliding / skyoutparagliding.com

A ruler-straight gravel road bakes in the heat. Debris from an adjacent cornfield scuds by at an alarming rate, twisting and mixing with the red dust, before ripping away and upwards. The first flying day of the XC Tow Course with Skyout Paragliding and I’m first punter up.

There’s always tension before a tow. Extra things to attach, more people watching and a slight loss of autonomy. Everything is ready and the windsock goes limp. Thermal block?

“What sort of launch?” Jocky asks in a brusque, matter of fact, voice.

It doesn’t matter that it’s been howling it’s still here and now.

The line tension builds and I step forward. The Cosmos comes up easily and solid and I’m off and away. Test passed. On tow I could really feel how pitch stable the wing is as it just stayed above my head with minimal inputs.

I released into a good thermal and climbed out, drifting quickly downwind across the Breeza Plains near Gunnedah in New South Wales. When it felt like I’d reached the inversion I turned downwind and into surprisingly smooth air. As the sink alarm built, I pushed speedbar until the pulleys met and covered as much ground as possible hoping to find another climb. The Cosmos behaved well on bar as you would expect for a glider in its class.

The final day of the trip dawned under another clear blue sky. Best forecast of the week so far. Still blue, challenging low down and never really high (1,900m max). By now I was really getting the feel for the wing. Many of the thermals low down were small and broken requiring tight turns in the good bits to maximise the lift. 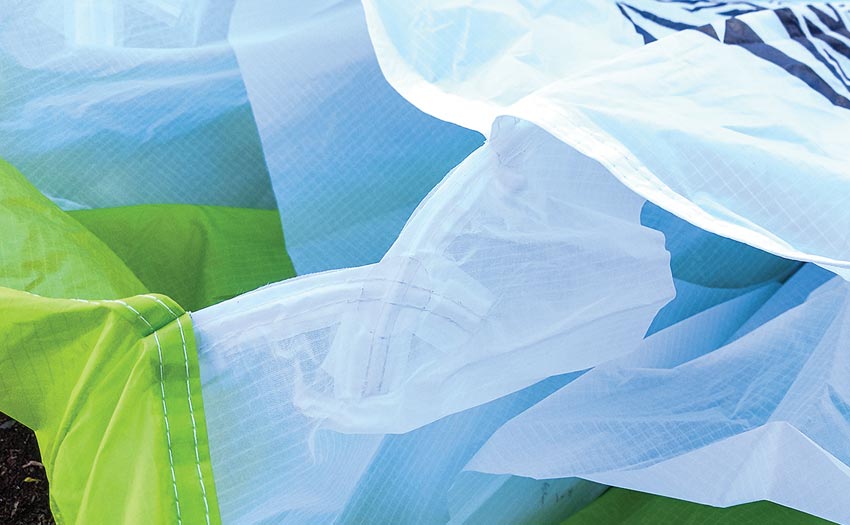 I flew all my Cosmos hours in an Ozone Ozium 2 harness. I love the snug feel. To get the most from the Cosmos in tighter climbs I needed to weightshift hard and push the wing around. Longish brake travel also meant firm smooth brake movements felt best.

The first gaggle of three that I flew with contained a Sigma 10 and a Mentor 3 Light. We all bobbed along easily together fanning out to search and then climbing collectively. I got ahead by aiming for a trigger I’d used the day before and climbing easily away on strong lift. Once I felt the leading edge begin to go on one side but a quick dab on the brake and hands-up and it flew on just fine.

A glide or two alone saw me catch up with Ken on his Gin Carrera who was scratching low. We circled around together in weak stuff as it rolled along the flatlands before hitting a release point.

I wondered how my lower-B Cosmos would go against Ken’s wing, a B+. The Carrera did find the thermal first and I started to turn because Ken did but when we were established we drifted along together just fine.

When the thermal steepened and got stronger I was able to use my greater experience and the Cosmos to turn inside, track better and climb away. Ken landed with a PB of 55k and I pushed on to 69k in just over three hours to win the day. In fact, the Cosmos and I posted the longest flight of the course not done by a professional guide. Job done.

Allen Weynberg learnt to fly in 1994 and lives in Brisbane, Australia. He regularly flies EN-B wings, around 70 hours XC a year. He flew the Cosmos for 13 hours XC, footlaunch and tow, at 90kg all-up with an Ozone Ozium 2 harness.