The innovative Apco Hybrid has been supersized to a tandem. Marcus and Charlie King tried it out.

There are not many lightweight tandems out there, and this one is unique and worth a look if you are in the market for such a wing. It doesn’t go for the super-lightweight option, instead aiming for usability and durability. Good for hike-and-fly, travel and also paramotoring.

Two years ago in XC193 we reviewed the new Apco Hybrid solo wing, an “innovative wing that brings something new to our sport.” It brought together single- and double-skin technologies to give the best of both worlds in a single lightweight wing. It was a genuine innovation.

Late last year Apco announced a tandem version of the glider weighing in at just over 4kg – perfect for tandem hike-and-fly. The tandem hike-and-fly market isn’t so packed, but there are more products looking to fill this niche. So how does the Hybrid Tandem compare with what’s out there already?

On the one hand are the single-skin tandems, of which there are just two: the Niviuk Bi Skin 2 P and the Skyman Sir Edmund Tandem. These weigh in at 3.3kg and 2.61kg respectively, making them the obvious choice if weight is important.

In the other camp are the lightweight double-skin tandems such as the Advance Pi Bi, Gin Yeti Tandem 3 and Ozone Wisp. These weigh from 4.35kg to 5.4kg, although the latter is for the larger 41m² Yeti Tandem.

The Apco Hybrid Tandem comes in at 4.27kg for a wing with a flat area of 35m², making it a little smaller than the double-surface wings. It’s worth noting that while the double-skin tandems are all made out of the lightest materials currently available, the Apco Hybrid Tandem uses a mix of cloth with harder-wearing Porcher Skytex 32 on the front of the top surface, theoretically making it more robust. 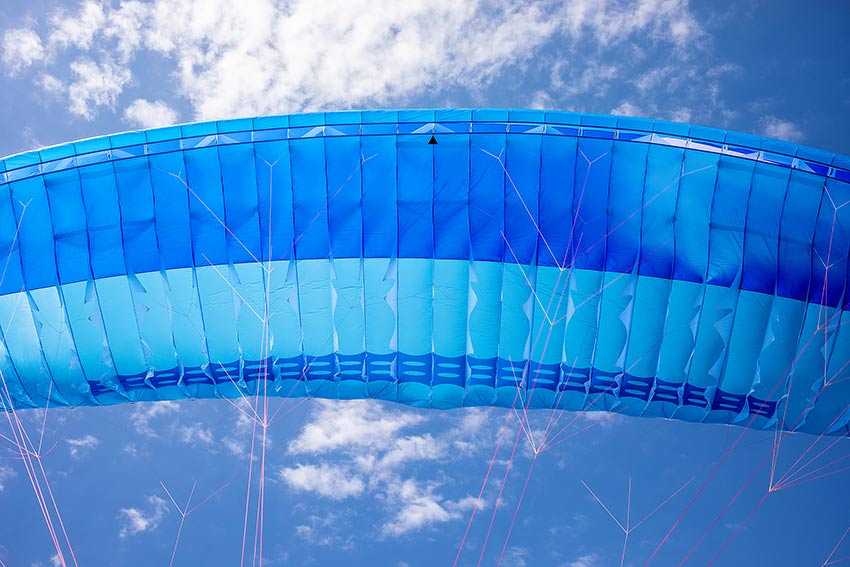 The wing has an interesting line layout – lines on the single-skin part are connected and meet in the middle, providing span-wise stability. In a double-skin wing the internal diagonals do this job

Construction-wise nothing obvious has changed from the single version – it’s simply been supersized. The tandem has the same number of cells as the solo wing (48) and the cell openings have a sharknose.

As well as the nylon rods on the leading edge there are rods going along the chord over the C connections. Despite these you can still pack it down quite small – I was able to fit it into a reversible Sky Crux hike-and-fly harness. There is also tape running across the span near the C-tabs. 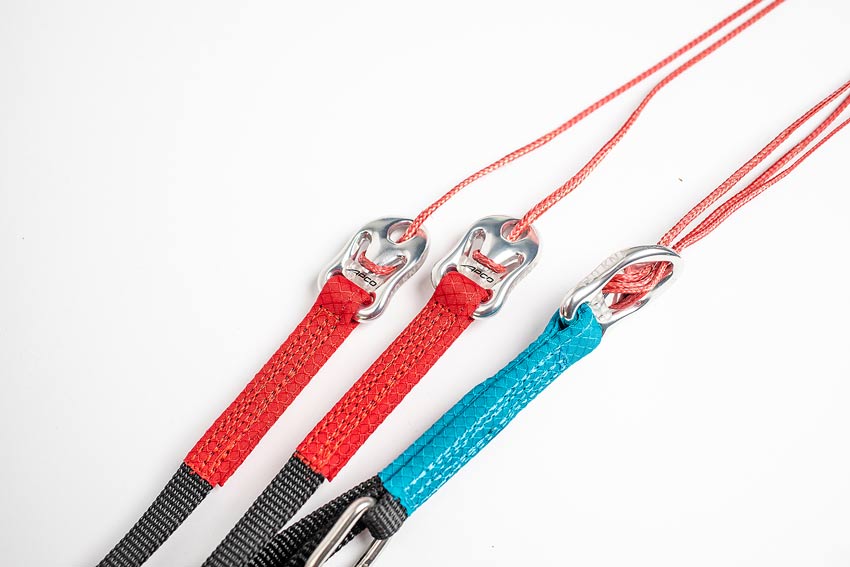 Apco’s V-links instead of maillons. These are made of one piece of metal and have no moving parts

The line-set uses unsheathed lines, although there is a paramotor version with sheathed lower lines, which would obviously be more user-friendly. This user-friendliness goes for the risers too, which are made of webbing and not super-light bootlace-style. Brake handles are fully padded with magnetic keepers. The glider has trimmers, which can be replaced if they wear out as they are not sewn in, and a magnet in the red loop handle so they can be stowed when in the slow position.

The glider comes with Apco’s own intriguing metal V-links instead of maillons. Made from one solid piece of  aircraft-grade aluminium there is nothing to forget to screw up or work loose. 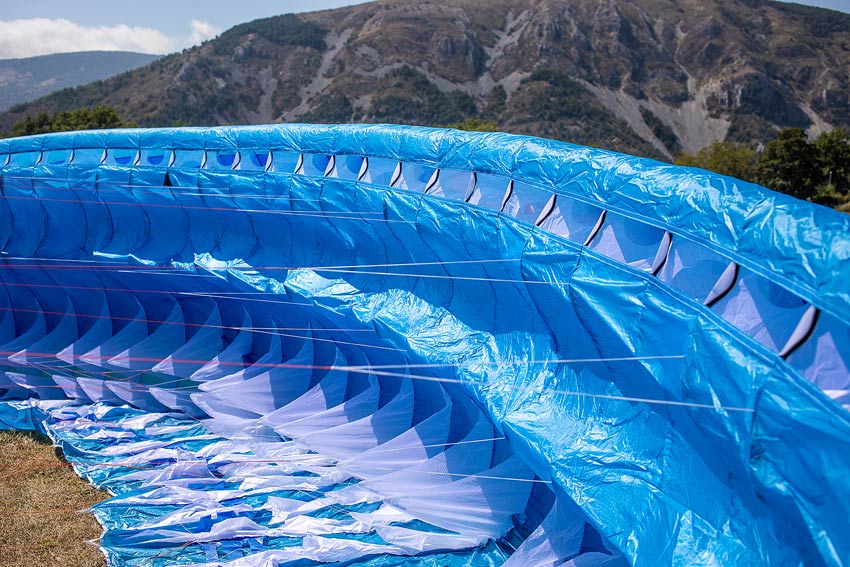 The double/single-skin construction. The leading edge has a sharknose, while the long tabs on the single-surface section contribute a lot to stability in roll

The most important aspects for a tandem are probably its take-off and landing behaviours. The Hybrid works very well for both. On take-off the wing comes up easily in nil- and low-winds. However, when it gets stronger there is enough structure in the glider to make it easy to control.

The wing comes up straight and needs no real correction as it comes overhead. The tabs of the single-surface section help keep it on the straight and narrow. When you then start running the wing produces lift quickly, which is great if you are launching from difficult terrain or tandem paramotoring.

It’s the same for landing. The wing can fly pretty slowly and the flare is very effective. Obviously keeping your speed up on final approach helps, but with the Hybrid the timing of the flare isn’t super critical. Your passengers will love this behaviour. 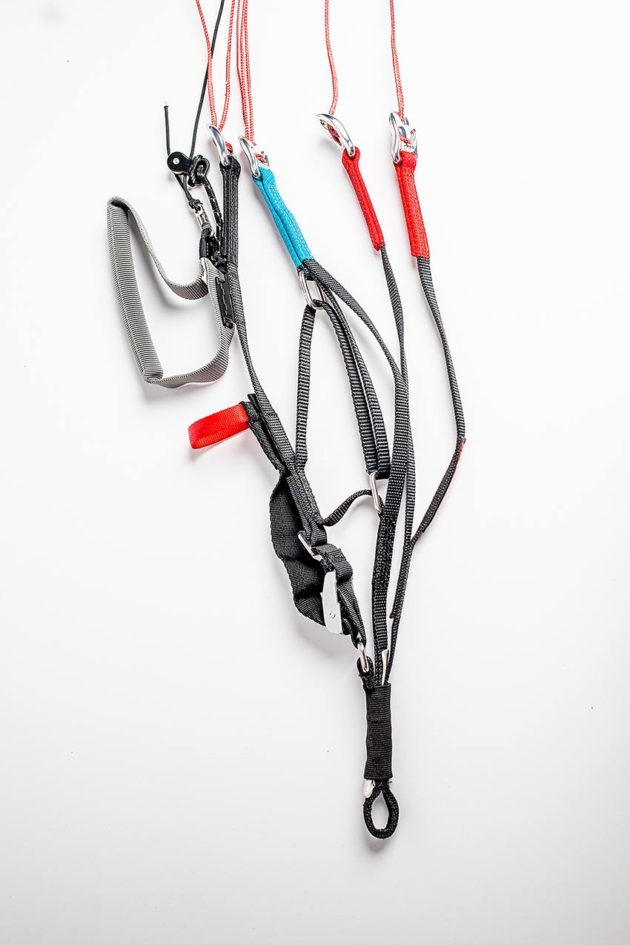 Risers are made of webbing, not bootlace. This is typical of the glider overall – Apco have gone for light constuction, not super-light materials. Brake handles have magnetic keepers

We took the wing on quite a few hike-and-fly outings to our local hill: from early morning sled-rides from the top of the mountain to catching the last of the lift on an evening flight after work.

Like the single-seat version the Hybrid Tandem behaves very well in the air. It is pretty stable in both pitch and roll, giving the passengers a smooth ride. Brake pressure is reasonably light but ramps up as you go deep. I found the wing easy to soar with other wings on our local site with the handling being nice and responsive without being too dynamic.

Flying at an all-up weight of around 150kg (the certified range goes from 110-190kg) I found the sink rate to be on a par with most of the wings around. 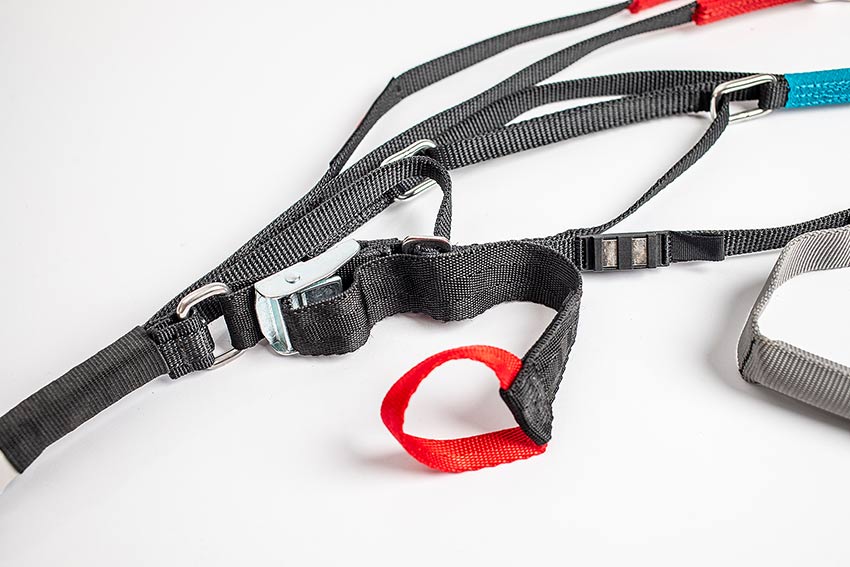 The trimmers adds about 10km/h. The glider retains its EN B certification when they are in use

The wing thermals nicely. On entering it doesn’t pitch particularly. It is easy to set the wing at a bank angle and it needs very little correction once circling.

We took off late one evening and flew to where there is a normally a thermal. As it was late it was broken but I was able to set up a pattern in it with the Hybrid that kept us in the lift. The wing coped with moving in and out of the best lift well, and stayed efficient as we slowly climbed to the top of the mountain to enjoy the views in the late sun. The climb rate seems good and we were able to out-climb some solo wings. Sharing experiences like that is what this type of wing is all about.

On glide the Hybrid is not the fastest wing around but it goes pretty well. It seems to cut through the air well so you don’t get knocked around. The trimmers give around another 10km/h of speed and the glider retains its EN-B certification at speed.

Performance may not quite be on a par with some of the heavier larger cell-count tandems but for many pilots this wing’s qualities in other areas will outweigh a point or so of glide in real use.

If you want to get dynamic the wing can be made to get up on a wingtip or spiral, but the pitch and roll stability shows, so as soon as you stop the inputs it will return to normal flight. This is the same behaviour as the solo wing and is because the tabs are exposed to the airflow, reducing sideways movement. Don’t worry, it’s not boring: with good timing you can get above the wing enough to get your passenger’s heart-rate up. 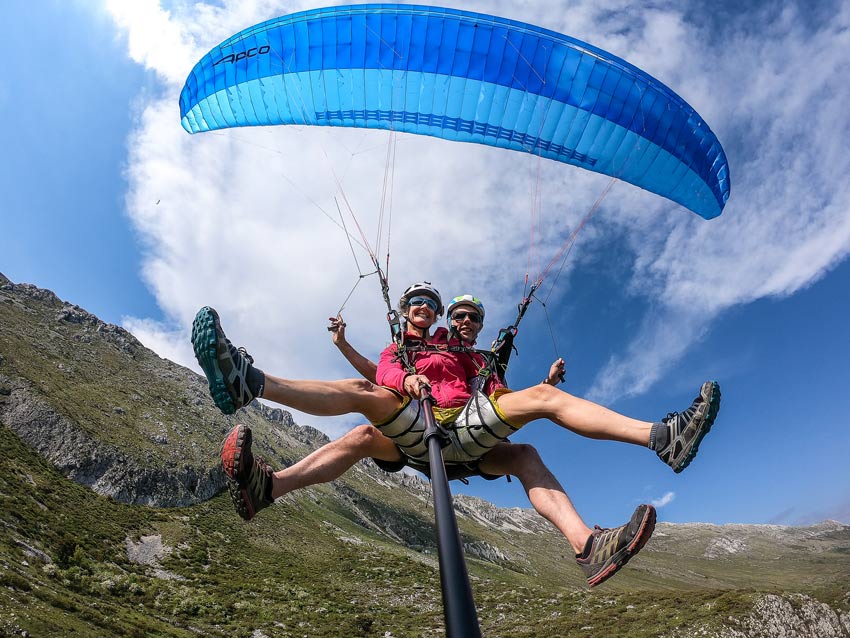 The glider is easy to launch and land, which is where a tandem really needs to shine

With the strong take-off and landing characteristics of the original Hybrid, the tandem version seems like an obvious development. It certainly shines in those important areas.

What is surprising is how little extra weight has been added compared with the solo glider, so you get a full tandem for only a kilo more. It makes for a great choice for sharing hike-and-fly adventures and comes with the reassurance of EN-B certification and more durable materials. It’s also easy to fly. In short, it’s definitely a wing to consider if you are looking for a hike-and-fly or travel tandem, or if you just don’t want to carry the extra weight of a full tandem.