An accessible, lightweight EN B with feel and handling is the holy grail for many. Charlie King goes looking

AirDesign say they are mindful that the concept of hike-and-fly is a huge motivation to learn paragliding, and that it’s now the fastest evolving sub-genre of the sport. They have a dedicated Lightweight section on their website, and make lightweight, hike-and-fly friendly wings in every wing-certification category.

Their standard EN-A, EN-B and EN-C wings all have Superlight (SL) versions, and AirDesign have recently released the high-performance EN-D vol-bivouac wing, the Hero, which was designed from scratch and is a cousin to the EN-D Pure 3.

The Vita 2 SL is the light version of their low-EN-B wing, the Vita 2. It is suitable for pilots fresh out of paragliding school, and when it was first released, designer Stephan Stiegler was quoted as saying it was the best wing he had ever designed thus far – very safe and comfortable with great handling.

The Superlight version is an impressive 1.4-2.0kg lighter than the full-fat wing, depending on wing size, starting from just 3.1kg in the smallest size. This means it benefits from all those good things such as easier launching and gentler reactions to collapses, as well as the obvious advantages of having less to carry up the hill in the first place, although of course you have to be more careful with it as it is made of lighter materials.

Out the box
I was very excited to try the Vita 2 SL, as it appealed to me both as a hike-and-fly wing and a thermalling glider. When I had a look at the weight ranges I was very impressed to see that AirDesign cater really well for lightweight pilots: their smallest wings start from 50kg in the A and B category, and 60kg for the EN-C Volt 2 (standard and SL). The smallest Vita 2 has an extended weight range, which is for 50-65-75kg, but I went for the next size up where I would be around the middle of the weight range.

The wing came in a suitably small parcel, all wrapped up in AirDesign’s AirPack Light inner bag, which has a zipper and compression straps so you can really squish it down if you need to pack small. It’s made from double-coated Porcher Skytex 27 on both upper and lower surfaces, which comes in white, with Dokdo 30 for the coloured areas, mainly the leading edge. I sometimes think it’s a shame that lightweight wings have to be white, because they don’t stay that way for long, but brand-new, the white with green and red/yellow looks great.

The lines are all UV-coated unsheathed aramid, with the lower lines coloured. They can be a bit tangly, especially compared to sheathed lines, but that’s a small trade-off for the easy walk-up! There are split-A risers for easy big-ears, Bs and Cs, with the inner C-lines split to form short D-lines. The risers are made from 12mm webbing with colour coding, and the brake handles attach to the risers with traditional poppers. It all feels nice and robust and easy to handle.

The webbing attachment for the brake-line pulleys is extra long, which is to allow for AirDesign’s ‘Brake-Shifting’: if you pull the brake in towards your body when turning, you will get a steeper bank angle and a tighter, faster turn than just pulling the brakes straight down. AirDesign say this reduces the tendency of the wing to dive and gives you the most efficient turn. If you shift your hand to the outside it gives you a flatter, more efficient circle for maximising light lift. I tried it, and it works! 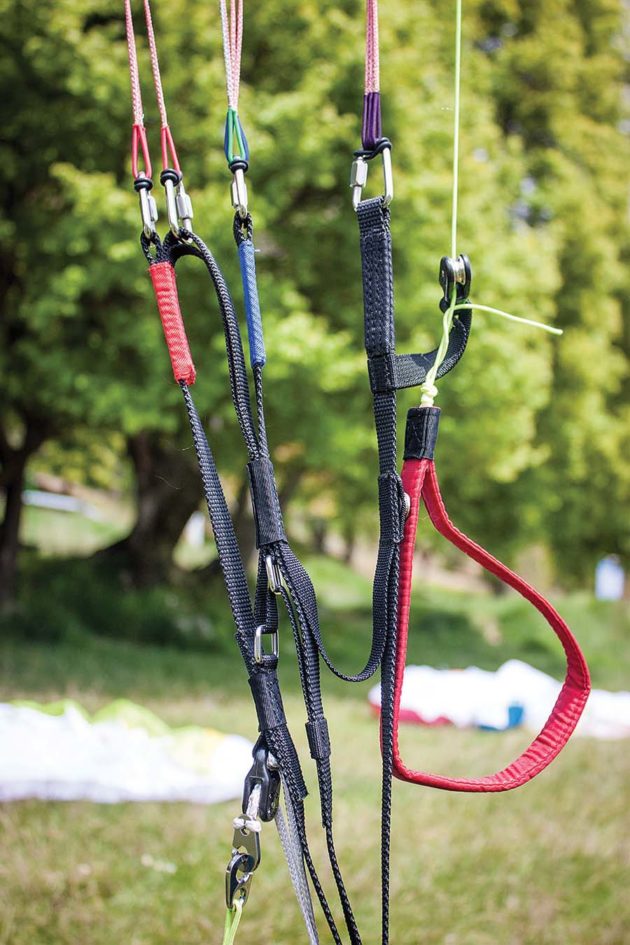 Technology
There’s a lot of technology squeezed into this wing. It has a sharknose, the leading edge being supported and kept in shape by soft Polyamide rods. The three little holes on each wingtip are the Vortex holes. AirDesign say the air that escapes through them breaks up the wingtip vortices, so improving performance. They also help with wing-packing by letting the air escape. The Vita 2 SL also has what AirDesign call a clean Razor Edge at the trailing edge, which aids performance by reducing ballooning. Designer Stephan Stiegler says, “We tested it on some models and found that it benefits performance by up to half a glide angle”.

On easy fly-downs following early-morning stomps up the hill, just about any glider is pleasant to ride back down on. As long as it’s light and easy to carry and easy to launch, there aren’t many more boxes to be ticked. The Vita 2 SL is very easy to forward-launch, even in nil wind, but my expectations of a lightweight sail on a modern wing are now very high, and I would have been very disappointed if this wasn’t the case; still morning conditions are gorgeous, but it’s in the snotty, feisty and a bit windy air that you get to see what a glider is actually like, and we’ve had quite a few of these kinds of days too. And that, for me, is where this glider really shows its strengths.

It shows its strengths despite me demonstrating my many weaknesses – like trying to snatch it overhead as quickly as possible to get it launched if it’s a bit on the windy side. I know not to do this, but I still do it, especially on a first flight on an ‘unknown’ wing. Those early-nineties draggings through Welsh cowpats at the mercy of a super-charged paraglider with the wind in its sail have made strong memories that I have yet to completely forget.

I do know gliders don’t do this any more. The Vita 2 SL is no exception. If you treat it like that, it will overfly, front collapse and then … well then if you just stand there with some pressure on the risers, it will sort itself out and wait for you to chill out and then launch when you’re ready. It’s the Zen Master. And if you just chill in the first place, pull gently and evenly it will launch itself in a manner that makes you look almost graceful, despite the wind. Really. 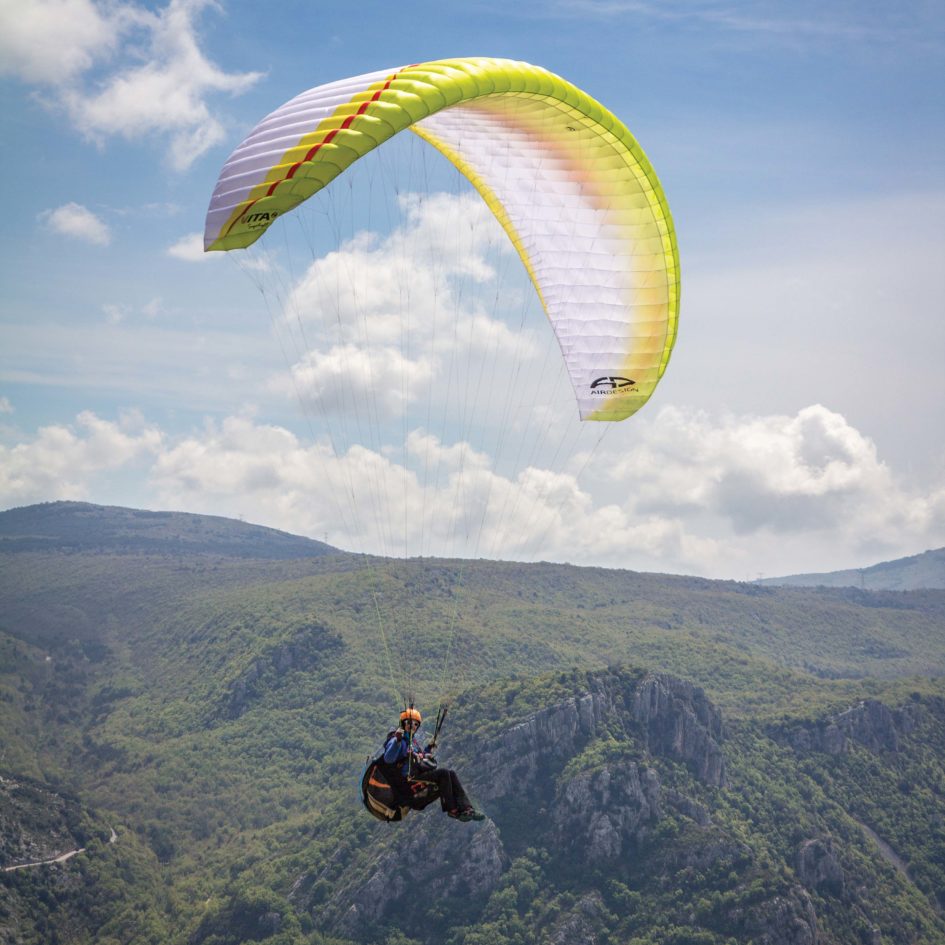 In the air
In the air it feels very ‘right’. I found the brakes to be a good pressure – fairly light (those Vortex holes apparently reduce what would be heavier brake pressure) but firm and definite with plenty of feedback. I did find the brake handles made my hands ache a bit in thermals – the handles are quite narrow, and actually the loops themselves are quite big, especially with thin gloves on, but that’s a minor complaint and it keeps the weight down; you could always change them for more substantial ones, with a bit of a weight penalty, if you wanted.

There’s plenty of feedback through the brakes to help you feel and centre the thermals, and the wing pitches surprisingly little. As I rode a windy thermal up a snotty gully I thought how much I really enjoy feeling looked-after by the glider – because that’s how this wing made me feel. I felt safe, and better able to think and enjoy the flight. I don’t want to fly a dead-feeling wing, and I don’t like that bus-type feel either, but this wing feels agile and responsive while looking after me.

As someone whose cross-country thought processes are dominated by the “will it be safe to go there?” rather than “will it work over there?” I have realised I personally enjoy flying a low-B, safe in the knowledge that the limiting factor for distance potential is still the thing in the harness, and not the wing. People are doing fantastic flights on this class of wing.

The Vita 2 SL climbs as well as anything else and glides well. The speed bar is easy to push and doesn’t kill your legs on a glide, and there’s a noticeable increase in speed when you do so. For me, it’s the perfect wing: great feeling, fun to fly but safe. And I can use the same wing with a minimal harness for hike-and-fly. For my personal flying wishes, this wing ticks all of the boxes.