Designed for pilots who want to explore the mountains on foot without being weighed down. Photo: Brian Steele
Hike and Fly, Reviews

At less than 3kg this single-skin wing joins a niche group of ultralight tandems. Marcus King tries it out

Your first decision when looking for a lightweight tandem is: double- or single-skin? Single-skins are far lighter, so if every gram counts then they are the obvious choice. But this is a very niche market – until now there have been just two choices: the Niviuk Bi Skin 2 P (3.3kg, reviewed in XC177) and the Skyman Sir Edmund Tandem (2.61kg, XC190).

Now AirDesign have released the UFO-Bi (2.83kg). Designer Stephan Stiegler explained it was a wing he wanted to make for his own adventures. “It’s something I personally wanted to do so I created a wing to do it.” He added, “In the case of the UFO-Bi we focused on how to handle such a big wing, making take-off and landing simple and safe.” 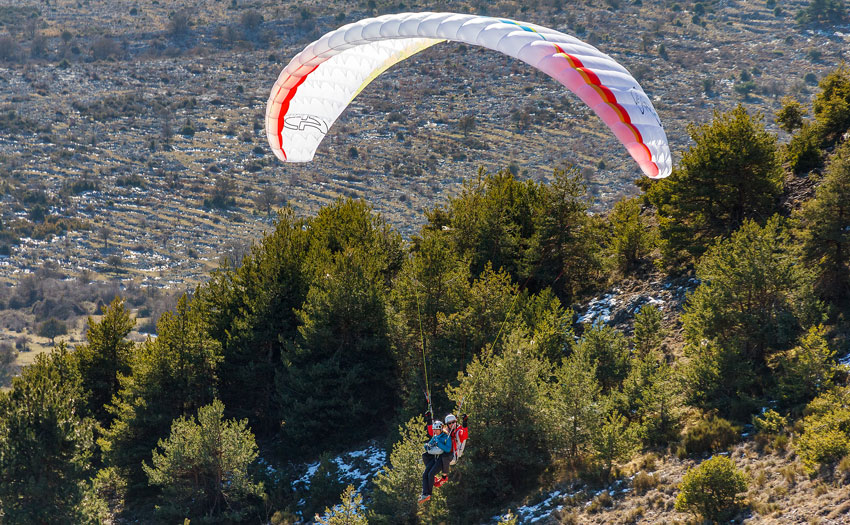 This tandem glider is a single-skin that weighs just 2.83k. Photo: Charlie King

My friend was gobsmacked when I handed her a daysack to carry. “Is this it?” she exclaimed. I was using Neo’s reserve backpack and the wing and two string harnesses fitted easily into a separate small daysack. This really is a very compact tandem when packed. At just 2.83kg it won’t weigh you down either.

With stable conditions and very light packs we decided to extend the hike to the summit of our local mountain, scrambling up and along a broad rocky spur to the crest.

Reaching take-off on a grassy col, I unrolled the wing. It really looks like a scaled-up version of the single-skin UFO reviewed in XC220. Stephan explained that the core of the glider is scaled, yes, “but the trimming has a completely different set-up as the practical demands are a little different from the solo version. For example, we focused a lot on the landing and also the load : surface area ratio is quite different from the solo, which also had to be considered.” 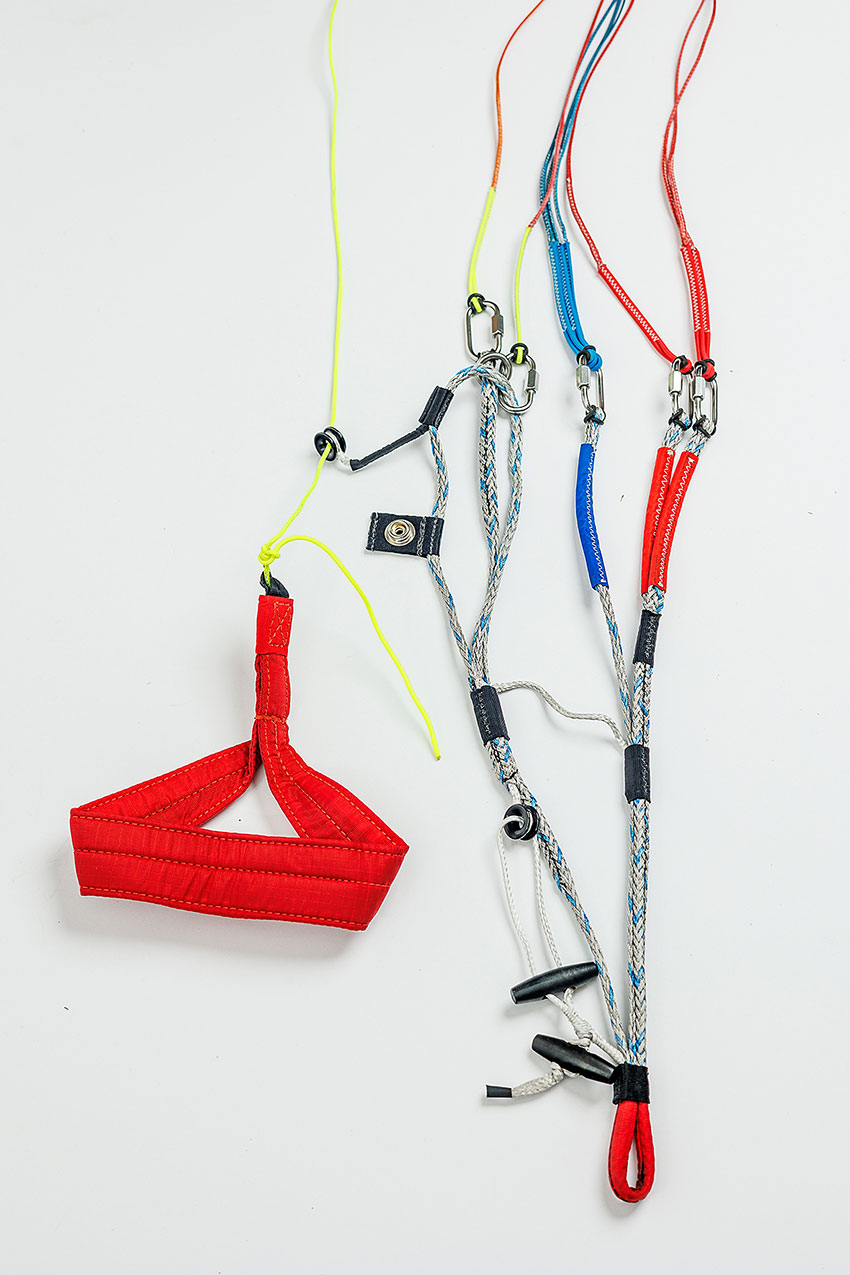 The most obvious feature of the wing is a tube across the leading edge with cell openings shaped with nitinol. This self-inflates like a double-surface wing, giving structure to the span.

Aspect ratio is lower than its competitors at just under five, a sign that ease of use has been prioritised. There are also nitinol rods sewn into some of the seams going across most of the chord to spread the load. This wonder material stands up well to abuse and you can pack it tightly.

The wing has a relatively narrow weight range of 130-190kg. This is where the double-surface wings offer more flexibility. The small Gin Yeti Tandem 3, for example, starts at just 90kg going up to the same 190kg, although it does weigh nearly twice as much.

The UFO-Bi is made completely from double-coated Porcher 27g/m2 cloth. As with all single-skinners there are quite a lot of lines. The tabs are nicely finished off with the edges folded and sewn. Like the solo version the line-set is unsheathed, so care must be taken to ensure the lines are clear of tangles before launch. They are coloured, making it easier to know what is what.

The Dyneema riser-set is also similar to the solo version, complete with the ball on the brakes that pulls down the whole rear-riser when you flare deeply. The only modifications for the tandem are the use of metal maillons and a trimmer system. A line that passes through a ceramic ring is spliced through the Dyneema that keeps it in position under load. Two small plastic toggles are used to pull it on and off. AirDesign say the glider should be trimmed slow for take-off and flying and released before landing to aid the flare. 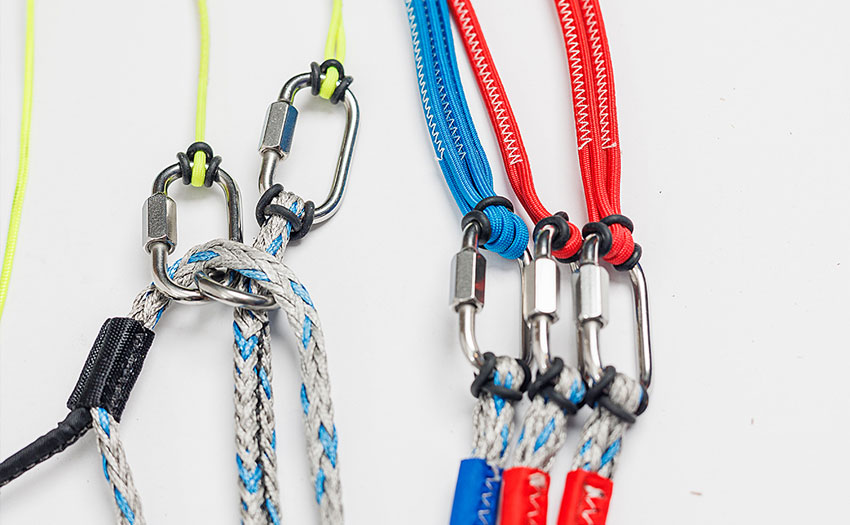 The glider uses maillons rather than softlinks

Clipped in, we waited for a cycle then I pulled up the wing. It rose more slowly than I expected, but it came up steadily without fuss to sit above us. A few steps and we were off easily. Over the following flights I forward launched and reversed it in stronger winds, and in all circumstances the wing launched steadily and easily and needed little brake input. I tried launching with the trims out just to see, and while the wing came up a tad faster and still showed no tendency to overshoot I did feel it took a little longer to lift off. 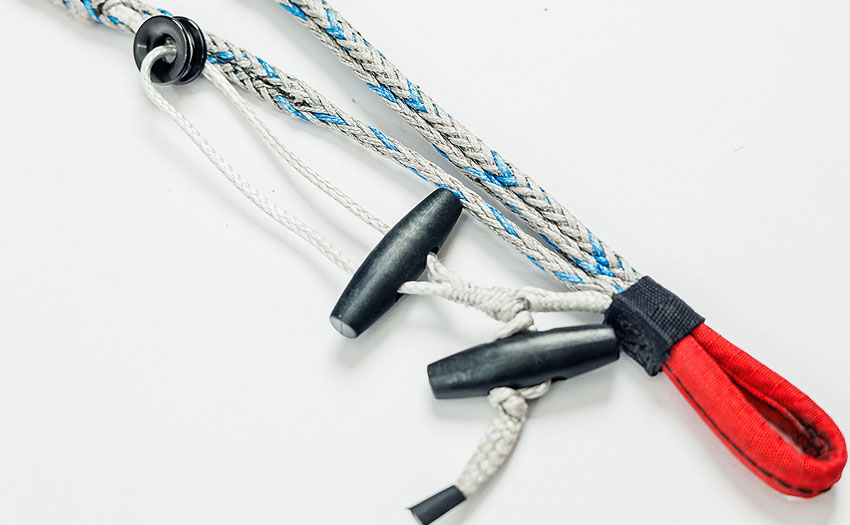 With its low aspect-ratio it is an easy wing to fly. The extra size, and of course weight hanging below it, makes it more damped than the solo version. It’s relaxing, with no small pitching movements as it flies through turbulence.

The brakes of course feel heavier than the solo, but they are not especially heavy and the wing reacts well. I found its agility combined with compact size meant I could make good use of bubbles of lift making S-turns, before 360ing as we moved away from the slope. With stable winter conditions I didn’t really get to thermal it properly, but then that is not its intended purpose.

In terms of performance I did find it slower than the solo double-surface wing we flew alongside on the way down, but only by a few km/h. Sink rate seemed comparable. I didn’t have any flights in particularly turbulent conditions but the wing remained comfortable and didn’t get knocked back by lift. Like the solo UFO it is confidence-inspiring with a comfortable ride that is easy to control.

In the past landing has been the Achilles’ heel of single-skins but the latest releases have improved massively and the UFO-Bi is no exception. Trimming out before the approach gives it energy to use on the flare. I was able to bring the wing to a complete stop even in nil-wind by timing the flare correctly. My passenger was certainly happy as we stepped lightly onto terra firma.

The UFO-Bi is only a matter of grams heavier than the lightest available and super compact when packed, but it does this without feeling extreme both in terms of construction and flight behaviour. If the weight really matters to you then this is a great choice. The calm, well-mannered launch and in-flight behaviour as well as easy landing will also be a bonus in the big mountains.