The Rise 3 is a high EN-B from AirDesign. The company is based in Absam, Austria, and former paragliding world champion Stephan Stiegler is the designer.

I had the test wing over winter, and I was not in any perfect testing locations like Colombia, Mexico or Australia, so this is more like a first-look than a 15-hour review.

My first launch in January was in the south of France on a short morning hike-and-fly. The first thing I noticed was how light the glider is. Unlike the Rise 2, which came in two versions, AirDesign have elected not to make a standard and light version – there is just this version.

It uses Dominico 20 on the top surface and Porcher Skytex 27 on the bottom. This is light material, and a sticker inside the leading edge warns you not to drag the wing around take-off. It needs to be treated with care and won’t like being dragged across rough launches. The risers are sleek and racy, most of the lines are unsheathed and the whole feel is of a wing optimised for weight.

The result is a nice light wing, compact too. The Rise 2 (L) weighed 5.9kg; the Superlight version was 4.6kg; the Rise 3 (L) is also 4.6kg. The new way, it seems, is light as standard, and indeed AirDesign confirm this is now their thinking. 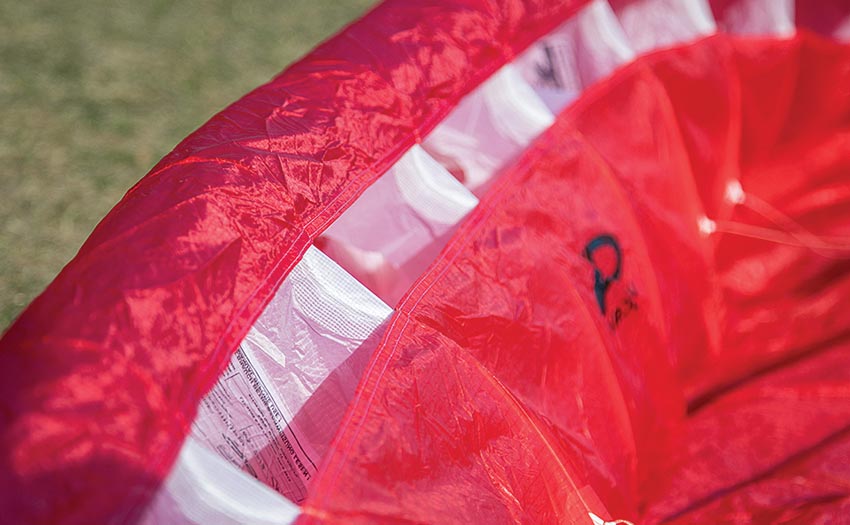 A sharknose, without an overload of plastic

The second obvious thing is it is longer and skinnier than the Rise 2. AirDesign say they didn’t take the Rise 2 as a template for designing the Rise 3. Instead they designed “down” from their EN-D Hero (“ultralight high-performance wing”). The aspect ratio is 5.95 (Rise and Rise 2 were both 5.7), which comes from the addition of winglets.

Winglets are back in vogue: the idea, say AirDesign, is they enlarge the projected aspect ratio, improve performance and “enhance directional stability”. Unlike Advance’s famous winglets, these are like little ear flaps, tipping up at either side of the wing. The silhouette is a little like a hipster’s moustache. They are there to manage the air-flow, and therefore drag, more efficiently around this part of the wing.

In a light wind the glider was easily organised, and came up straight first time with little input. It just found its way above my head and sat there, waiting for instructions. In the short, stable flight that followed I could make two observations: It’s nimbler, and faster, than its predecessor. Surprisingly so! This wing has character. I toyed around in the scrappy, not-really-working thermals before making an easy approach to landing. 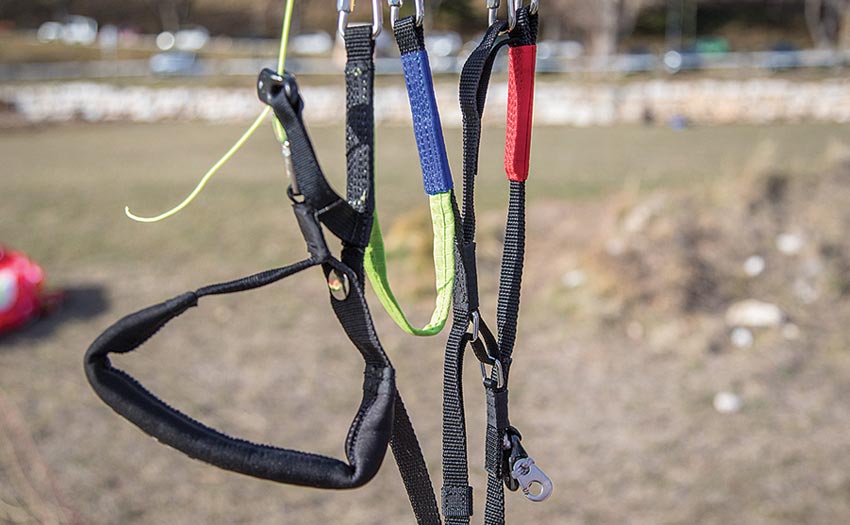 We say this all the time but EN B is a vast territory. This wing is deliberately placed at the top of the EN-B class, and is targeted at intermediate pilots as a minimum. That means it is not a second wing after school: it’s a wing for thermalling and flying XC. If you are looking at the Rise 3, you will be comparing it against gliders like the Gin Explorer, Nova Mentor Light series, Ozone Swift, etc.

The upper end of EN-B is a lifestyle choice for many pilots now; it’s not a staging post on a ladder progressing to ever more performance.

The market for these types of wings can therefore be very discerning: lots of pilots flying them have a lot of experience.

This wing will not disappoint those pilots. It’s well put together, with lots of up-to-date technology, and is bang on trend without being flashy or over-heavy on the plastic.

Run your eye down the EN report and it is mainly As, with Bs for the big asymmetric collapses on bar and the recovery from spiral dive. At first look there don’t seem to be any weak points. 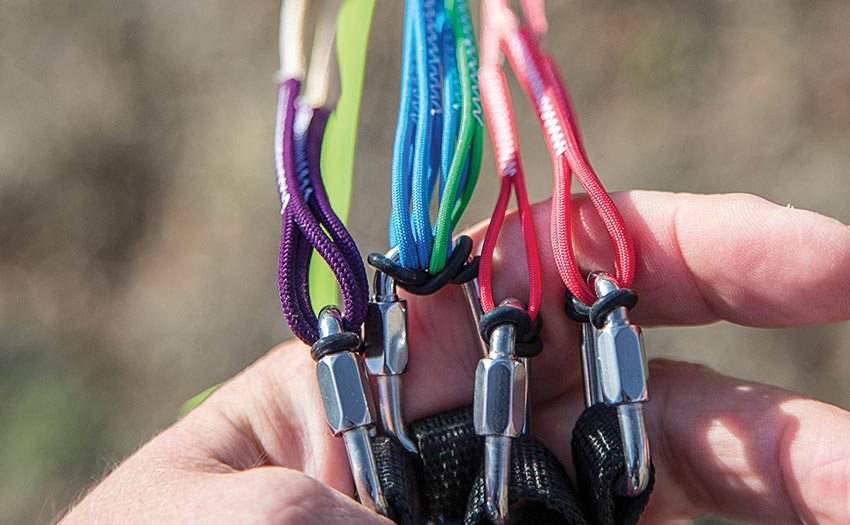 A cold February day with a wind from Siberia saw me huddled on the north Kent coast in England at 10am. The only other pilot had given up and gone for coffee, but I braved the muddy launch to give it a go. The site offers a 5km cliff run but needs a strong breeze to work well. At a steady 25km/h I had that.

Launching from a rosette with As and Cs in hand I readied myself for some leaping around action, but in fact the wing came up fine and stood like a rock in the stream above my head. A cravat saw me standing pumping it out three or four times, but everything was surprisingly under control. “Very collected launch behaviour”, I thought.

Two hours later I was quite smitten with the Rise 3. With a slight crosswind the cliffs collapsing into the North Sea offered bowls, ramps and mini-leesides. The feeling was a bit like a skatepark, climbing ramps of lift off one stack, before surfing the crest of a bowl or pushing out front to follow the high altitude seagulls’ line.

The turn on the wing in these conditions is immaculate and much nicer than the Rise 2. It’s linear, progressive, and can be dynamic depending on what you want to do. I found it easy to place the wing exactly where I wanted.

Pushing the bar had me laughing. The first half-bar gave an instant 10km/h; the second half took it to maximum, which on my GPS reading was +14km/h – that’s a lot for an EN-B. The result was I spent a lot of the flight scooting about happily on half bar, using the rear-riser handles to course correct.

Big ears were easy, comfortable and stable (an improvement on the Rise 2, which didn’t like big ears and rocked about). Trying some pitch exercises I found the wing just bounced back to stable position. It didn’t want to dive far forward.

Top-landing on the exact spot I wanted – again, so easy to place – I felt very engaged. The connection between brake-line and glider is instant; there is no time lag, roll or wobble as can be found in some EN-B wings. Experienced pilots will love that; newer pilots might want to take it a little easy at first. 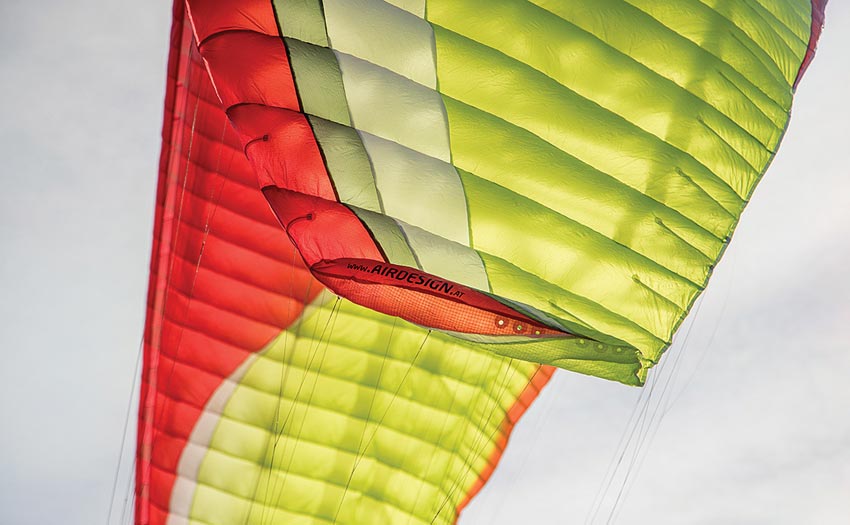 The wing-tip ear, with holes that let the air out to manage the airflow and reduce drag

At the Stubai Cup in Austria, I launched in snowy, cold, back-wind conditions. The forward launch was straightforward, again surprisingly so. A few steps forward, the glider came up cleanly and I ran off the hill. No drama.

Finally, after the UK’s “wettest March in 10 years” spring arrived in the south of England. The first thermals were tiny and light, not to mention crowded. I zoned in on a couple of Zenos and weightshifted round, pulling brake.

The turn really is much sweeter than the Rise 2 – it’s much nimbler. In their promotion of the wing AirDesign seem to make less of their brake-shifting technique for the Rise 3 (pull in towards you for a steeper turn, pull away for a flatter turn) although it still works. It just seems less important compared with the Rise 2, which is probably a good thing. (New tricks, old dogs etc).

Later, scraping the back of a tiny bowl like a kid with a spoon, I eked out every metre I could. You’ve got to be confident in a wing to fly like this, and the Rise 3 seemed to grant me that confidence quite easily.

My final flight on the test wing saw me again launching in a steady wind of 20km/h on thermic late-afternoon. By now I knew the wing launched well with As and Cs, and that there was loads of extra speed available on bar.

That meant I was happy to launch in a lull. Using the As and Cs and not touching the brakes the wing behaved beautifully, with again no hint of over-shooting or aggression. I was smoothly off and into a good climb straightaway.

Pushing out on bar, thermalling up strongly, drifting back, pushing out again – the feeling was of a glider handling a robust afternoon well. 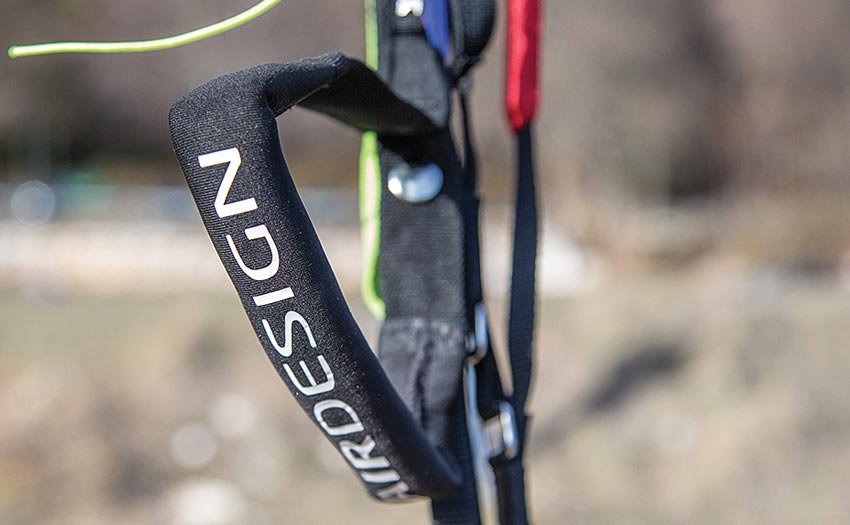 The Rise 3 is a good glider, with 100% usable performance. The turn is beautiful, pitch stability is reassuring, and the speed – well I was actually laughing when flying at full bar because of the acceleration.

In the top bracket of EN B, other strengths include excellent launch behaviour across the range, and its light construction for everyday use. I felt planted and established on the wing after very little flight-time, and that allowed me to expand where I felt I could fly: from scratching in light conditions to launching in strong wind.

To me, that is what matters. Does it inspire confidence? Will you be able to “forget about” the glider and just fly? Can you use all of its performance or are you forever backing off? Can you place it where you want? If yes, then you’re onto a winner, because confident pilots fly well.

Combine that with the fact that the wing is light, and you have a go-anywhere glider that will tick many boxes for lots of people. 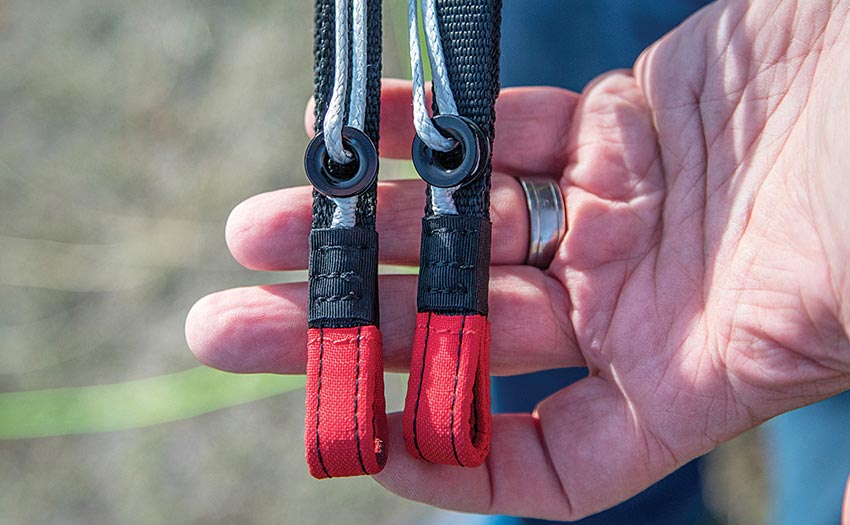 Risers with ceramic rings for the speed system

This review was published in Cross Country 190 (June 2018). To stay up to date and read our reviews first, subscribe to Cross Country