The Iota 2 is Advance’s high-end EN-B, and it sits between the lower EN-B Epsilon 8 and the EN-C Sigma 10. Once a lower EN-C, the Sigma is now more demanding, while the Epsilon remains a fun and playful EN-B.

The Iota 2 has picked up some of the improvements in profile and materials that evolved from the Sigma 10 development programme. The original Iota had a lot of fans – the new wing takes some of the dependability of that wing and improves upon the handling, turn co-ordination and overall performance. Pitch stability and slow speed performance is also improved thanks to a better profile, more balanced canopy tension and optimised cell-intakes.

I prefer EN-C wings, but I enjoyed flying the Epsilon 8 and managed to fly good XCs with it. So, coming to the Iota 2 I wanted to know whether it would offer much more than the Epsilon. Would it deserve its place in the range and have a distinct enough character to attract a different set of pilots?

I also wondered if Epsilon pilots with a high skill level would be better off progressing directly to the Sigma. With this in mind, I asked Advance to send me a Sigma 10 at the same time as the Iota 2. They obliged and it was really helpful to be able to fly both wings to answer my questions.

Advance’s website and manuals are some of the best I have seen in terms of honestly appraising the character and handling of their wings. The Iota 2 is pitched as a more demanding wing than the Epsilon 8, with great ease of use on the ground but with more feedback and more demanding active-flying and recovery characteristics. Pilots should already be comfortable with basic XC flight and looking to make longer flights.

The wing comes in five sizes, which offers more optimal placing in the range than the Iota 1. The range also covers a wider range of all-up weights, from 60kg to 128kg. The certified weight ranges overlap, however Advance specify ‘seamless’ weight ranges to help pilots pick the glider best suited to their weight. The size 25 I flew has a seamless weight band of 85-97kg; I flew at 92kg all-up. 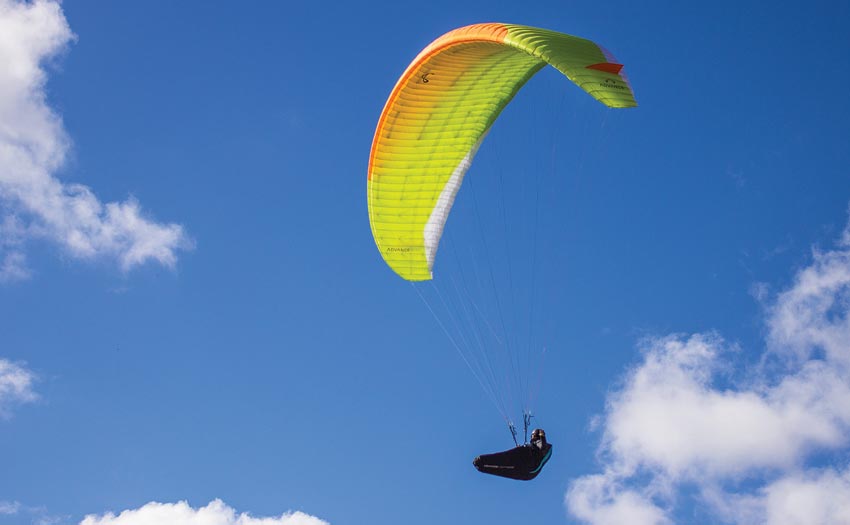 For handling, climbing and day-to-day XC the Iota 2 ticks all the boxes, and will allow pilots to fly to their potential every time they take off. Photo: Marcus King

Compared with the Epsilon 8, the wing makes more extensive use of lighter materials. However, nothing on the wing felt anything less than robust. As Lotus would say, “they have added lightness”.

Wires near the C-risers and mini-ribs towards the trailing edge help to produce a cleaner, more efficient and well-tensioned aerofoil. The inlets of the wing are fairly traditionally placed. There is a mild sharknose shape with fairly large oval inlets. Advance have worked on various prototypes to ensure the airflow at the cells is optimised. The result is better inflation and better slow-speed flying.

The three-line riser set comes with an adjustable speed-system and a speed indicator marking on the risers. There are also pitch-control handles (C-Handles) to help with active flying during accelerated flight. This used to be the kind of feature reserved for EN-C or above. 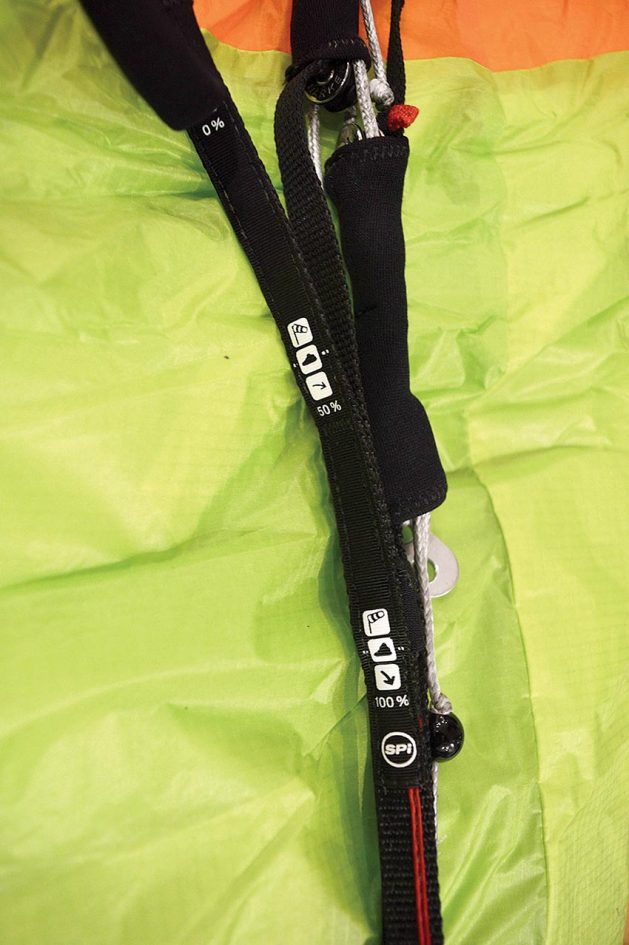 Advance’s speed system lets you know how much bar to apply to match the flying situation you are in. Photo: Brian Steele

Even with fat leather gloves the wing was easy to manage on the ground. The performance-oriented line-set does need a little extra care and attention though. The straw-coloured lines are less visible and therefore easier to snag on obstacles and on each other. I found myself doing a few more test inflations than I would on the Epsilon, but otherwise it was easy enough as there are not too many lines to check!

Over winter I had a few days flying in windy, overcast conditions with very weak thermals. Then, as spring appeared, I had an absolutely epic day from our local XC site Col de Bleine in the south of France – a 100km triangle with strong climbs, scratchy moments and long into-wind transitions. I also managed to get an hour or so on the Sigma 10 in thermic conditions.

My first impressions were that with 50 cells and a sleeker profile than the Epsilon, the wing was going to be even more fun. Launch required a little more damping than the Epsilon to avoid an overshoot but once up was easy to control.

My inbuilt expectation of Advance wings is to have a very smooth but slightly joyless ride. Certainly the Iota smooths out entry to thermals and cuts-in very cleanly. What surprised me though was the responsiveness and rather joyful feeling. The level of feedback is perfect. The wing helps you optimise your climbs without overloading you with information. There is also enough warning of impending collapses. Turn response is a little more immediate than the Epsilon but easier to modulate. You can really feel the changes in the air and optimise weak climbs.

However, this is no boring cruiser. When you want to be a little bit of a hooligan the wing is agile and can change turn direction in thermals very quickly.

Pitch and leading-edge feedback are nicely balanced. There is a definite step up in workload compared to the Epsilon, but the wing’s obedience means that a skilled pilot will soon learn the correct input to make.

I wondered about the weight ranges and had considered squeezing onto a size 23. I flew the size 25 a few kilos below the top of the seamless range and 8kg below the top of the certified range, and I never felt the wing was under-loaded or sluggish. Instead it felt loaded up across the span. Roll was easy to co-ordinate and the bank angle was easy to maintain. I never felt the wing was too roll unstable or that I was bullied out of climbs. 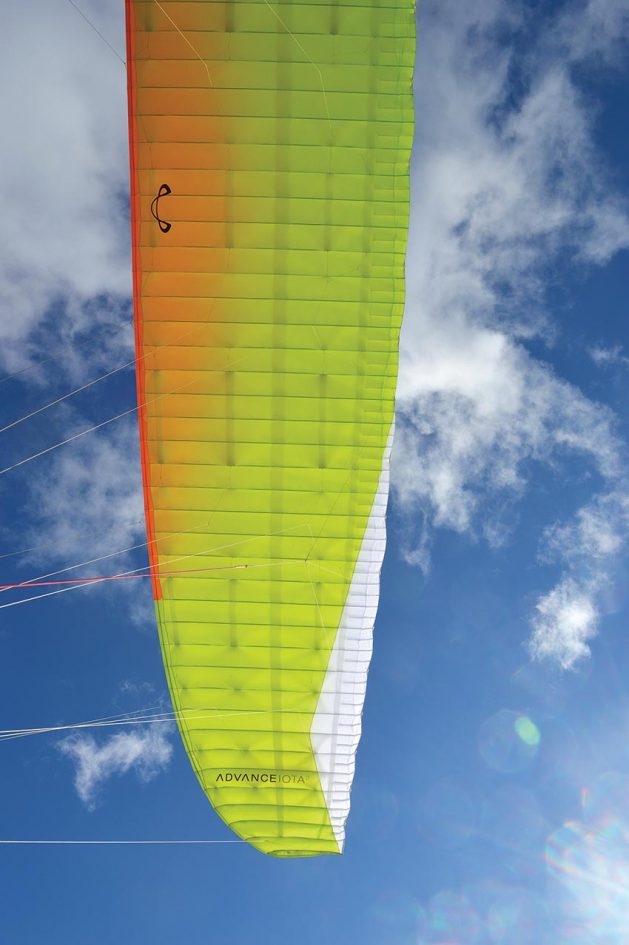 There are 59 cells in the wing. Photo: Brian Steele

With a mixed pack of EN-Cs and EN-Bs I set off on an XC. I climbed out easily and then tackled my first few transitions. I found the wing stabilised in strong cores very well. Once established the wing is a winner in terms of climb.

The speed-system travel is highly adjustable and pressure is moderate. On long glides I felt that the wing was very stable. I experimented with the C-riser handles but to be honest I found it easier to use gentle but direct pressure on the rear risers.

As a hardened EN-C pilot I was really surprised at how much I enjoyed the Iota 2 on a long XC. I never felt let down by the performance and felt encouraged to use all of the speed available. I’m not one for graphs, but the flat polar curve mentioned in the marketing really is there on this wing.

Indeed I think that the key trait of the Iota 2 is that it encourages the pilot to use all of its performance. The stability at speed is very reassuring regardless of pilot level. It has enough feedback to warn you when you are pushing too hard in rough air, but in general gives a nice smooth ride. 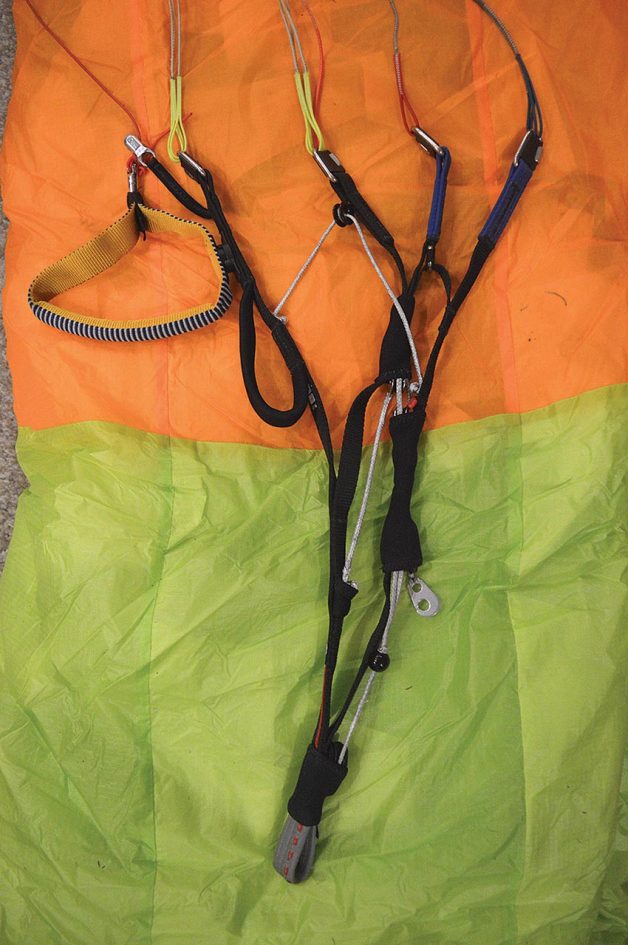 The Iota 2 does require more active piloting than the Epsilon. I used a wider brake range than I did on the Epsilon to catch some of the more dynamic surges and had to react more quickly.

Although the materials are a little lighter than some EN-Bs, I found that the wing did not have any of the unnerving rustling or yawing that you might associate with a lighter, more specialist wing. The wing feels well pressurised and co-ordinated and, once a pilot learns to understand the additional feedback and movement in the wing, they will really feel in control – it’s obedient.

I only had two collapses during my test flights. These were at speed and in pretty demanding thermic conditions. As expected, entry to the collapses were more dynamic than I experienced on the Epsilon, however the wing turned slowly to the collapsed side and it was reasonably easy to keep on course with weightshift alone. I applied a deep pump to open the wing quickly, but if left alone the Iota 2 would open spontaneously.

Half way around my long XC I looked at the epic sky from 3,800m and wondered if I still needed a Sigma 10. The wing has lovely handling and additional speed but also the aspect ratio to go with it. More efficient and a classic EN-C performer, in certain conditions it cut through the air so well it felt easier than the Iota. However, in rougher air there was more movement in yaw and pitch to manage. Also, the Sigma lacked some of the joyful handling and turn rate of the Iota.

If you choose the Iota 2, yes you will miss out on the top-speed of the Sigma, but for handling, climbing and day-to-day XC I would think carefully about what is best to have. A wing you can just about manage to fly, or a wing you can use to its maximum?

Spirals were easy to enter and modulate. Exits were a little more exciting than on the Epsilon but still easy to manage. There was a little more of a shoot forward after the surge but it was predictable and had very little sideslip during surge or dive. Big ears were not the cleanest. They tended to flap around with or without bar. However they were effective and the wing remained stable.

The Sigma 10 and other high aspect wings now represent quite a large step-up for lower EN-B pilots. The Iota 2 is therefore a perfect wing for talented intermediate pilots looking to improve on their early XC flights. I found the handling and feedback to be better than most EN-Cs without some of the unwanted roll instability in straight-line flight that some high-end EN-Bs have.

Nothing comes for free of course, the Iota 2 does require a step up in pilot ability versus the Epsilon and its peers. It is a little more fiddly to set up on launch than a lower-end wing thanks to those sexy unsheathed lines. Once mastered though it is a reliable trustworthy partner to take with you when you decide to cross into hostile terrain.

I’d ask my fellow EN-C pilots the same question I was asking myself after my big XC flight on the Iota 2. OK, your EN-C may look sexy and sound good on paper, but do you fly it at full speed very often? Do you really enjoy the handling?

If not, then I’d recommend giving the Iota 2 a test flight: you may fly faster, further and with a huge smile on your face.

Brian has been flying for 20 years. Brought up on hike-and-fly in the hills of Scotland he migrated to the southern French Alps a decade ago, where he regularly enjoys flying alpine XC on EN B+ / EN C wings. His other passion is road-biking.