In the run-up to the Hang Gliding World Championships 2013, which start in Australia on 7 January 2013, Grace Cain interviews some of the key pilots from the competition. Today, Corinna Schwiegershausen from Germany 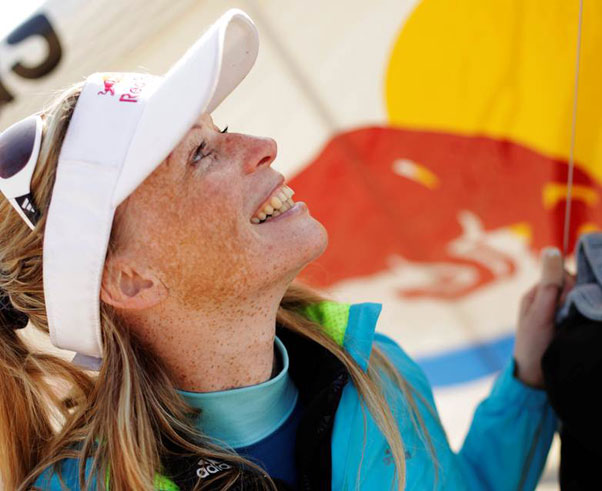 Tell us something of each win…
Hungary: I flew one task all on my own. Because I thought the conditions would get worse, I didn’t want to wait for the others. I made it around a 110km triangular course in the flatlands, behind me the clouds dissipated. I arrived about one hour before the next girl in goal and gained a great margin on the others which helped me a lot to win those worlds.

Greifenburg: I was leading TWO days and was about five minutes from goal when the days were stopped, thus cancelled because none of us had been in goal yet… A big lesson for positive thinking! On the last day, my team leader told me to “just stay with Kari”, as I was leading by enough points to win. But the conditions were so beautiful, racing along the 20km ridge of Gailtal, that I just had to pull in and ahead. It is great to win the title by being first in goal on the last day!

Florida: On a 78km flight to goal, I went a different way than all the others. I had to divert 90 degrees off course because of the starting sea breeze. My final glide, 15km against 15-20km/h headwind over lots and lots of white horse fences, was pretty nervewracking. I was rewarded with meeting Steve Morse, guitarist of Deep Purple, in goal (he was the owner of the goal airfield) and gaining some points by being the only one who made it in on that day. Two years later, Steve Morse invited me to see Deep Purple live in an open air concert in Germany!

Italy: Failing on the first day is always tough. Kathleen Rigg pulled away big time by being the only one in goal on the first day after a 90km triangle at Monte Cucco. It took me a lot of patience and hope, and only on the last-but-one day I managed to catch up to her.

When did you start competing?
I had been flying for a year and a friend, then German Women’s Champion Birgit Slembeck told me to come and fly Hessenmeisterschaft with her to improve my XC skills and have fun. I met many new pilots and learnt a lot fast in a very safe surrounding, so I started competing in the German League and Nationals as well. I wanted to see as many new countries as possible from the air! 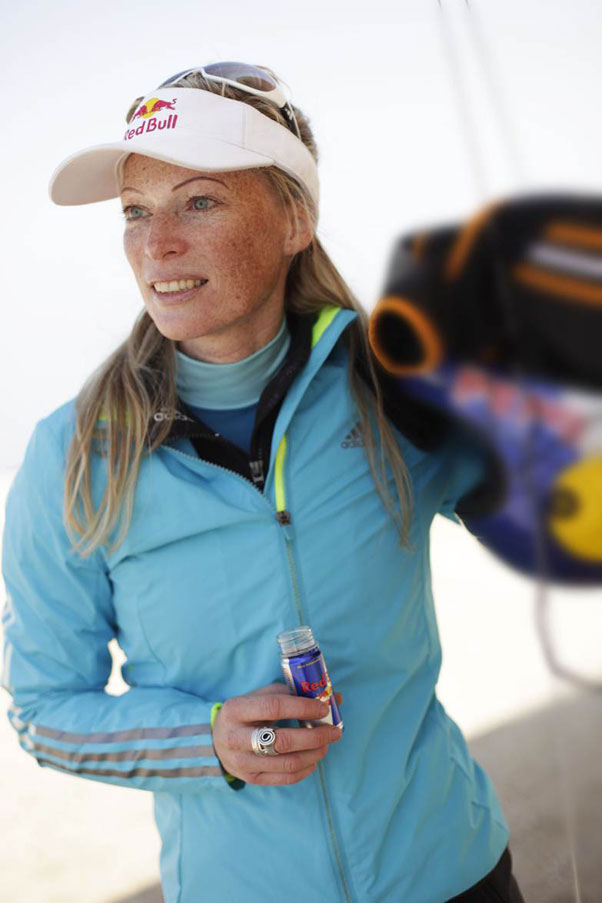 Who were your mentors or pilot role models when you first started flying
Bob Baier and former World Champion Tomas Suchanek were my absolute idols, and I was very thankful that they really answered my questions and helped me in a lot of competitions.

The tandem record flights with Tomas in the Australian desert, organised by Bill Moyes, boosted my self confidence and knowledge when flying cross country.

Also Judy Leden and Robbie Whittal have always been my heroes for having earned their medals in hang gliding and paragliding likewise.

Later on I admired skilled talents like Guido Gehrmann and Chrigel Maurer, both for their amazing flying and their great attitude.

Are there any pilots out there that have helped you become the pilot you are today?
Christian Ciech helped me get over my fear of crossing non landable zones by always pulling down and finding thermals on course for me below me when we went training in the Bassano area.

I always adored Steve Moyes’ elegant ability to become “one” with his wing and barely move by anticipating the air, and I try to fly a similar style (I’m a long way away, but he just is one of a kind…)

Also Gerolf Heinrichs had a huge impact on my flying success by being the first to develop a high performance glider that is manageable for small pilots, and then by showing me how to fine tune it.

Last but not least, it was Bill Moyes who really inspired me – he recognises talents in the sport and appreciates the work the pilots are doing for the company he founded. A tough school, but very rewarding to get his compliments (which happens seldom enough;)).

Who taught you to fly and where?
Uli Kroll from Flugschule Wasserkuppe in Germany taught me the first steps, then my club teachers Peter Obermeier, Steffen Bockstaller, Wolfgang Lintl, Stefan Hamann and Jörg Papenhausen from DFC Weser in Bremen trained me in the flatlands of Bremen and in the mountains of Austria.

Bill Moyes, Clive Gilmore and Bobby Bailey taught me how to aerotow – sometimes the tough “eat the dust” way!

What keeps you motivated?
My father started the sport and I immediately wanted to go flying as well. It just felt natural for me. I love to be in the air, that is my element, and competitions are just a good excuse to spend more time up there.

Now I enjoy the fact that every flight is different and comes with its own little adventure. It is a lot of fun to represent our sport in the media and it is an honour to be a Red Bull and adidas athlete!

Where are your favourite places to fly?
I like Greifenburg in Austria best, because it offers a lot of safe flying days for big cross countries and has a perfect infrastructure. But also my home site of Hochfelln is fantastic. It offers a very early launch into large triangles, as Tom Weissenberger proved with his 360km triangle a few years ago.

Then of course Canungra in Australia feels like my home, the change between mountains and flatlands are amazing – and the Canungra pilots, specially the Durands, always make me feel like “family”, they are very supportive.

For the highest altitudes, I like soaring up with Rudi Gotes and Miguel Gutierrez in Valle de Bravo (Mexico) a lot, no matter whether with hang or paraglider. And just for a relaxed little float when I’m working on a flight to Argentina (as a flight attendant for Lufthansa), I’m always happy to see Flavio at FlyRanch Buenos Aires!

Take us through your kit.
I have been fond of Moyes gliders since I moved from a Firebird Uno up to a GTR. The concept of fibreglass wingtips holds many handling advantages in my opinion, and I really like the perfect shape of the Moyes wings.

With the Bräuniger compeo, I never missed a single turnpoint in a competition, and I like the fact that I can use them for world record trials as well. But I always take a small Garmin Foretrex as a backup, must be the German thorough planner!

Woody Valley harnesses are custom made, comfortable and easy to lie down and get upright again before landing. I like the combination of safety aspects with low drag performance.

Since it hit the market, I have used the Icaro 4 flight helmet. It always saved my skull and teeth whenever I had a doubtful landing. But I also like the visor very much – I wear contact lenses, so it saves my eyes from the sun and the wind.

For functional wear, I found a pair of adidas gloves with the perfect grip on aluminium and carbon – very important for safe take offs for small people! Adidas running shoes are light, have a great grip and they are really shock absorbing, which often saves my knees when landing.

I like to wear Timezone trousers, because they have a lot of pockets for batteries, pens, GPSs, spare parts. They have a comfortable, relaxed fit and many models are adjustable from long to short legs.

As a base layer, I love the all natural Icebreaker gear. Keeps me cool in the sun and warm in the air. And doesn’t ever smell! I usually wear two layers of Icebreaker, and then one or two of a breathable, yet windproof and insulating adidas top layers.

With sunglasses I have experimented a lot. I found The Shield (with visor) and Elevation Clima Cool with LST active orange lenses to be perfect for great contrast on the ground for landings and in the sky to perceive the first whiffs of clouds earlier than most others. 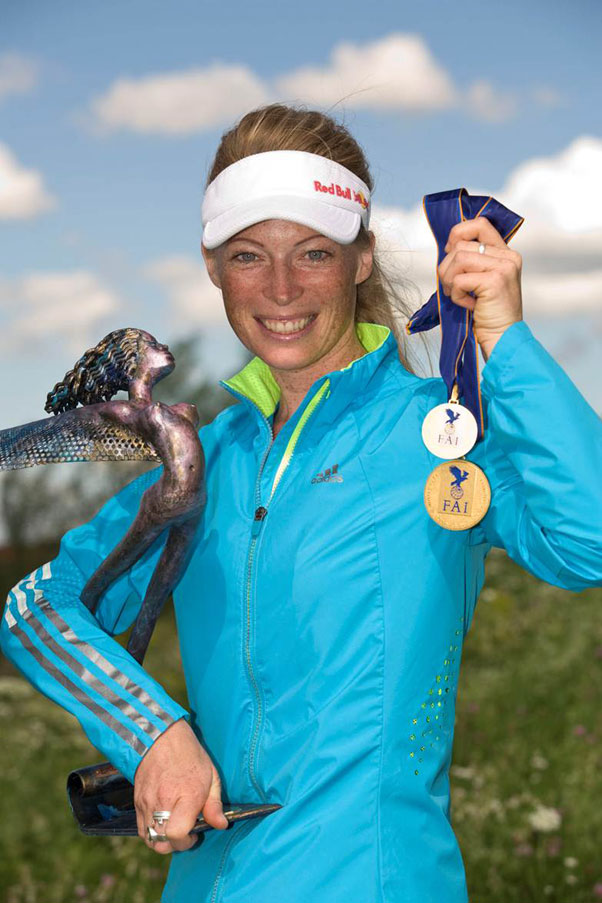 Corinna with medals and a trophy from the Monte Cucco World Championships, 2011

What is your biggest tip for the pilots attending their first Hang Gliding World Championship?
Be prepared – get the best equipment possible and test it before the comp, so you know you are comfortable and safe!

Also look into the psychological sides of a long, exhausting comp – I could fill a whole article with this, so just one example:

Learn to admit that you make mistakes, analyse them to improve your skills, and then forgive yourself. And try not to make the same mistake again.

Look at the other pilots with respect and see them as your friends. They will help you find thermals, learn fast and get better. And I never forget that there are and always will be pilots with much better skills than mine, and it is great to always keep learning!

Do you have any words of wisdom for the new pilots starting out in hang gliding?
Always be humble and happy every day you have the privilege to spread your wings and fly!

What are you looking forward to most during this competition?
Many of my long term friends will compete in Forbes, and I can´t wait to fly with them again. Some of them I haven´t seen for years, and it is just beautiful to thermal up in a 5m/s to a 4,000m base together.

The pre-worlds were perfectly organised with the best and safest launch system I have ever seen in a comp that big.

And I have to admit that Im looking forward to seeing some Australian wildlife, soaring with wedge-tailed eagles, landing in a paddock with kangaroos and emus, driving back through flocks of fruit bats!

What is your glider of choice for the Worlds in 2013?
The best glider I have flown so far – the Moyes RX3! Extremely easy handling, yet an incredible performance, I just love it! With the Moyes RX3, aerotowing and landing was piece of cake in Forbes at the pre-worlds last January! And this is usually a big thing for a girl of 53kg body weight.

Will this be your first time at Forbes?
I have flown a few Forbes and Hay competitions, and it is no secret that I feel at home in Australia. My last comp in Forbes was the Pre-Worlds in January 2012. I like the mix of racing and technical conditions, and we always experienced both. It is great fun to cover so many kilometres and flying hours in one competition.

Any predictions?
There will be so many top pilots – former and current world champions like Alex Ploner, Attila Bertok, Manfred Ruhmer, but I will also keep an eye on Jonny Durand, Kraig Coomber and Robin Hamilton. With Kathleen Rigg, Françoise Dieuzede, Julia Kucherenko and Tove Heaney I also have a huge amount of competing talent in the women’s ranking. The title won’t be a giveaway.

Top three countries could be Australia – those guys are soooo motivated! – then of course Italy, they never make mistakes, and I see the US team and this time Germany very strong and with a good possibility to be ranking in the top three.