In the run-up to the Hang Gliding World Championships 2013, which start in Australia on 7 January 2013, Grace Cain interviews some of the key pilots from the competition. Today, Alex Ploner from Italy, current World Champion. 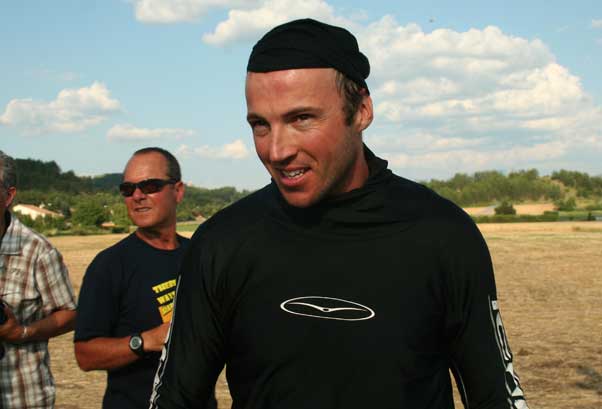 Alex Ploner, after winning the last task at the Worlds in Laragne, 2009. Photo: James Pagram

Alex, you’ve been World Champion twice. Tell us about the first time.
The last time I became World Champion was in Monte Cucco during the last championships in 2011. I was flying my Icaro Laminar. It wasn’t a very lucky championship because of the weather, but I still have a good memories from it.

What was the most memorable task?
The second task was definitely something I won’t forget. I was in the lead and missed a ‘fly-through’ turnpoint, so I had to fly back 2km to make it and afterwards I had to push very hard to catch Christian in the lead and we were able to finish several minutes in front of the rest of the pack.

But the most memorable task for me is still the last task at the Worlds in Laragne in 2009. Going into the last task I was second and Manfred Ruhmer was in first. The task was a big triangle, 170km I think, the weather was very good, nice clouds around and a little north wind.

About 15 minutes after task start our team leader told the team that Manfred had landed – he’d bombed. I knew I only had to make goal, and that shouldn’t have been a problem on a day like we had, but those were the most difficult 150km of my life! 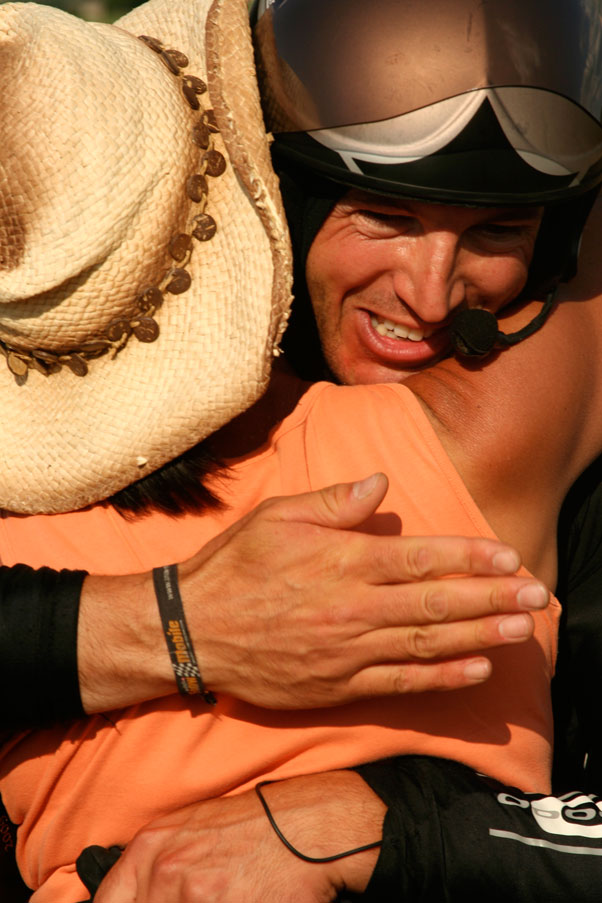 Alex Ploner celebrates after winning his first World Championships. Will he do it again? Photo: James Pagram

What other World Championships have you competed in?
I’m part of the Italian national team since 1999 and I’ve participated to all flex and rigid world championships since then, winning rigid in 2001 (class 2) 2008 (class 5) and the last two, class 1.

When did you start flying?
I started in 1995 and I first flew in a local comp in the summer of 96! I wanted to learn and my flying instructor told me to fly competitions and learn from the better pilots

Who were your mentors?
The first mentor was Karl Reichegger, Italian team member for many years

Are there any pilots out there that have helped you become the pilot you are today?
Yes, Christian Ciech and Manfred Ruhmer above all, but I would say that I learned something from every pilot I flew with!

Who taught you to fly, and where?
It was Toni Niderbrunner and the training hill was in one of the nicest places in the world, the Seiser Alm, in the Dolomites, the mountains I’m in love with! Afterwards my first flights happened in Sand in Taufers, a little more suitable for beginners!

What keeps you motivated?
Since I was a child I’ve always been very interested in everything that was flying. So as soon as possible I wanted to try the feeling of flying and fell in love with hang gliding. Since then my passion for the sport has influenced my life, and that passion keeps me going on.

Favourite place to fly?
Definitely my birthplace, the Dolomites.

Alex celebrating his 2009 World Championship win above the Dolomites

Tell us about your kit.
I fly with Icaro hang gliders, Woody Valley harnesses, adidas clothing and Brauniger instruments.

What is your biggest tip for the pilots attending their first Hang Gliding World Championship?
Simply enjoy it! Have fun and learn from the others

Do you have any words of wisdom for the new pilots starting out in hang gliding?
When you start, everything is difficult and it takes time. Going paragliding would be so much easier, but after a little time you won’t regret all the effort and you’ll be pleased to hang glide!

The Forbes Flatlands Competition is known to dish out some of best cross-country flying in the world. The last competition held at Forbes provided an average total distance of 881km for each pilot and an averaged 36.4 hours flying time. Who will be driving for your team and have you had to strike up any deals with them before they had signed themselves up to be your driver?
I’m very lucky to travel with the team and our team leader Flavio Tebaldi already took care of all the logistic stuff so that we can only think at flying.

What are you looking forward to most during this competition?
I’m looking forward to visiting Australia, flying in conditions that are very good and very consistent! And of course flying with all the pilots from all over the world again

Will this be your first time at Forbes?
Yes. I’ve been in Hay in 2005 so I’ve seen the Australian sky but it will be my first Forbes comp.

Do you have any predictions for the Worlds in 2013?
It will be a little different from the last two Worlds. Flying in the flatlands is different and there are some specialists out there in flatland flying! But I’m not naming names. I just hope I do well!