Sacha Dench has successfully completed her epic 7,000km adventure Flight of the Swans. She arrived in the UK on 5 December 2016, after flying through northwestern Europe from northern Siberia. Her flight was made to raise awareness about the plight of the Bewick’s Swan, which is under threat.

Before she set off we spoke to her about her plans – the interview by editor Ed Ewing was published in Cross Country 171 back in July this year. Congratulations on an amazing achievement Sacha! 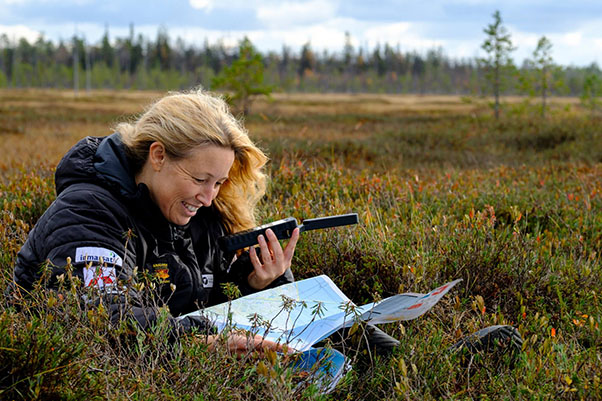 “I’m trying to follow the Bewick’s swan migration from Russia back to the UK. That’s pretty much it.”

Sacha Dench is an Australian-born biologist who works for the Wildfowl and Wetlands Trust (WWT) in the UK. She is 41, and in a former life was a champion free-diver and a cave diver. She doesn’t seem to know fear, describing diving to 63m on just one breath as, “Peaceful I suppose, very three dimensional”.

However, it was in fact facing here fears that got her into flying in the first place. “I didn’t actively want to learn to fly,” she explains from her office at the WWT in England. “I started to learn because I had a really bad flight in Panama when I was on a job.”

After studying biology at University College London she worked as a turtle geneticist, with sharks and then for the Environment Agency on pollution. But about 15 years ago she moved into conservation and media production working for wildlife charities.

About a decade ago she was working in the Caribbean and took a local flight out to the islands. “I was with an anthropologist. We got in a small plane, two in the front and a few in the back.

“We had to fly out of Panama City and go and find this little airstrip in the San Blas Islands, where there are 3,000 islands.”

During the flight a storm developed, and the pilot decided he could make it through. However, they ended up, “in the middle of this storm above the island, with the pilot diving down below the clouds trying to find this little airstrip.” 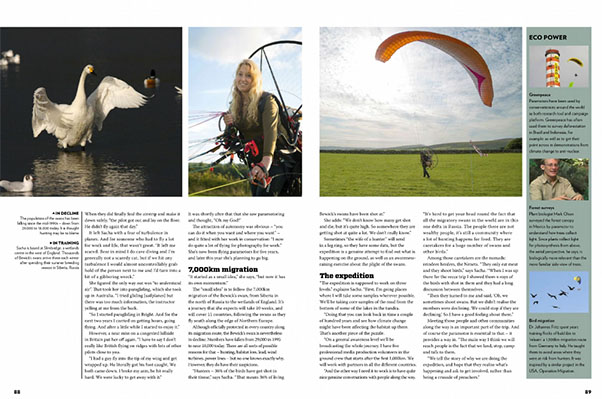 They were lost. “He couldn’t find it, and it went on for about half an hour. The pilot was obviously petrified because he went pale, and we couldn’t get any information. The two locals in the back with us, she got out her prayer book and started praying and crying. It was horrible. It was half an hour of extreme fear.”

When they did finally find the airstrip and make it down safely, “the pilot got out and lay on the floor. He didn’t fly again that day.”

It left Sacha with a fear of turbulence in planes. And for someone who had to fly a lot for work and life, that wasn’t great. “It left me scared. Bear in mind I do cave diving and I’m generally not a scaredy cat, but if we hit any turbulence I would almost uncontrollably grab hold of the person next to me and I’d turn into a bit of a gibbering wreck.”

She figured the only way out was “to understand air”. That took her into paragliding, which she took up in Australia. “I tried gliding [sailplanes] but there was too much information, the instructor yelling at me from the back. So I started paragliding in Bright. And for the next two years I carried on getting hours, going flying. And after a little while I started to enjoy it.”

However, a near miss on a congested hillside in Britain put her off again. “I have to say I don’t really like British flying on ridges with lots of other pilots close to you. I had a guy fly into the tip of my wing and get wrapped up. He literally got his foot caught. We both came down. I broke my arm, he hit really hard. We were lucky to get away with it.”

It was shortly after that that she saw paramotoring and thought, “Oh my God!” The attraction of autonomy was obvious – “you can do it when you want and where you want” – and it fitted with her work in conservation: “I now do quite a lot of flying for photography for work.” She’s been flying paramotors now for five years, and later this year she’s planning to go really, really big. 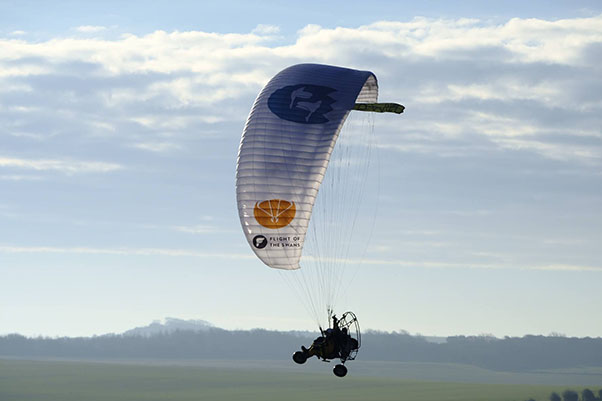 “It started as a small idea,” she says, “but now it has its own momentum.” The “small idea” is to follow the 7,000km migration of the Bewick’s swan, from Siberia in the north of Russia to the wetlands of England. It’s a journey that she expects will take 10 weeks, and will cover 11 countries, following the swans as they fly south along the edge of Northern Europe.

Although it is officially protected in every country along its migration route, the Bewick’s swan is nevertheless in decline. Numbers have fallen from 29,000 in 1995 to near 18,000 today. There are all sorts of possible reasons for that – hunting, habitat loss, lead, wind turbines, power lines – but no one knows exactly why. However, they do have their suspicions.

“Hunters – 36% of the birds have got shot in their tissue,” says Sacha. “That means 36% of living Berwick’s swans have been shot at.” She adds: “We don’t know how many get shot and die, but it’s quite high. So somewhere they are getting shot at quite a lot. We don’t really know.”

Sometimes “the wife of a hunter” will send in a leg ring, so they have a bit of an idea, but the expedition is a genuine attempt to find out what is happening on the ground, as well as an awareness raising exercise about the plight of the swans.

“The expedition is supposed to work on three levels,” explains Sacha. “First, I’m going places where I will take some samples wherever possible. We’ll be taking core samples of the mud from the bottom of some of the lakes in the tundra. Doing that you can look back in time a couple of hundred years and see how climate change might have been affecting the habitat up there. That’s another piece of the puzzle.

“On a general awareness level we’ll be broadcasting the whole journey. I have five professional media production volunteers in the ground crew that starts after the first 1,000km. We will work with partners in all the different countries.

“And the other way I need it to work is to have quite nice genuine conversations with people along the way. It’s hard to get your head round the fact that all the migratory swans in the world are in this one delta in Russia.

“The people there are not wealthy people,” she explains, “it’s still a community where a lot of hunting happens for food. They are caretakers for a huge number of swans and other birds.” 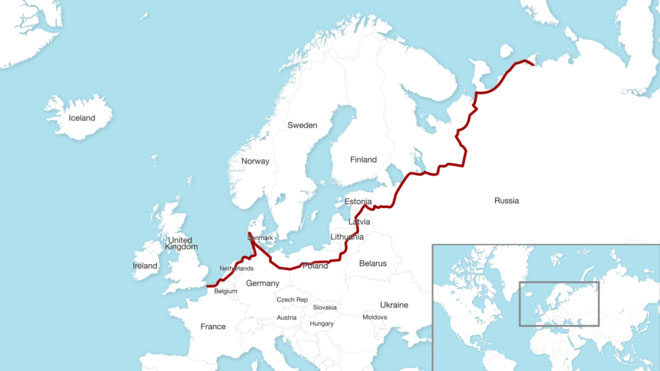 Among those caretakers are the nomadic reindeer herders, the Nenets. “They only eat meat and they shoot birds,” says Sacha. “When I was up there for the recce trip I showed them x-rays of the birds with shot in them and they had a long discussion between themselves. Then they turned to me and said, ‘Oh, we sometimes shoot swans. But we didn’t realise the numbers were declining. We could stop if they are declining.’ So I have a good feeling about them.”

Meeting those people and other communities along the way is an important part of the trip. And of course the paramotor is essential to that – it provides a way in. “The main way I think we will reach people is the fact that we land, stop, camp and talk to them. We tell the story of why we are doing the expedition, and hope that they realise what’s happening and ask to get involved, rather than being a crusade of preachers.”

She adds: “Conservation can be really arrogant. But what I’ve found so far is nobody wants the swans to be in decline and people are generally horrified at the numbers of birds with shot in them. But they just want a normal conversation and don’t want to be made to feel like they are the baddies.” 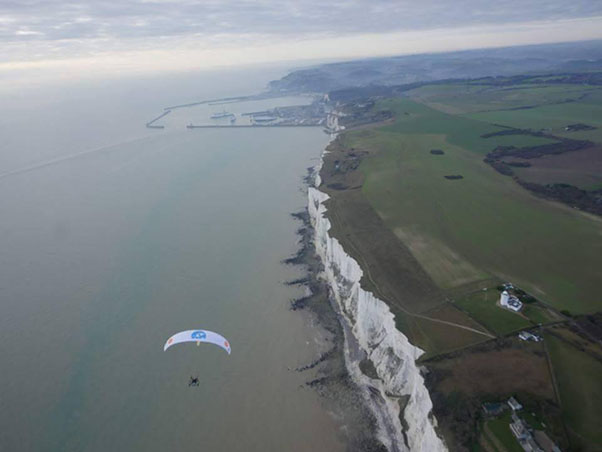 Arriving above the White Cliffs of Dover, UK, on 5 December 2016. Image: WWT / flightoftheswans.org

The first 1,000km stretch in Arctic Russia has no roads, so there is no option for ground crew, and there are no airstrips. So the only thing you can really fly it in is a paramotor, taking off and landng in the tundra. In Russia she will be supported by Alexander Bogdanov, a legend in paramotoring in Russia. She has also made contacts with pilots in all 11 countries along the way. “We won’t be flying with 10 pilots across the wetlands, but it will be good to have a small team,” she says.

She heads north first in August to lay the groundwork, before getting ready to fly in mid-September. A dozen of the swans are already tagged with GPS markers and can be followed, and when the first one of those leaves the tundra, Sacha will leave too. She will have a microlight team as back up and support, a ground crew after the first 1,000km, plus there are 200 volunteers involved.

“I reckon it will be a 10 week trip,” she says. “If you go in a straight line it is about 5,000km, but it will a lot longer because obviously I have to migrate via wetlands and land.”

She is looking forward to it: “It’s been in the planning now for two years, and it has attracted support from so many people that it has gained a momentum I couldn’t have given it on my own.” It has attracted the interest of two UN bodies, and Sir David Attenborough has given the expedition his blessing.

But at the end of the day, it will still be her, her wing, and her Fresh Breeze motor out there in Siberia, pointing south. She is resolute. “It’s bloody huge, yes. And in terms of a physical challenge, yes, by far it’s the biggest project I’ve ever done.”