Ian Blackmore reviews the latest in a long line of pedigree wings from Switzerland’s Paratech. First published in Cross Country, 2004 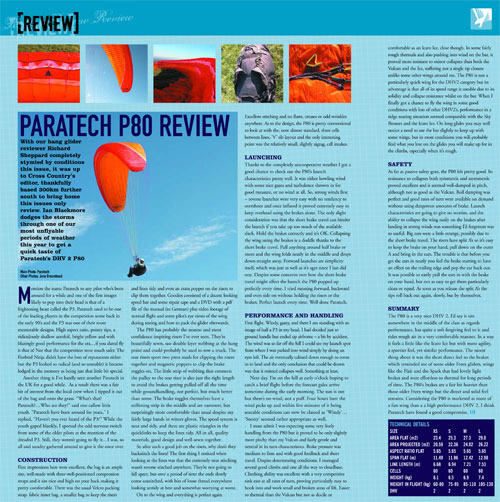 From the XCmag archive... the Paratech P80 review

Mention the name Paratech to any pilot who’s been around for a while and one of the first images likely to pop into their head is that of a frightening beast called the P3.

Paratech used to be one of the leading players in the competition scene back in the early 90s and the P3 was one of their more memorable designs. High aspect ratio, pointy tips, a ridiculously shallow aerofoil, bright yellow and with blazingly good performance for the era…if you dared fly it that is!

Not that the competition were much safer. The Firebird Ninja didn’t have the best of reputations either but the P3 looked so radical (and so unstable) it became lodged in the memory as being just that little bit special.

Another thing is I’ve hardly seen another Paratech in the UK for a good while. As a result there was a fair bit of interest from the local crew when I tipped it out of the bag and onto the grass. “What’s that? Paratech?…Who are they?” said one callow little youth.

“Paratech have been around for years,” I replied. “Haven’t you ever heard of the P3?” While the youth gaped blankly, I spotted the odd nervous twitch from some of the older pilots at the mention of the dreaded P3. Still, they weren’t going to fly it…I was, so all and sundry gathered around to give it the once over.

CONSTRUCTION
First impressions here were excellent, the bag is an ample size, well-made with three well-positioned compression straps and it sits nice and high on your back making it pretty comfortable.

There was the usual Velcro packing strap, fabric inner bag, a smaller bag to keep the risers and lines tidy and even an extra popper on the risers to clip them together. Goodies consisted of a decent looking speed bar and some repair tape and a DVD with a PDF file of the manual (in German) plus video footage of normal flight and some pilot’s eye views of the wing during testing and how to pack the glider afterwards.

The P80 has probably the neatest and most confidence inspiring risers I’ve ever seen. They’re beautifully sewn, use double layer webbing at the hang point and could probably be used to tow a truck. The rear risers sport two press studs for clipping the risers together and magnetic poppers to clip the brake toggles on.

The little strip of webbing that connects the pulley to the rear riser is also just the right length to avoid the brakes getting pulled off all the time while groundhandling, not perfect, but much better than some.

The brake toggles themselves have a stiffening strip in the middle and are narrower, but surprisingly more comfortable than usual despite my fairly large hands in winter gloves. The speed system is neat and tidy, and there are plastic triangles in the quicklinks to keep the lines tidy. All in all, quality materials, good design and well-sewn together.

So after such a good job on the risers, why don’t they backstitch the lines? The first thing I noticed when looking at the lines was that the extremely neat stitching wasn’t reverse stitched anywhere. They’re not going to fall apart, but over a period of time the ends slowly come unstitched, with bits of loose thread everywhere looking untidy at best and somewhat worrying at worst.

On to the wing and everything is perfect again. Excellent stitching and no flaws, creases or odd wrinkles anywhere. As to the design, the P80 is pretty conventional to look at with the, now almost standard, three cells between lines, ‘V’ rib layout and the only interesting point was the relatively small, slightly zigzag, cell intakes.

LAUNCHING
Thanks to the completely uncooperative weather I got a good chance to check out the P80’s launch characteristics pretty well. It was either howling wind with some nice gusts and turbulence thrown in for good measure, or no wind at all.

So, strong winds first – reverse launches were very easy with no tendency to overshoot and once inflated it proved extremely easy to keep overhead using the brakes alone. The only slight consideration was that the short brake travel can hinder the launch if you take up too much of the available slack. Hold the brakes correctly and it’s OK.

Collapsing the wing using the brakes is a doddle thanks to the short brake travel. Pull anything around half brake or more and the wing folds neatly in the middle and drops down straight away. Forward launches are simplicity itself, which was just as well as it’s ages since I last did one.

Despite some concerns over how the short brake travel might affect the launch the P80 popped up perfectly every time. I tried running forward, backward and even side on without holding the risers or the brakes. Perfect launch every time. Well done Paratech.

PERFORMANCE AND HANDLING
First flight. Windy, gusty, and there I am standing with an image of half a P3 in my head. I had decided just to ground handle but ended up airborne – a bit by accident. The wind was so far off the hill I could see my launch spot from where I was parked into wind simply by doing an eyes left. The air eventually calmed down enough to come in to land and the only conclusion that could be drawn was that it resisted collapses well. Something at least.

Next day. I’m on the hill at early o’clock hoping to catch a brief flight before the forecast gales arrive sometime during the early morning. The sun is out but there’s no wind, not a puff. Four hours later the wind picks up and within five minutes of it being soarable conditions can now be classed as ‘Windy’ … ‘Snotty’ seemed rather appropriate as well.

I must admit I was expecting some very lively handling from the P80 but it proved to be only slightly more pitchy than my Vulcan and fairly gentle and neutral in its turn characteristics. Brake pressure was medium to firm and with good feedback and short travel. Despite deteriorating conditions, I managed several good climbs and one all the way to cloudbase.

Climbing ability was excellent with a very competitive sink rate at all rates of turn, proving particularly easy to hook into and work small and broken areas of lift. Easier to thermal than the Vulcan but not as docile or comfortable as an Icaro Ice, close though.

In some fairly rough thermals and also pushing into wind on the bar, it proved more resistant to minor collapses than both the Vulcan and the Ice, suffering not a single tip closure unlike some other wings around me.

The P80 is not a particularly quick wing for the DHV2 category but its advantage is that all of its speed range is useable due to its solidity and collapse resistance whilst on the bar. When I finally got a chance to fly the wing in some good conditions with lots of other DHV2’s performance in a ridge soaring situation seemed comparable with the Sky Brontes and the Icaro Ice.

On long glides you may well notice a need to use the bar slightly to keep up with some wings, but in most conditions you will probably find what you lose on the glides you will make up for in the climbs, especially when it’s rough.

SAFETY
As far as passive safety goes, the P80 felt pretty good. Its resistance to collapses both symmetric and asymmetric proved excellent and it seemed well-damped in pitch, although not as good as the Vulcan.

Roll damping was perfect and good rates of turn were available on demand without using dangerous amounts of brake. Launch characteristics are going to give no worries, and the ability to collapse the wing easily on the brakes after landing in strong winds was something I’d forgotten was so useful.

Big ears were a little strange, possibly due to the short brake travel. The risers have split A’s so it’s easy to keep the brake on your hand, pull down on the outer A and bring in the ears. The trouble is that before you get the ears in neatly you feel the brake starting to have an effect on the trailing edge and pop the ear back out.

It was possible to easily pull the ears in with the brake on your hand, but not as easy to get them particularly clean or equal. As soon as you release the split A’s the tips roll back out again, slowly, but by themselves.

SUMMARY
The P80 is a very nice DHV 2. I’d say it sits somewhere in the middle of the class as regards performance, has quite a soft forgiving feel to it and rides rough air in a very comfortable manner.

In a way it feels a little like the Icaro Ice but with more agility, a sportier feel, yet similar performance. The nicest thing about it was the short direct feel to the brakes which reminded me of some older Freex gliders, wings like the Flair and the Spark that had lovely light brakes and were effortless to thermal for long periods of time.

The P80’s brakes are a fair bit heavier than those older Freex wings but the direct and solid feel remains. Considering the P80 is marketed as more of a fun wing than a a high performance DHV 2, I think Paratech have found a good compromise.