Luc Armant won the first Paragliding World Cup comp of the 2017 season, putting himself and the Ozone Enzo 3 that he helped design at the top of the leaderboard after a week of flying in the French Alps.

Having started strongly by winning the first task Armant then placed consistently for much of the rest of the competition coming 1st, 7th, 5th, 5th and 18th. However, on the last task he missed goal by 2km and placed 67th. 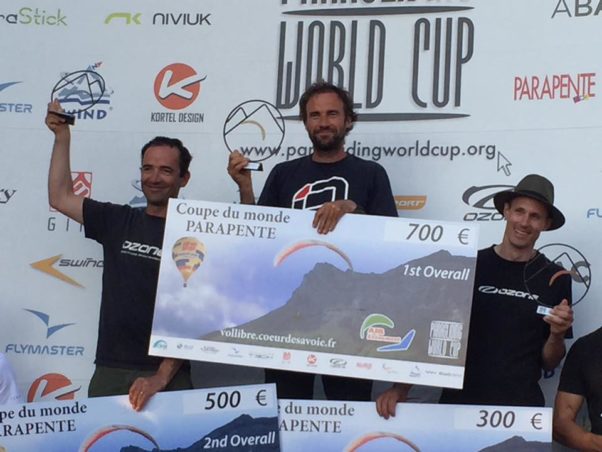 Overall podium at the PWC France, May 2017

That wasn’t enough to knock him off the number one spot though, and he finished the competition 19 points ahead of second placed Julien Wirtz (FR). Uli Prinz was third. All three pilots were flying Ozone Enzo 3s. 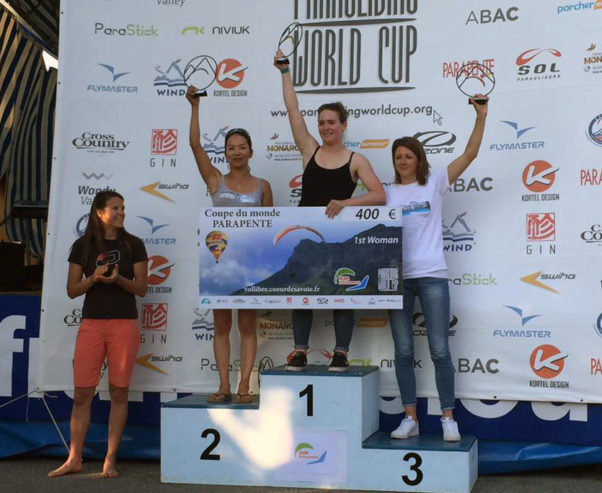 Méryl Delferrière won the Women’s class, ahead of Seiko Fukuoka Naville and Laurie Genovese. All three women pilots are French. Delferrière and Genovese were flying Ozone Zenos, Seiko was on a new Enzo 3.

The competition was the first outing for the highly anticipated Ozone Enzo 3 and saw it go head-to-head with the new Gin Boomerang 11. Both wings are new-generation CCC (competition) gliders.

Ozone dominated the podium and the Top 10, with eight out of the top 10 pilots flying Ozone and only two on Gin.

Maxime Pinot (Gin Boomerang 11) was ‘man of the match’, winning two tasks out of the six, including the final 116km task.

The PWCA reported: “The [last] task split the pilots up completely. At one point we had 2014 Superfinal Champion Maxime Pinot, European and World Champion Honorin Hamard, 2012 European Champion Yassen Savov all racing neck and neck, all taking different routes.

“Maxime stormed into goal. Unfortunately the leaders behind him didn’t have enough height and watched a further 71 pilots fly over their heads and into goal. Despite not making goal, Luc Armant kept his overall lead.”

In the Teams category, both Ozone and Gin scored 99, placing equal first – a draw.

Unfortunately the last task on the Friday 26 May 2017 saw two serious accidents where pilots were hospitalised. The next day was given over to free flying, which under PWCA rules is allowed.

The PWCA reported: “We are sad to report that two serious accidents occurred during yesterday’s task. Both pilots are now being cared for in hospital and we will be keeping their families informed on progress – nothing further, however, will be posted here.

“After six days of intensive flying we feel that the sportive objective of the competition has been fully realised and it is not necessary to extend the event any further. Within the rules of the Paragliding World Cup, therefore, the competition is now over.”

The next leg of the Paragliding World Cup is 17-24 June in Serbia.