Cross Country magazine 127 has a big feature on lightweight paragliding equipment in it. That rings a bell with French pilot and mountaineer Michel Rudolf from Parapente Planet (www.parapente-planete.com) who back in May 2009 climbed on and flew from Manaslu, at 8,156 m the eighth highest mountain.

Michel, how heavy was your flying gear?

I had a Nervures Huapi XS mountain glider which weighs 2.9 kg and is 21 m2. Before leaving, I had to decide which glider to take and I think I made the right choice. An Ozone Ultralite 19 would have been better maybe, because it’s lighter than the Huapi XS mountain and the take off capacity is about the same.

What harness did you use?

A Nervures Expé harness which weighs 400g, which I also used as a climbing harness. 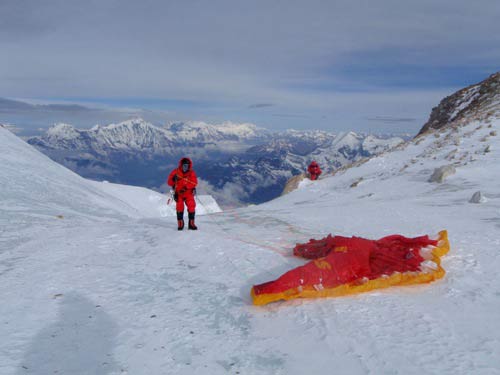 Tell me about Manaslu – what sort of mountain is it?

Manaslu is a beautiful mountain north west of Kathmandu in Nepal, not far from the Annapurna range. Access is quite hard – it’s a six-day hike, but the climbing is not so difficult. It’s a little harder than Cho Oyu. Due to administrative complications on Cho Oyu and Shishapangma these last years, there are more expeditions on Manaslu now. At the time we were there, we guess that about 10 other expeditions were trying to climb the mountain.

Who was on the team?

I was part of a French expedition lead by French guides Paulo Grobel and François Damilano, but I was the only one with a paraglider.

Have you climbed and flown from any other 8000 m peaks?

Was your main focus climbing the mountain or flying off it?

The expedition was a climbing expedition only. I had some difficulty to be accepted in the group because they saw paragliding as an additional danger, and 3 kg more to carry is also an additional handicap. But I made an arrangement to do some tandem flights with the Nepalese team after the expedition, and that seemed to help.

My plan was to take off as near as possible from the summit. But we had to withdraw at 7,500 m because bad weather was coming. The guide told us it was dangerous to go on. Despite the great motivation we had to get to the top, all eight members of the team accepted his advice after a few minutes.

So then you flew down?

The take off was just 50 m above our last camp at 7,440 m and faced west. It was not too steep, but had very slippy ice and some rocks below. Quite dangerous… The guide was right – half an hour after my take off the fog arrived and it began to snow. It was no longer possible to fly.

What time did you launch?

At 7.30 am. We started to walk at 5 am, and after 90 minutes we got back to the camp, and I decided very quickly to fly. The wind was quite strong, and with poor air density, the glider was very nervous. But I was well acclimatised and really aware and in good shape.

Were you using oxygen on the mountain?

Not at all! I consider it a drug. We met some Japanese and Korean climbers with oxygen, and they didn’t seem in good shape!

How cold was it? 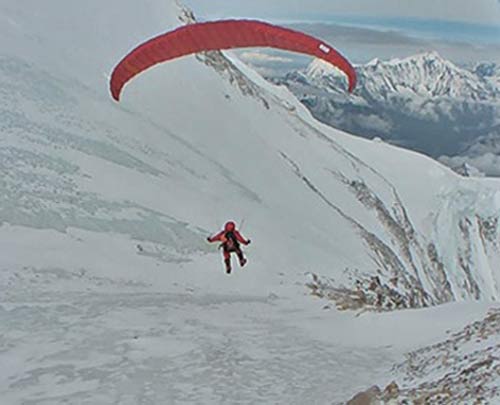 So you took off – did you get any lift or was it straight down?

I hit a small area of dynamic lift when I turned the corner just after taking off, due to strong wind. Otherwise the rest of the flight was quiet.

What was the flight like? Was it smooth? Rough?

After the take off, the wind was strong, maybe 40 km/h, but regular and the flight was almost quiet.

And what was the terrain like that you flew over?

I flew above Manaslu glacier, and over the climbing route, and passed very close (50 m high!) to base camp at 4,900 m. From there I got down to the valley. 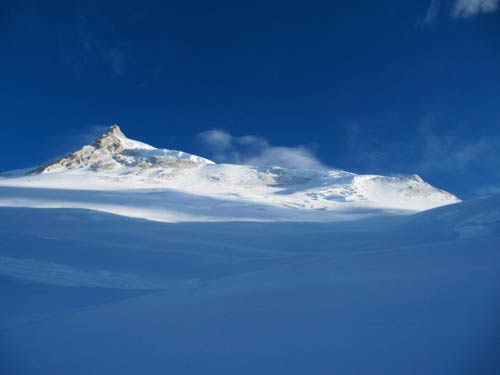 And how was the landing?

I landed in the valley at about 3,600 m, 5 km from Samagaon village. The flight took 30 minutes and I landed quite easily at 8 am. But the field was not large, I had no idea about the wind on the ground, and it was difficult to run with big snow boots. But much easier than on take off. After I’d landed, and was alone in this field, it took me 20 minutes to realise where I was. I had a lot of different feelings. I was disappointed not to have reached the summit but very happy to have flown down the mountain.

How long were you on Manaslu altogether?

So will you go back to get the summit?

Maybe, but it’s a lot of preparation, a lot of money. But I was very frustrated being so close to the summit and I have thought about trying it again. And now I have more experience of high altitude life and how to manage a lot of things.