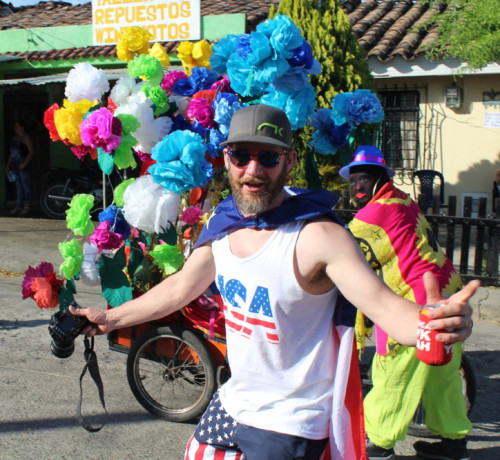 Team USA rocks the streets of Roldanillo at the opening ceremony of the Paragliding World Championships 2015. Photo: Ed Ewing

The 14th FAI Paragliding World Championships kicked off today in Roldanillo, Colombia, with a grand fiesta-style opening parade welcoming 148 pilots from 38 countries around the world.

A Colombian military marching band led the pilots through the streets before they arrived in the town square. Locals lined the route cheering them on over two hours, as temperatures peaked into the mid-30Cs.

“We’re going to have one of the best World Championships for several years I think,” Seb Ospina said. A Colombian national he’s attracted the local media’s attention as he is flying for the GB team.

“I’ve been flying here for about a month, and conditions have been really good. We’ve seen flights over 150km which is rare for here. The competition should be great.”

And Yassen Savov, former European Champion, dropped everything to make it to the competition when he was told conditions in Roldanillo have been “the best for six years.”

Despite missing his original flight from Europe and the airline misplacing his wing en route, he said he was looking forwards to the comp. “It’s the perfect place at the perfect time, good for Colombia, good for paragliding, good for us.” Yassen has borrowed a glider from Chrigel Maurer and will be able to fly in the competition, despite his missing bag.

The competition will see a practice task on Monday 12 January, with the first proper task on Tuesday 13 January.

See our Facebook page for a gallery of photos from the opening parade.