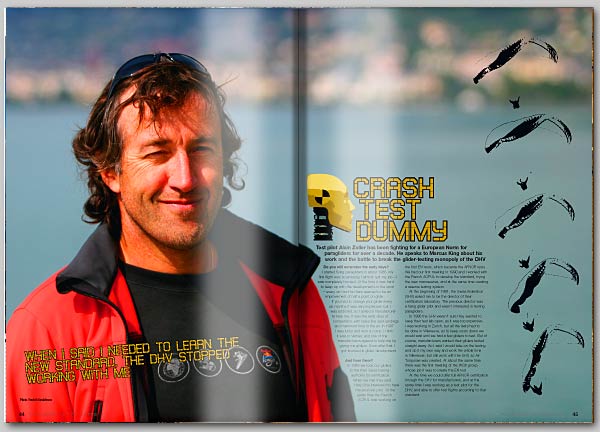 The accident, which happened at the Air Turquoise testing base at the eastern end of Lake Geneva in Switzerland, on Friday 25 November, saw Alain lose control of the glider and hit the water hard in a spiral with twisted risers.

Alain was knocked unconscious and was retrieved floating upside down in the water by his safety boat. The impact ruptured his spleen, broke his shoulder and fractured his spine.

Alain was air-lifted to hospital in Lausanne where he underwent surgery and several days in intensive care. He is expected to make a full recovery.

The new breed of top-end paraglider is to blame according to Air Turquoise’s Randi Eriksen. Alain, a test pilot of over twenty years, hadn’t thrown his reserve since the 90s, she said.

However, this was his second deployment in a month, both times on two-line gliders attempting EN D certification.

“We have come to the conclusion that we will not certify high-end performance gliders in the frame of EN standard. This kind of glider doesn’t belong in [the] EN philosophy. It doesn’t matter which brand the tested glider was. It is not only because of this accident that we wish to get out high-end performance gliders of EN standard, it could have been any of them. Also we want to point out that we have had other type of gliders in the past, where the pilots have felt black-outs and the g-force. It happens that the glider fails the tests, it is a test pilot’s job to find out the glider’s behaviour.”

The Swiss national association the SHV have backed Air Turquoise. It is also understood that the all the other testing bodies are also in agreement.

So far no two-line glider has passed certification. The Ozone Enzo and a handful of others have passed the flight tests, but “certification is only 40% flight tests” according to Randi Erikson. “The rest is legislation and strength tests,” she said, which the latest crop of wings had never completed.

In the wake of CIVL’s decision to ban uncertified paragliders from Cat 1 level competitions and now the testing bodies refusing to certify top EN D, the competition paragliding world is left bewildered. What constitutes a “top-end EN D wing” and what doesn’t has yet to be decided.

A meeting has been scheduled between manufacturers and the testing authorities for 9 December to try to define new criteria by which to test the top-end wings by.

However, with EN norms so difficult and time-consuming to change, it is unlikely that there will be a quick-fix solution that involves the EN system.

The result is that until new criteria are defined by which to build and test top-level EN D ‘comp’ wings, development of that class has all but halted.

The situation will leave pilots warming up for the comp season in the southern hemisphere and the PWC Superfinal in Mexico at a loss with what to do, other than compete on standard serial wings that already have EN D certification.

Keep an eye out for a full report in the January issue of Cross Country magazine. For those who missed it, read ‘End of the Line’ Cross Country’s exclusive 10-page report into the development of two-line racing gliders and events at the World Championships 2011 – in XC137 (paywall; also published in Swiss Glider magazine).