The El Hierro Paragliding Festival celebrated its 25th edition over the weekend of 30 May to 2 June. Andy Pag went along for the first time…

From the landing field on the small island of El Heirro you’re surrounded on three sides by a 1,000m high volcanic crescent wall, stretching from the Atlantic ocean on one side, all around you back to the sea. The island may be small, but the geography is big, and this black granite crucible provided the perfect auditorium for this year’s Concentration Internacional de Parapente Isla de El Hierro, a paragliding festival in the most westerly point of Europe, the Canary Islands.

You have to want to get here. Although transportation links to the island are getting easier, there are still no direct flights or ferries from the mainland, and this year the festival coincided with Spain’s other big annual paragliding event, El Yelmo. None the less, over 150 pilots enlisted for the event, and it’s easy to see the attraction. The approach is in keeping with island life: small and intimate. The whole event has the feel of a family reunion, starting at the sign-in desk dispensing generous goody bags along with welcome bessos (kisses) to old friends. By day two even newcomers had become old friends. 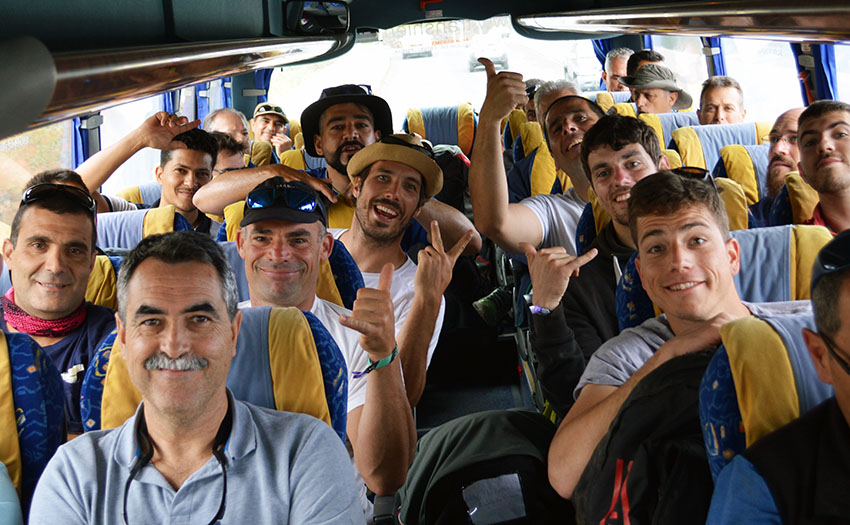 From any of the four take-offs you see the whole aerial playground laid out before you. What it lacks in XC distance, it makes up with imposing vertical faces and picture-postcard views of the ocean. Living on an island this small gives you a confidence you can shape your world, and the festival organisers did just that for the visiting pilots. During the festival the main road linking the southern-most town is temporarily closed, to allow wings to be laid out on the tarmac at the narrow steep 800m launch. The 1,100m take off, by contrast, is wide and long enough hangies to set up, and for four gliders to launch at the same time. 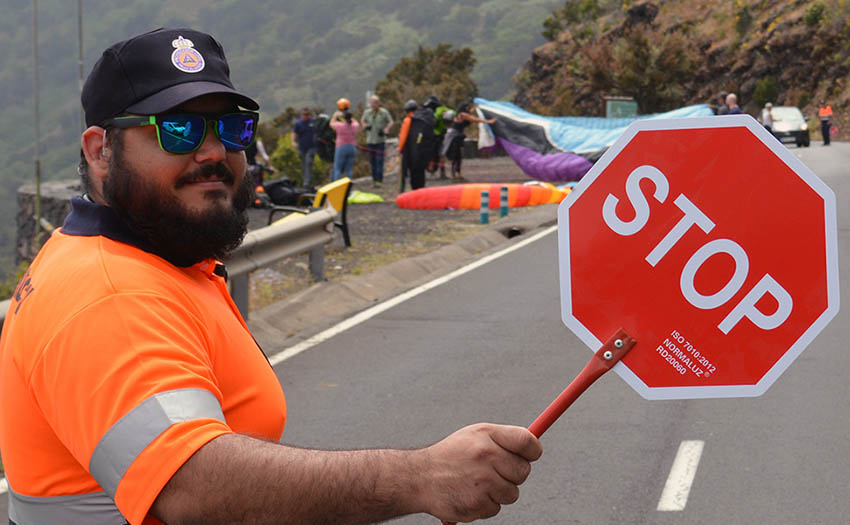 Everything stops for the flying on El Hierro. Photo: Andy Pag

Renán Morale, half of the Canarias Acro Team and the vice president of the local club, says the long weekend is just about bringing friends together. “Yes, there’s an XC distance competition, but it’s for bragging rights and banter more than the modest prize. It gives the XC pilots a chance to flap their wings. There’s an awards ceremony but no one minds who wins.” For the record, Antonio Perez won the day, flying a 35km FAI triangle on an Ozone Zeno. 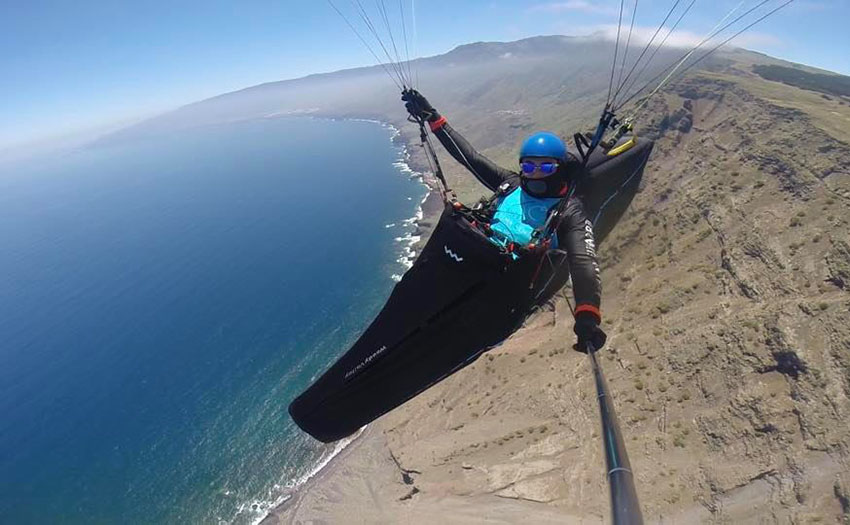 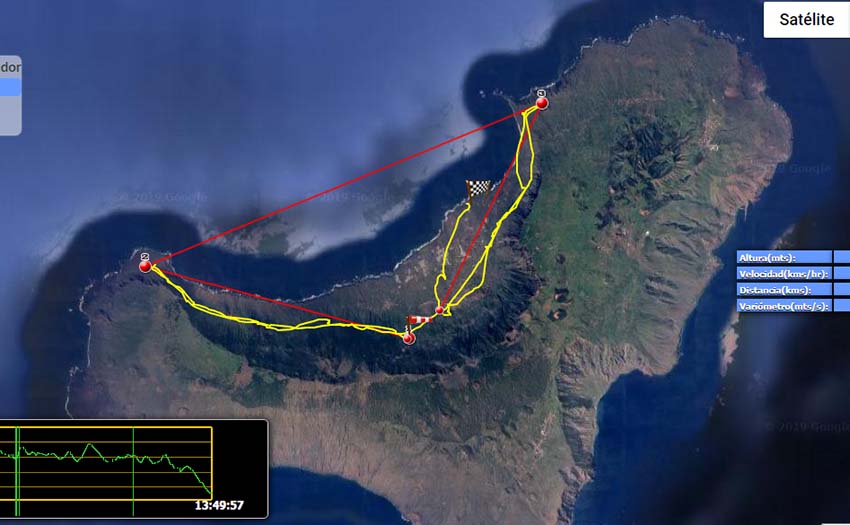 The landing had been extended this year, but there’s still a bite of midday thermal activity that makes the spot-landing competition hard to nail. “No one cares who wins that either,” grins another of the organisers as kids run past dragging home made kites en-route for the bouncy castle. In the end the dozen pilots that hit the landing mat were all crowned a winners, as the organisers had more prizes than they know what to do with. 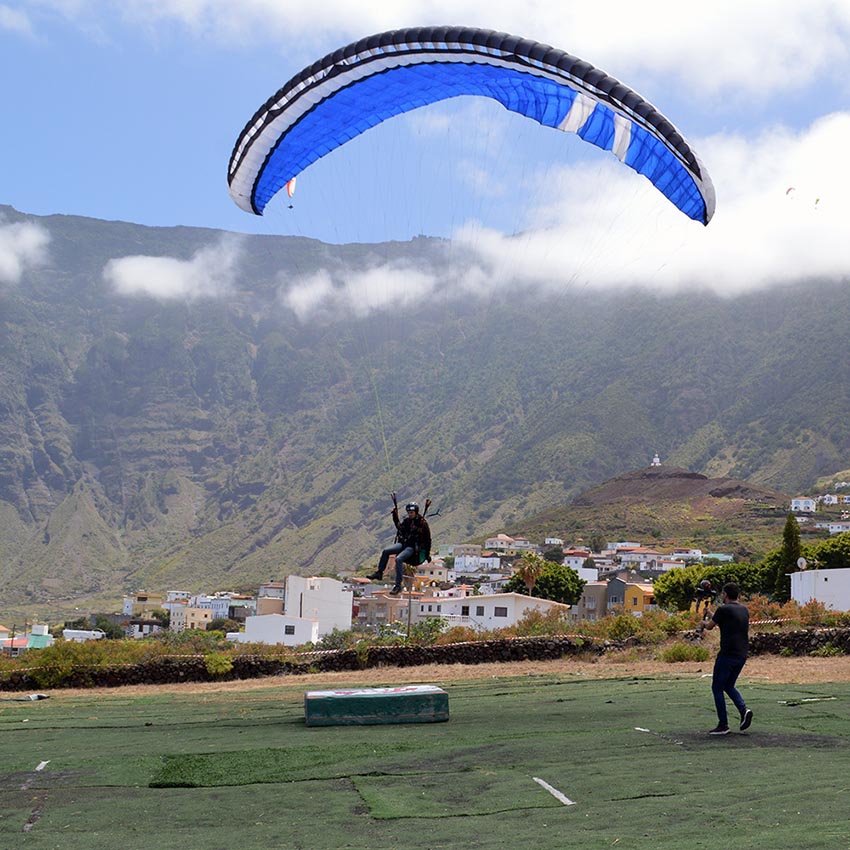 Morale and his acro partner Juan Luis Morales are among the half dozen acro pilots performing exhibition flights. The trade winds and steep slope make this a great year-round destination for acro training and the two locals are part of the Spanish acro team.

For all the life-control island living gives you, the weather is still the boss. The fits of Calima wind that hurl dry dust from the Sahara and shut down flying have become more frequent in recent years. They set up Von Karman votexes as the wind whips around the sides of the island rather than over the top. They look amazing on satellite pictures but are not so charming when you’re caught in the storm that comes with them. 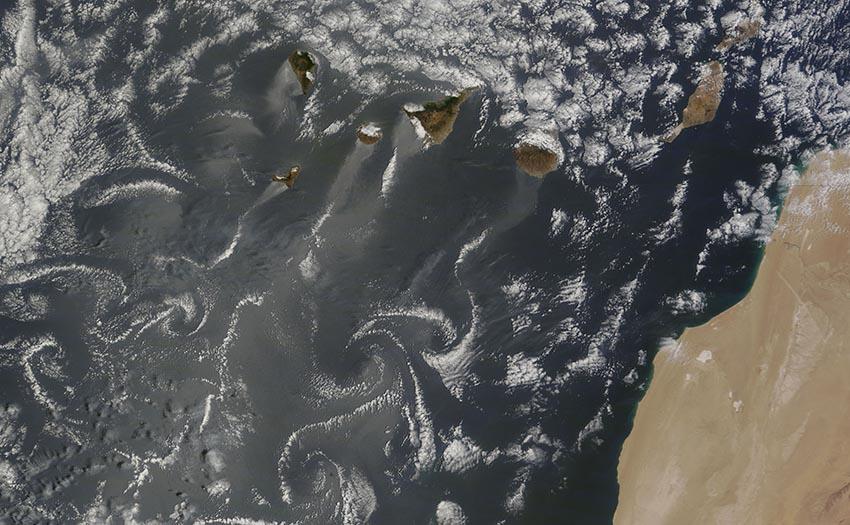 Von Karmen vortices downwind of the Canary Islands. El Hierro is the smallest and most southerly. Photo: NASA

For the festival weekend though the wind was uncharacteristically calm. Overcast at times, the high winds and turbulent thermals usual for June didn’t materialise, making for relaxed boaty flights, with time to take pictures and worry if you’ve applied enough sun cream.

Sinking through a sheet of morning layer cloud into the unknown is signature flight of the Canaries. Well timed shuttles mean pilots cranked out up to four flights a day if they weren’t distracted by a swim in the rock pools or a hike through the pineapple fields. Next year the organisers plan to move the festival to October to guarantee this easier weather for the El Hierro festival family.

Find out more about flying in El Hierro at