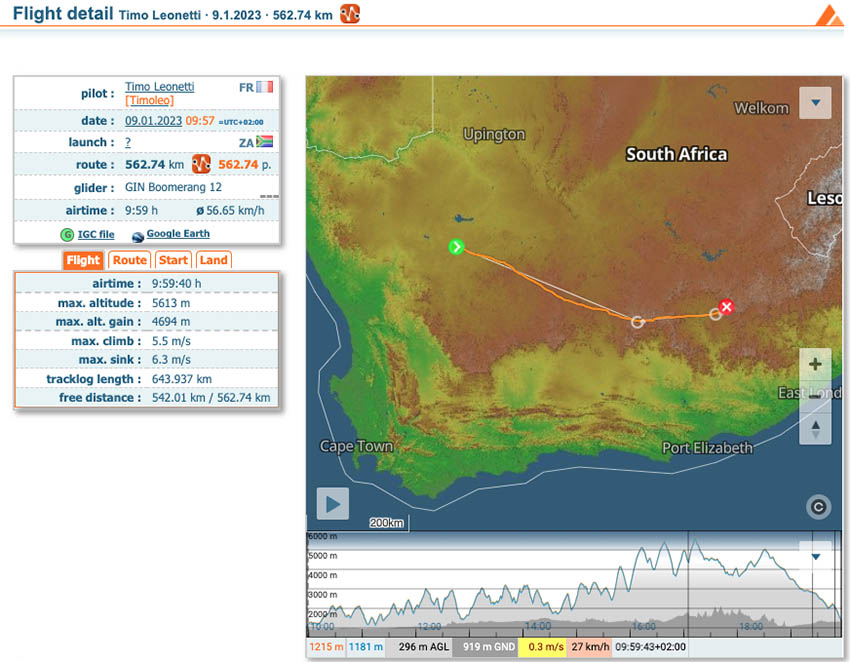 The flights will not count as South African records as both pilots flew into airspace, but it’s the first time the 500km mark has been broken in South Africa since Nevil Hulett set the world record there 14 years ago. Back then Hulett became the first person ever to fly 500km on a paraglider when he flew 502.9km on 14 December 2008. He covered the distance in 7h39m, averaging 73.3km/h and hitting a maximum speed of 126.7km/h. Conditions were extreme with very strong wind and turbulence.

After that, the hunt for world records moved to Brazil, where the 500km mark is now broken at least once a season in the northeast. The new target for record hunters is also now more than 600km – and that target was hit on 20 June 2021 in Texas, USA, by Sebastien Kayrouz. He now holds the official paragliding world record at exactly 610km.

Now, the search for record distance has turned back to South Africa, where Clément is convinced 600km+ flights are possible across the Karoo desert. Two days after their big 500km flights Cross Country Magazine’s Ed Ewing spoke to the pilots on a very weak wi-fi connection to find out more.

Clément, Timo, how is South Africa?
Clément: South Africa is amazing, the Karoo is quite difficult to fly. I have never flown anything like here before.

Who is there with you, who is on the team?
There are three of us. Me [Clément Latour], Damien Lacaze and Timo Leonetti. Timo came with his parents who are retrieving and doing logistics. And we have Mike, a local pilot we hired for the trip who is in charge of logistics and winching.

Whose idea was it? It is more than 10 years since anyone chased paragliding world records in South Africa.
I have been planning this trip for years. After being in Brazil two times in a row, I wanted try a different place. I have looked at Nevil Hulett’s s tracklog for years. Ten years ago in La Réunion island I met Nevil and he gave a talk about his world record flight and I have always had that in the back of my mind.

So, 18 months ago I looked again at the track, and started to talk to pilots who had flown in the Karoo. And all of them came with the feedback that it’s most likely possible to fly 600km, some of them say 700km, in the Karoo. I wanted to come last year, but Covid meant I couldn’t. This year I was planning it for December and January, and Damien was motivated, and we found out that Timo also wanted to come to South Africa.

How long have you been there?
I arrived 27 December. I had one week of sightseeing. Damien arrived on 3 January and so we started then. Timo arrived on 8 January, so actually he flew just after arriving in Brandvlei. He made it to the airfield, opened his glider and took off.

For your 500km flights you towed up from a tiny airstrip in Brandvlei in the Northern Cape. What is Brandvlei like?
You see where there is Nowhere? And the Middle of Nowhere? Brandvlei is somewhere between the two. There is one restaurant, which closes at 7pm. One liquor store. And we have electricity 12 hours a day, and wi-fi 12 hours a day.

It is very dusty, very dry. And there is a dirt road and a small airfield so we can take off from there. We came here because people have flown from here in the past and because it is far enough west so that we can fly 600km before reaching Lesotho.

Nevil landed in Lesotho at the end of his big flight. Was he flying further north?
Nevil landed in Lesotho, yes. He started from further north. He had a west wind and flew in almost a straight line. But he took off late in the morning because he had some winch issues, and he had this incredible average speed, like 70km/h. Looking at that tracklog, we thought we could certainly take off earlier, which we did, and we could certainly land later, which we also did. So we don’t have that crazy average speed that Nevil had, but we stayed longer in the air. At the time Nevil also had the clearance for the airspace corridors, which we didn’t manage to get so far.

There are three Class A airspace corridors (FL145) along the route which you have to fly under. Depending on the QNH (air pressure) you need to stay below about 4,500m. But on your big flights you both bust airspace crossing corridors. What happened?
Clément: I have been trying to sort out clearance for the airspace for weeks now. In the past, pilots could get clearance by radio contact and some sailplane clubs used to get clearance on good days. But it seems it’s not possible anymore – you need a transponder to go through these corridors. Although we had made all paperwork in the morning, we knew while flying that we were too slow for a world record, and so I went through the airspace. There is very little traffic in this area and my hope is that if we have better days, we’ll pass below it.

Timo: The airspace ceiling depends on the QNH. On our flight it was around 4,500m. It was complicated because [thermals are strong], cloudbase was much higher and it is hard to respect that. During the day the wind was very strong on the ground with few safe landing places and high cloudbase. We knew we could not get the 620k or make a world record with the average speed we had, and so I went through the corridors maintaining a good safety over the ground and knowing that there is very, very little traffic in these zones. I know that a lot of pilots are following and now asking questions about airspace. I apologise for that and hope that it will not get too much noise or problems with the community. Next time we will try to pass below it. If we want to get the world record, of course we must respect the airspace.

Clément: We were advised to bring oxygen. But it is tricky at the customs. You have to come with empty bottles, then you need to fill them here and so on. So we decided we would fly without it.

How long will you be there trying for records?
Clément: Damien and I will be here until the 17th. Timo will leave on the 22nd/23rd.

The goal is 620km, the world record?
Clément: I think 611km will be enough! Tomorrow looks windy, perhaps too windy. Today we will move, drive 150km north to find another launch place, so we can fly south-south-east. If we start here from Brandvlei we will be too far south. The thermal conditions look ok for tomorrow [Thursday 12 Jan] but the wind looks too strong. Strong gusts are forecast for the ground. It looks like a tricky day. Flyable but probably not landable for a few hours because of the wind on the ground.

The problem is in the middle of the day it gets too windy and you have to stay in the air?
Clément: Three days ago Damien and I were flying, and we landed at 2pm to make the retrieve easier. I landed in 10km/h wind but by the time I had packed the wind was gusting [very strongly]. The thermals are huge, there are a lot of dust devils on the ground and when the thermals are coming it is pumping so much that you have very big gusts. So even on a weak wind day, in the gusts it can be very tricky to land. On a strong-wind day plus gusts, plus thermals, you don’t know what to expect on the ground. It can be too much to land safely during the day.

What is the earliest you can take off? In Brazil pilots experimented with launching earlier and earlier until now they regularly fly thermals at 8am.
Damien: On the first days we tried to winch at 9am and we did lots of rotations until it started to work at 9.50am. The first thermals start around 10am. Two days ago Timo launched at 9.50am.

How do you decide who launches first?
Clément: Two days ago Timo launched first, then Damien launched, then I launched but I had a line break so I had to land and relaunch – about 40 minutes turnaround.

One of the reasons South Africa has often been overlooked for 600km flights is because of the sea breeze that comes in from the southeast each day, which means pilots can hit a headwind at the end of the day. Are you worried about that?
Clément: Yes, of course, the sea breeze comes in about 300km inland. It is one of the reasons we are moving north tomorrow, to start as far north as possible. For the record, we are in touch daily with Nevil Hulett. He is fully motivated for us and is following us and has advice. We gave him our plan for tomorrow and he has had it validated by his weather forecast man. He is motivated to see pilots coming here to fly far and to try to get the world record!

Good luck with the rest of your trip!
Thank you!