MOST MANUFACTURERS have at least two wings spanning the EN B class, with some having as many as six (hello, UP!). So what sort of EN B is the Leaf? Pierre-Yves Alloix, Sup’Air’s designer, was with me on my first day with the wing. “It’s a ‘proper’ EN B,” he said. “We wanted to create a wing that sits firmly in the middle of the range. A wing that talented beginners can buy out of school that will last them for a long time.”

Sup’Air need little in the way of introduction. They have been making harnesses for many years. They’ve only recently branched out into making wings. Their first wing was the Sora tandem in 2014, soon joined by the Eona (certified EN A, funnily enough!) and the lightweight Eiko last year.

Pierre-Yves used to work at Airwave with Bruce Goldsmith before setting up his own company Escape. He now has a large team of test pilots at his disposal, including some of Annecy’s best acroheads. Since their early days, Sup’Air have had a philosophy of making sure products are just right before they are released. Once the test team are happy with a product they send them to selected pilots to fly over an extended period to get feedback. Manager JC Skiera told me, “We never rush anything to the market.”

Construction
Looking at the wing this philosophy is evident: everything is well finished. The wing has a relatively low flat aspect ratio of 5.4, slightly higher than Nova’s Ion 4 (5.14) and Ozone’s Buzz Z5 (5.16).

Made from 38g/m² Skytex on the top and 32g/m² on the bottom the wing is relatively light coming in at just under 5kg for the medium size. One feature on the sail design worth a mention is the mini ribs at the back of the wing. These use internal seams so are completely smooth on the outside. This should not only help improve performance but also stop the stitching catching on rocks etc on take-off. 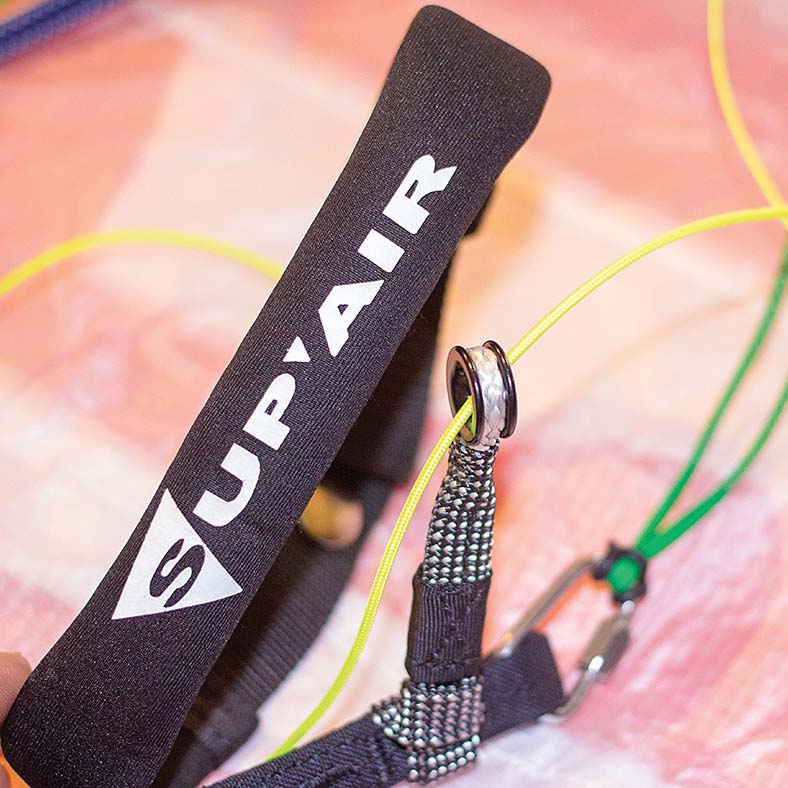 The line-set is fully sheathed, making it easy to sort out on launch. The lines and risers are colour coded so you can easily see the As and Bs. These little touches make living with the wing easier, especially for newer pilots. When asked why they hadn’t used any unsheathed lines Pierre-Yves said they wanted to create a wing that performed well, “but not at the expense of usability and strength. We wanted to make a wing that would last you well.”

The risers are well designed with a wider section where you clip-in meaning they won’t slip around on the karabiner like some narrow ones do. The risers themselves are fairly racy and the speed system uses good quality Ronstan pulleys.

The brakes are nice and big with a well-padded, comfortable neoprene handle. They make use of ceramic rings instead of pulleys, these are on a small webbing attachment that is easily removable so you can replace if necessary, another sign this wing is designed to last.

On the ground
As we walked up the hill, Sup’Air pilot Benoit Outters quietly told me that Pierre-Yves “doesn’t like walking”. This was soon confirmed as he turned off to his own ‘secret’ take-off barely a third of the way up to the official launch. We climbed a short steep rise to find a sloping grass area surrounded by trees and rocks. To make things worse the track cutting across the hillside below meant there wasn’t much airflow across the area. It would be a test of my groundhandling and the behaviour of the wing.

I had no need to worry. When encouraged the wing caught what air there was and filled smoothly as it rose above my head to sit steadily. Pushing off, it glided easily into the lift band. It was behaviour I repeatedly found on launch: easy inflation, a smooth climb and no overshooting tendency. If it does roll off to one side it is very easy to bring back overhead by applying some pressure to one riser or braking and stepping under the wing.

In the air
As soon as you are in the air you will discover the fun side of the Leaf. It has a nice amount of roll and the brakes are fairly quick-acting. The wing retains a good amount of energy, making it fun to throw around – similar to the Ion 4. The brake travel is probably not quite as long as the Ion 4 but the stall point is deep and predictable: I was able to slow the wing down well when making top landings on a thermic day. The wing seems to be tolerant of the odd timing mistake.

Talk of energy may worry some newer pilots, but while the wing retains its energy well it is very settled and, especially in pitch, nicely damped. Feedback about the air is well filtered for a comfortable ride. I said to a friend if I was being picky I would like a bit more information, but when thinking about the pilots this is aimed at I think they have it about right: enough information to help you feel the lift; but not a shouty wing that will leave you very quickly fatigued in big air.

When thermalling in stronger climbs it is easy to use the roll authority to bank over and turn tightly. The wing remains solid and even with some deliberate missing of the core (well that’s my story and I’m sticking to it), the Leaf soaked up the turbulence well. During my time with the wing I had the chance to take it on a 100km flight through the southern French Alps, passing the infamous Tête de l’Estrop. With a cloudbase that wasn’t that high it meant jumping onto the main cliffs of this impressive piece of rock. Banked over, the wing gave a reassuring feeling of security as I climbed close to the rock walls.

We don’t really do weak thermals in the south of France at this time of year but in lighter lift I felt a gentler touch was needed to stop it banking over. But, with finesse the wing can be turned reasonably flat and the energy in the wing facilitates making use of the better cores. Flying at about 101kg in the weight range that goes to 105kg I found the Leaf climbed well against other wings, and I was able to climb out on our local hill a few times when other pilots were stuck soaring at take-off height.

On glide
Taking the wing out for an early morning glide to do speed tests I found a trim speed of about 36km/h on the TAS. It was noticeable that even at this time in the morning the speed displayed was fluctuating a bit, as the wing was moving about.

It was a different story on full bar. Pulley to pulley the Leaf reached a steady top speed of 46km/h which puts it up with some of the high-end Bs. More importantly this figure hardly fluctuated, showing how the wing was cutting through any turbulence well. It felt nice and solid with the bar fully extended.
On my cross-country flight I found the speed was fully usable too.

At half-bar the wing is very stable and drives on nicely cutting through the turbulence; it reminds me of the Niviuk Ikuma in this respect. The bar pressure is a bit higher than some higher-class wings but gives you that nice solid feel. It feels more settled on half-bar than it does at trim, encouraging you to push on – the sign of a good glider.

When getting close to the clouds as I did on several occasions, adding big ears is easy and efficient, and combined with the bar gets you away from the cloud suck quickly. Once released the ears re-inflate on their own very quickly. 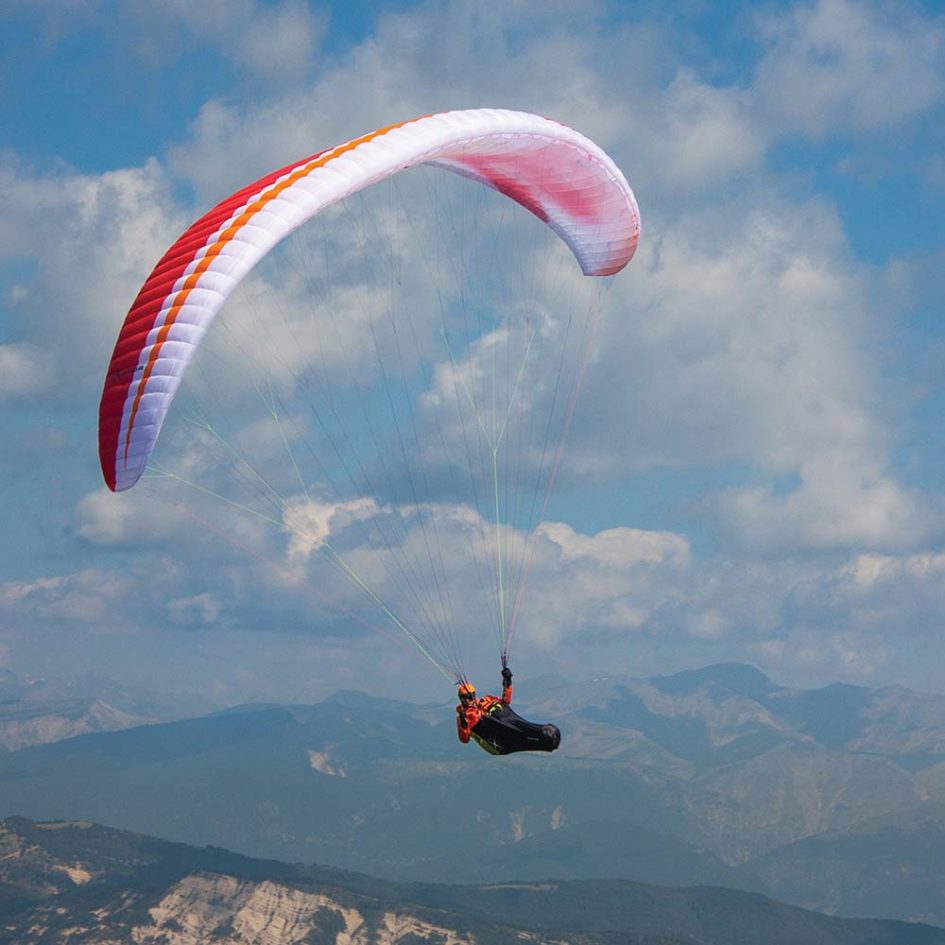 Stability
I tried a few simulated collapses. The nose feels very solid and it takes a good hard pull to get it to collapse properly. If you are half hearted only the leading edge really comes down.

When collapsed the behaviour is as you would expect from a mid EN B wing with a quick re-inflation and no drama. The solid nature of the leading edge showed: during my 20 hours or so on the wing I don’t think I had a single wingtip rustle let alone a full collapse, despite some strong conditions.

At the end of my 100km flight, I just failed to connect with a ridge and found myself landing in a strong valley wind. The area had few landings thanks to quite a few power lines and trees. If I had been on a higher-level wing this would have been quite a demanding situation. Being tired after a long flight is often when accidents can happen but the Leaf’s stability and calmness meant I was able to pick my landing, work my way over to it using a bit of bar as necessary, and land without drama.

Conclusion
The Leaf joins a very busy market with some great wings to compete with, but it is certainly capable of mixing it with the contenders in its class, such as the Buzz Z5 and Ion 4.

On the ground it’s as easy as anyone would wish with easy inflation combined with school glider behaviour. In the air it has easy thermalling and a solid stable feel with just enough energy thrown in to give it that fun factor.

It’s not a shouty child of a wing but gives you the information you need to make the most of climbs in a gentle manner. For the intended market this has to be good when new pilots already have enough to contend with.

This is all combined with confident cross-country performance that will grow with you. The Leaf’s stable feel on the bar as it cuts through the bumps will encourage you to make use of this important part of a wing’s range as you progress into longer flights.

For pilots out of school and with a few hours under their belts this will make a great wing to progress on. Sup’Air have designed it to last and it has the performance and the fun factor that will make you want to keep it for a few seasons.

Of course it would also make a good wing for those weekend warriors who find they just don’t fly as much as they used to and want something that still has performance but is safe and stable. It certainly left me with a good feeling.

Marcus King flew the Sup’Air Leaf M at an all-up weight of 103-105kg with an Advance Impress 3 and a Sup’Air Strike harness. in the southern Alps.