Hannes Papesh has to be one of the better-known designers in the paragliding industry. Over the years he has built up a formidable reputation, especially when it comes to pushing the boundaries of EN classes.

He designed the Nova Mentor 2, which brought new levels of performance to the EN-B class. At the time in 2010 he made bold claims that it could hold its own against an EN-D wing in a calm-air glide.

When challenged on the forums Hannes put his money where his mouth was and agreed to a glide contest againt the Advance Omega 8 (EN D) at the Coupe Icare; a challenge that famously vindicated his claims. The Mentor series never looked back. 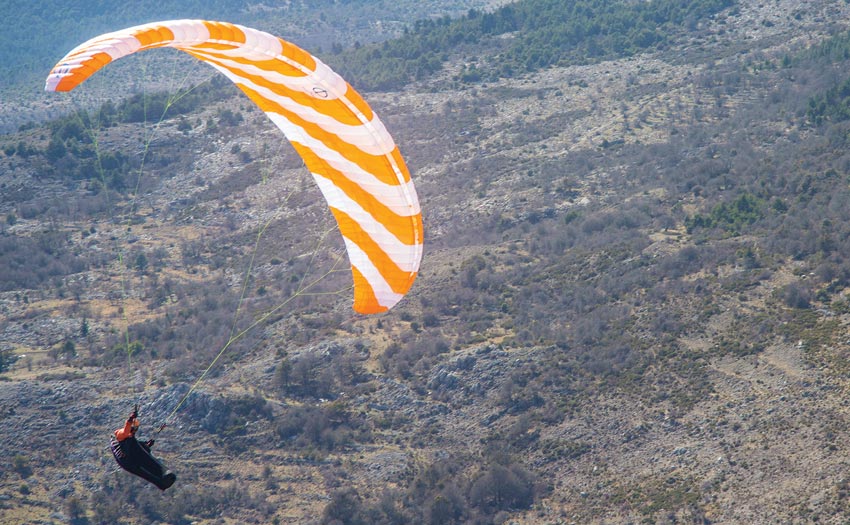 The wing has 50 cells and an aspect ratio of 5.14 – that’s a lot of cells for an EN-A. It also features a mild sharknose and diagonal 3D shaping. The result is a very smooth looking leading edge. Photos: Charlie King

Hannes has since left Nova, the company he helped form back in the late 1980s. After a spell at Advance he has now created a new company, Phi. He is working alongside Peter Mack, who previously ran Nova’s Hungarian production, Mike Küng the well-known test pilot, and Benni Hörburger, former designer and test pilot at Icaro. Silvia Hobohm is the face customers will see and the voice they will deal with.

Unusually, Phi have started their range with three EN-A wings. The Symphonia is the first to be released and has been designed to sit right at the top of the EN A-window, promising “EN A with mid-B performance”.

Hannes explained that because the low-B class is something that has been created by the industry (an EN-B is an EN-B, wherther it is low or high) they wanted to place the Symphonia in the A class to have a clear statement of its level of safety. “The Symphonia is a kind of technology demonstration – what can be done in the A-class,” he said. “So much performance and fun to fly are new in that class.”

I flew the wing over several flights in nicely thermic conditions in the south of France. 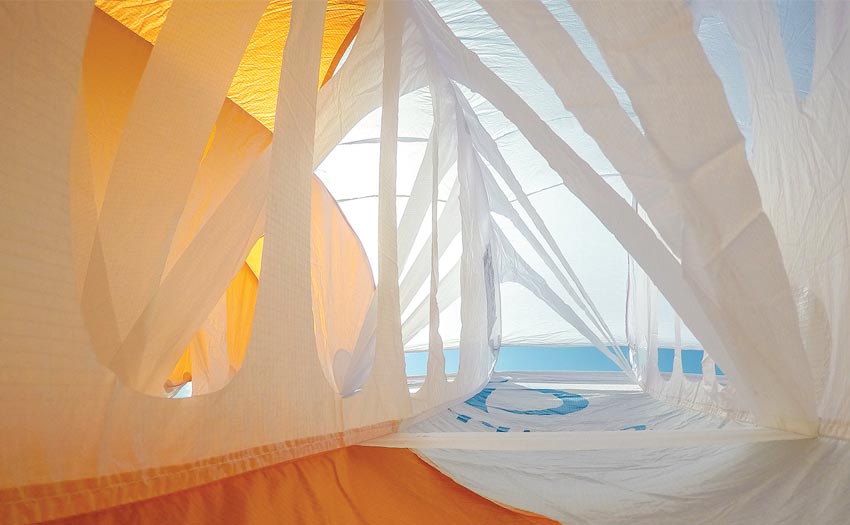 It’s made from Porcher Skytex 32 cloth. This is a relatively light cloth, but has better longevity than the still lighter 27 cloth. Hannes has described this as a “luxury” cloth.

The most obvious construction feature when you unroll the wing is the lack of main lines – there are just two A-lines on each side. This level of line optimisation is normally found on higher-class wings and the first sign that this isn’t a ‘normal’ EN-A.

Achieving this has required a complex internal structure, which is obvious if you take a peek inside the cells. The lightweight material keeps the overall weight below 5kg for the 24, which is actually 28m2 flat. 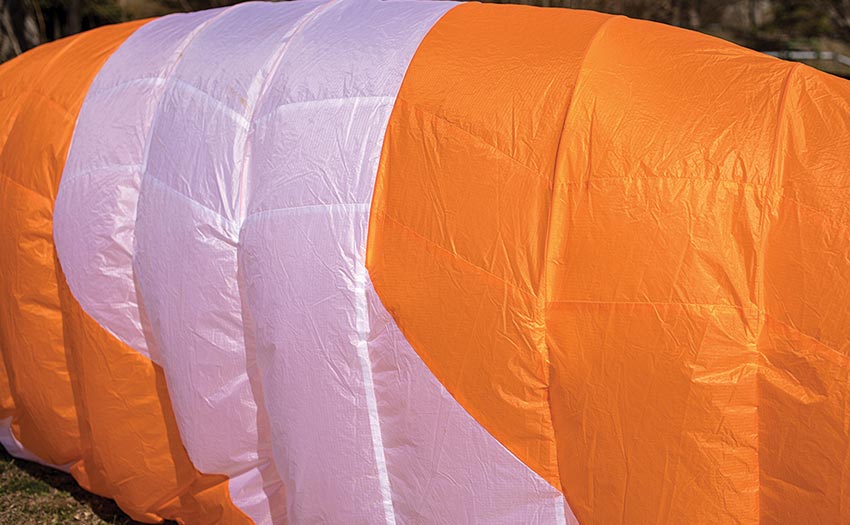 The leading edge uses a diagonal 3D cut with two seams zig-zagging across the top surface. This is the same technology used on some of the latest Advance wings. There is also a mild sharknose with only one plastic rod used in each cell to keep the shaping. However, the result is a very smooth leading edge that certainly looks the business.

The main lines are sheathed but pretty thin for this class of wing, a hint that it isn’t probably destined for endless groundhandling sessions. The upper galleries are unsheathed.

The risers are nice sleek and simple affairs. This is a three liner but with D-tabs, and has three risers each side. The A-riser is split with just one line coming off each.

The brakes are held on by magnetic clips, and are comfortable but maybe a bit soft for some pilots’ liking. All in all this is a well made wing with the quality manufacturing you would expect from any mainstream brand. 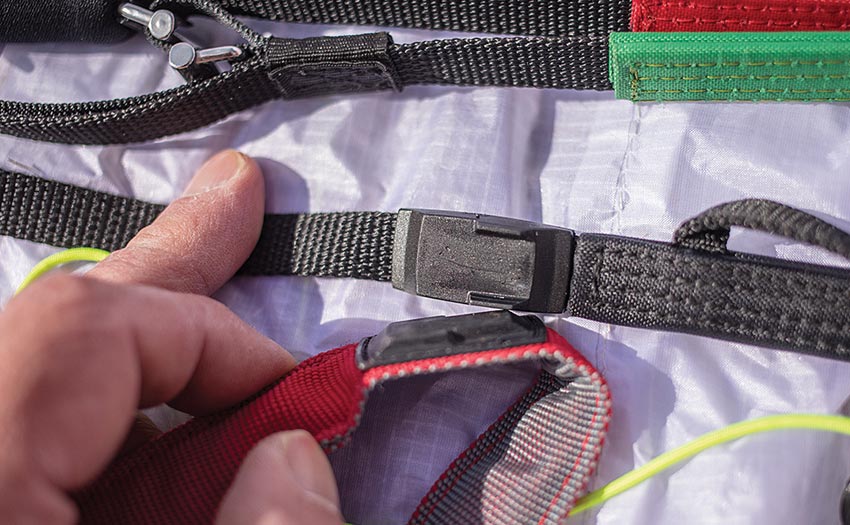 On launch this wing is super simple. It comes up cleanly and easily with little pressure needed on the risers. Once up it sits overhead happily with the smallest of touch on the brakes as it feels like it wants to fly. It’s easy to kite on the ground and doesn’t fall back easily.

In the air this wing is a delight for its class – it only takes a small amount of brake to induce a turn. It feels precise and agile and turning into thermals with it I was immediately impressed with the way it settled into them. There isn’t excessive roll as exhibited by some low-B wings, but if you want it you can add in some extra brake and weightshift to crank it up.

The brake pressure is middle of the range: not so light you don’t feel a connection but not so heavy you will be tired after an hour or so in the air. The range is probably near the border for an A, another indication this wing isn’t destined for the ab-initio pilot. Having said that, it did require a wrap to stall on a windy launch.

It’s a really easy wing to fly and gives a comfortable ride with no big pitching or roll and yaw movements. This is not to say it is a dead wing – it gives a nice level of feedback. I felt nicely in contact with the tips and able to feel out the lift.

Flying upwind the wing doesn’t get knocked back and climbs into lift nicely. It doesn’t have the driven feel of some high-end Bs but it certainly feels like it rides up and into the lift rather than being pushed back. I had several thermic flights on the wing flying at a couple of kilos over the mid-point of the weight range and it always seemed to do well compared with the wings around me. 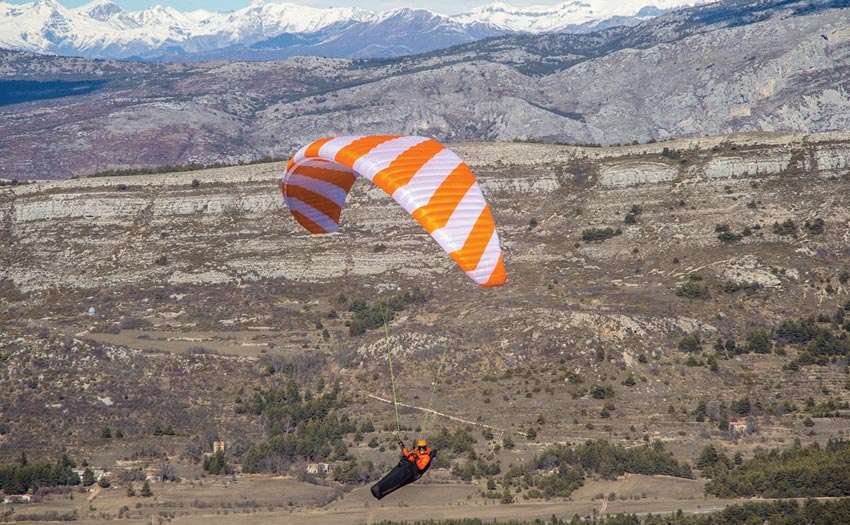 The Symphonia really does seem to have all the flyability and performance of the best mid-B wings, but with extra passive safety. It thermals and handles nicely and has a good speed range of 35-47km/h. That makes it a very usable XC wing.

On glide the bar is easy to use without too much pressure. For an EN-A I was surprised at just how much acceleration it provided, as I had assumed this would be where the compromise might show.

Reaching for the TAS speed probe I set out to get some measurements on glide. Trim speed comes out at a pretty respectable 35km/h, which is what I had expected from what I had seen on the GPS speeds.

Pushing the bar with my tippy-toes to get the pulleys overlapping I managed to get a TAS reading of 47km/h. That puts it up with many of the EN-B wings, including some of the high-end ones. It’s also all nicely usable; I flew through thermals on full-bar and the wing felt settled with no untoward pitching. I was able to steer with the back risers but as they are not connected to the Bs it is probably not advisable to put too much input in as that can crease the wing.

With the split-As Big Ears are easy to pull in. As there are only two lines they are pretty big and give a good extra sink-rate. Once in they are stable both when off and on the bar. When released they roll out on their own after a small delay, of course this can be speeded up with a quick pump.

Stabilty-wise it seems well pressured. I flew in conditions that some described as “Spring-like” and a day with strong wind chopping everything up, and I didn’t have a single collapse. Pulling on the A-risers, the wing felt nice and solid and the couple of collapses I pulled came out cleanly and quickly with very little course deviation. All very relaxed as you would hope from an EN-A. 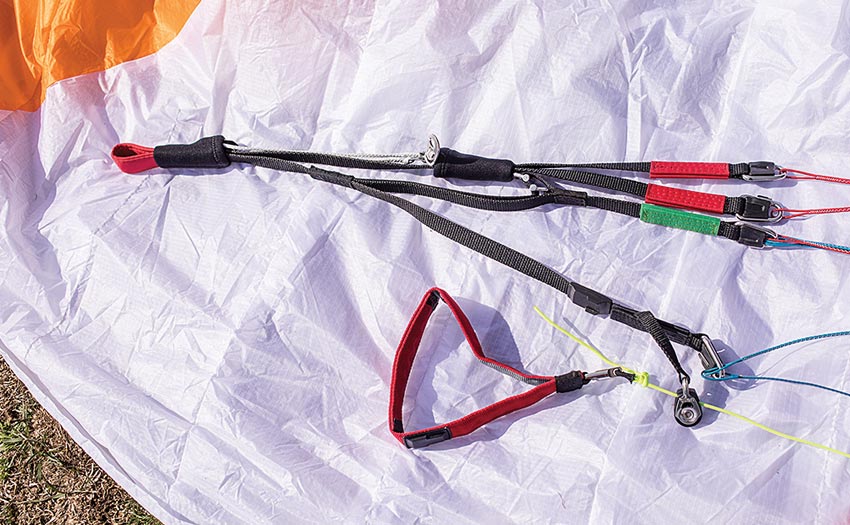 I asked Hannes if there were any particular compromises he had to make to get the wing through as an A? He said, “No, that was always our goal so we designed it that way. We didn’t want to castrate it by slowing the trimming or using more angle of attack at the tips.

“One of the keys was using lighter material along with a safe aerofoil and wing curve that offers good collapse safety and importantly a safe deep spiral – this is a critical manoeuvre for low-level wings.”

Hannes set about creating a wing that has good performance and feeling with EN-A safety. The Symphonia certainly delivers on this.

When I reviewed the Mentor 2 there was much talk of its performance but in my view the handling was just as special. With the Symphonia Hannes has repeated the same trick, providing great performance but also refined and agile handling for the class.

But who is the wing for? On the one hand it feels very easy to fly and some may think as it is an EN-A it is a first wing. I’m not sure. Of course a talented beginner could fly it quite happily, but personally I think it fits more into second wing cross-country beginner territory. It has all the flyability of the best Mid-B wings and the performance to match with added passive safety. 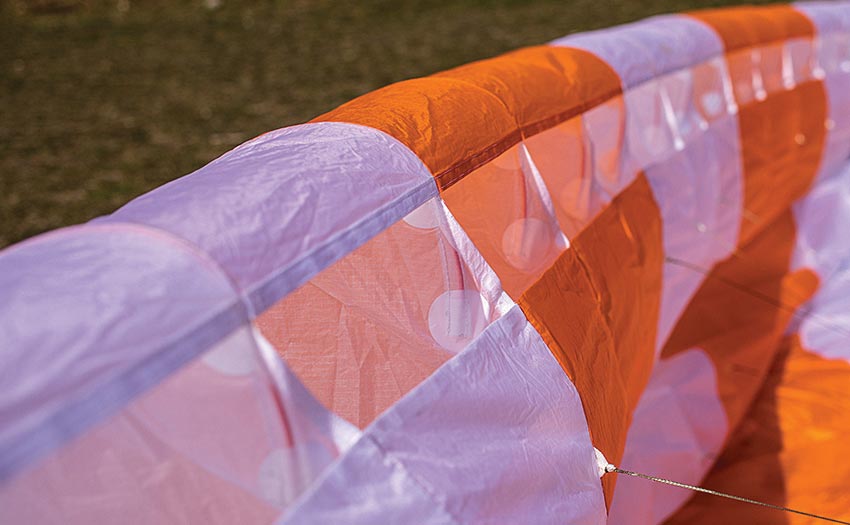 I think this is a wing for cross-country flying and extending your skill set; it will reward your flying. It’s a wing that goes beyond the simple single letter of its certification, a wing that fits what the designer set out to create.

In fact it’s a wing that has made me really think about what I actually need to enjoy my flying. Unless I am flying comps do I really need anything more? It also bodes well for the High-B project that I am sure many pilots are waiting for: as Hannes says, “High-B is my special discipline.”

Marcus King regularly reviews EN-B and EN-C wings for Cross Country. Cross Country’s designer, he has been flying paragliders for 25 years. He lives in the south of France where his home sites include Gréolières and Gourdon.