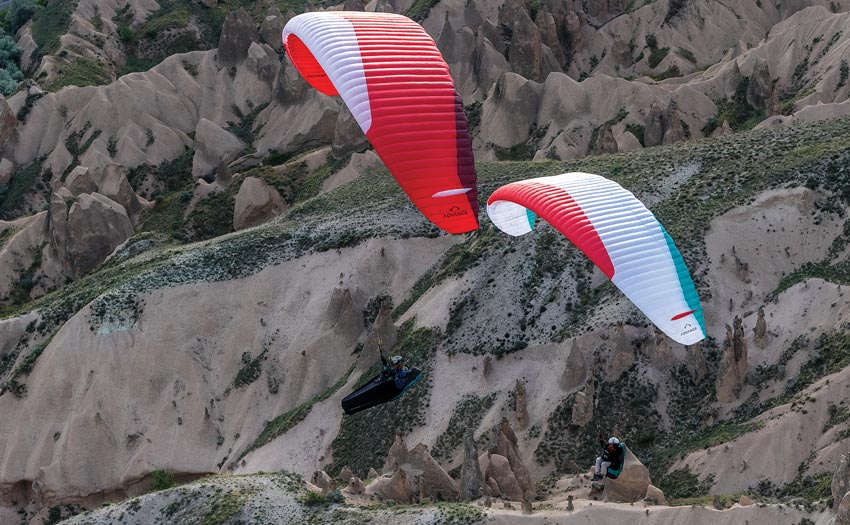 Close Cousins: The Iota 2 (red) and the Xi side by side in Turkey. Photo: Andy Busslinger

Ed Ewing flies this lightweight EN B from the Swiss gurus

I’ve been a fan of lightweight paragliders since the first Ozone Geo came out 15 years ago. Developed after Ozone designer Dav Dagault had competed in the first Red Bull X-Alps in 2003 (he came second and was one of only three out of the 17 pilots who took part to make it to Monaco), it was designed as a “specialist wing” for travel and adventure flying. The large size (my size) weighed 4.9kg; for comparison, the Geo was based on the Buzz, which weighed 6.2kg for the equivalent size.

Paired with a lightweight, reversible harness I flew that glider literally over the mountain and far away, landing in valleys with no roads and not caring because walking out was so easy with such a lightweight pack. The same for travelling: touring Mexico with a lightweight wing was just so much easier than lugging a full-size glider and harness around.

It was a revolutionary glider, sparking a whole new genre of wings, which in turn contributed so much to the whole concept of hike-and-fly. Pilots then decided they didn’t only want light weight, they wanted performance too: and the market delivered, big time.

Now, every manufacturer has a dedicated lightweight wing that can be flown XC, and lightweight materials and concepts are standard issue in many wings. 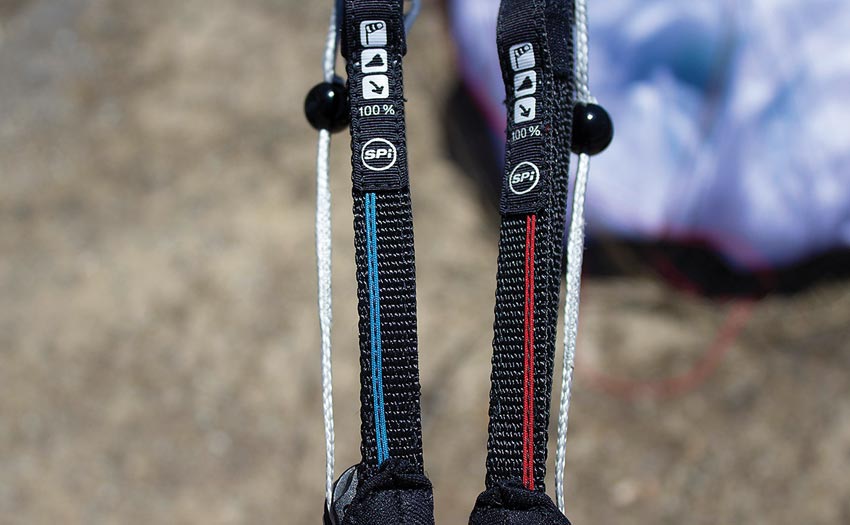 An upper-B it’s already proven itself as a very competent XC wing: the Advance website features stories from pilots flying the Xi on 200km flights in the Alps, across Mongolia, through the Indian Himalaya and adventure racing in the Bernese Oberland.

Last summer Advance’s chief test pilot and founder of the Chillout Paragliding school in Interlaken, Kari Eisenhut was grinning like a brand new pilot when he told me about a 560km vol-biv trip he’d completed on the first serial Xi, flying from Laragne in the southern French Alps to Austria over three days. He flew the entire way, linking together four flights without even taking “a single hiking step”!

The wing is based on the very popular Iota 2 (EN B), with the same aspect ratio (5.6) and very similar cell count (57 versus the Iota 2’s 59). The Iota 2 has proven credentials as an excellent, safe XC wing and is now somewhat of a benchmark in its class.

Performance-wise Advance say the two wings are pretty much identical, and are for the same sort of pilot. That is, someone who as a minimum flies thermals, flies actively and is at least starting to fly XC.

Compared with the Iota 2 the Xi uses lighter materials (a mix of Porcher Skytex 27 and 32), unsheathed lines, softlinks instead of maillons, and internal work to save weight on the diagonals. The result is the wing weighs 3.4kg (21) to 4.3kg (29) compared to the Iota 2’s 4.3kg to 5.4kg.

Saving a kilo doesn’t always sound like a lot, but as important for lightweight glider fans is that the packing volume is also reduced. It also means it is lighter to handle on the ground, and collapses are supposedly less aggressive, all other things being equal. The downside of course is that lighter materials wear out more quickly and demand greater care – you can not drag lightweight wings around take-off and expect to get away with it.

This being Advance, the glider is a thing of beauty with not a stitch out of place. The immediate feel is of quality, from the elastic covers of the softlinks to the pop of the surprisingly traditional popper on the brake. 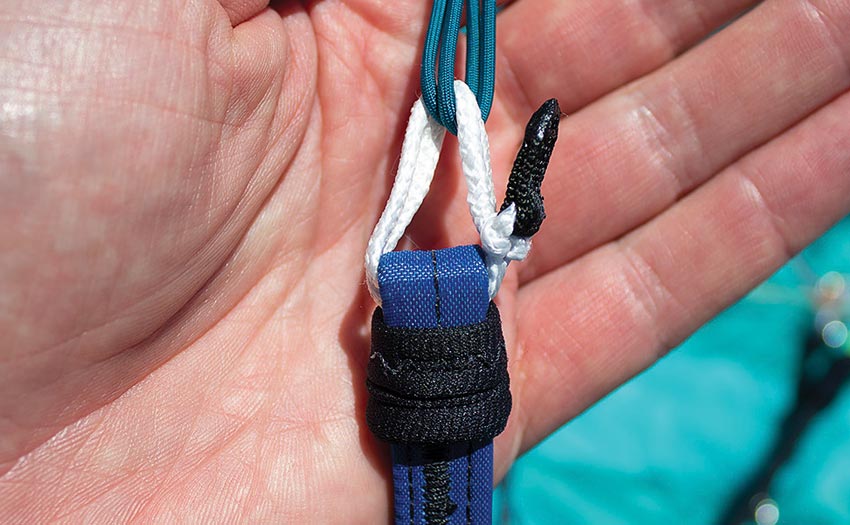 The Xi features softlinks instead of maillons. Photo: James Pagram

This feel continues into the first time you inflate it. No tugging, no jumping around on launch, just settled, predictable, light behaviour. The glider comes up, sits above your head, and almost invites you to launch. Like someone opening the door for you: “Oh, thank you.” You just walk through launch into the air.

I took the wing to South Africa over winter. We seemed to track a cold front for a week as we travelled along the southern coast, so I didn’t get to fly the famous Wilderness. I did however spend a few days at Hermanus, south of Cape Town. This morning thermic site faces the cold Atlantic ocean and typically features a crosswind, inversions and bullet thermals, so I got plenty of time to get a feel for the wing in the tricky stuff.

Again, I felt like everything was being handed to me on a plate. The information about the air was easy to interpret: Here is the edge of the thermal; here is stronger air; turn here; tighten up; track back a bit; now forwards. Flying actively the glider smoothed out much of the pitch – to the point that an instructor on the ground teaching a student said, “look at that guy, aim to fly like him”. I don’t think that was all down to my brilliant flying.

Coring thermals there was no need to pull back the outer wingtip, no unwanted diving into the turn, it was simply steady and good all the way round. Tighter turns were just that; they didn’t send you spiralling down.

Top-landing was straightforward. The wing has a lot of brake travel before the stall and if there is any surprise it is that the stall point is reached later rather than earlier; but for a wing like this that’s a good point that you’d get used to quickly. The last thing you want if you are trying to hover in to top-land at a new and untested spot in the mountains is to suddenly spin or stall the glider. And that is what this wing is all about, travelling and exploring. 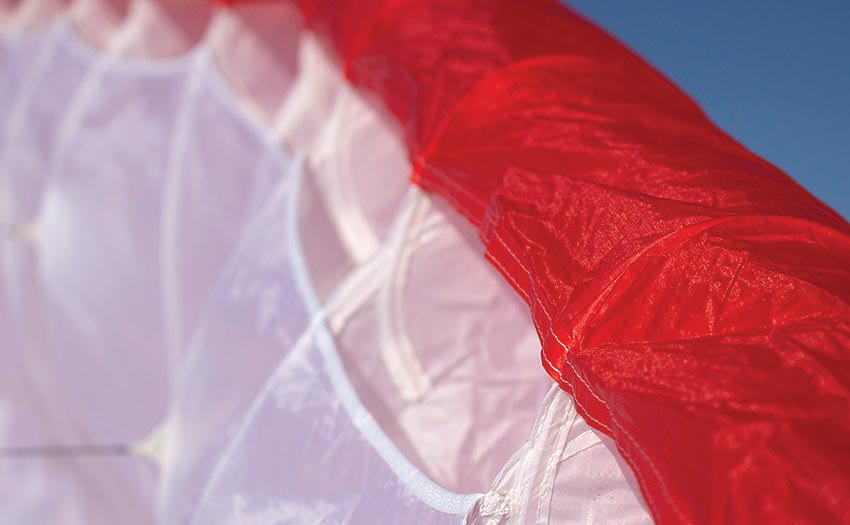 The leading edge wires; wires in the trailing edge have been kept shorter to allow easier packing. Photo: James Pagram

Back home I took it soaring in strong wind (+25km/h) and, fresh from reading Théo de Blic’s advice on groundhandling (see p42), I spent some time playing with the glider on the ground. I found the Xi easy to manage in the wind. Even no-handed the glider came up straight and was brought under control easily. The one time I did bounce off running after the glider I surprised myself by regaining control, bringing it overhead again and launching. Again, that’s the wing! There is power but it is very controllable power.

Exploring big ears I found they fluttered enigmatically but were stable and rolled out easily, without fuss. Speed bar was straightforward and usable, with 9-10km/h extra on full bar showing on my GPS. 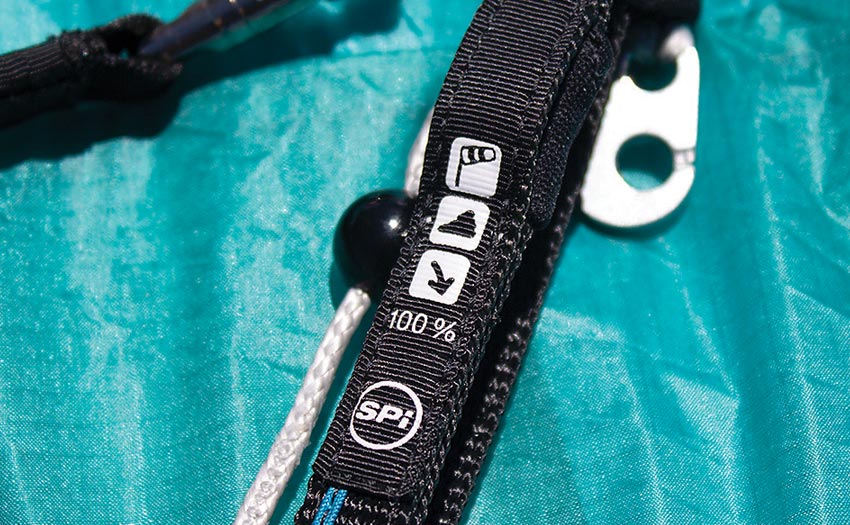 I would have no hesitation in taking this wing on a big trip or into the wilderness. It’s clearly been designed to help you at every point, not to show off or shout. Its good performance is a given. It instills confidence just by being settled, and not twitching or pulling hungrily. It feels safe while retaining strong performance and those are wonderful character traits for a glider built to help you explore places you might never otherwise go.

Next to the basic technical ability, such as being able to concentrate on centring a wind-influenced leeside thermal, flying at full-speed in turbulence, sorting out an extreme flight situation immediately, and understanding the actual wind situation, cross-country flying for me is above all a head game. Often, especially at the beginning of a flight, you might be haunted by negative thoughts when struggling in a tight spot. “The wind’s too strong”, or, “It’s probably going to overdevelop.” As soon as I recognise negative ‘spooks’, I try to directly oppose them with the positive facts. For example I might think “I’m lucky to be up here while many others have to be in the office”, or, “Look at the view!”

You have your pick of wings. Why did you choose the Xi?

I made the following simple calculations. On average in spring there are eight hours’ flying time each day. I thermal for half of this time, and glide for the other half. So I need a wing that climbs well, is very stable at speed and also has good glide performance. And to reach launches that need walk-ups it must be as light as possible. Plus, because vol-biv will often cover completely unknown territory, the controllability of my wing should not make special demands on me, in any shape or form. As far as I am concerned aspect ratio is a direct indication of a wing’s potentially demanding nature. 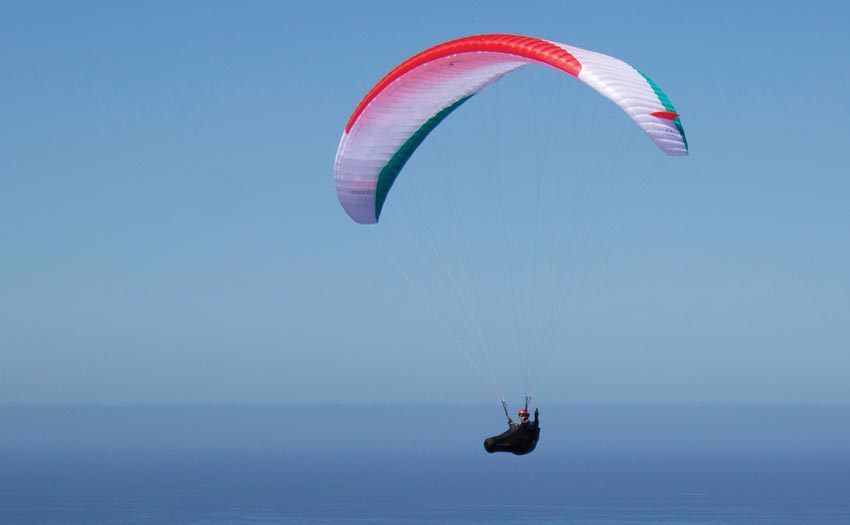 In my experience aspect ratio bears a direct relationship to demands on the pilot, the shape of its polar curve and the potential maximum speed. The higher the A/R the later (i.e. higher speed) the polar curve steepens to an unfavourable slope. The more compact the wing the easier it is to steer in bumpy air. The significance of maximum achievable speed is, in my view, negligible for cross-country flying. I choose my wing classification so that I can use its full potential over the whole route, lasting several days, in all the conditions likely to be encountered. This means I can always direct the glider where I want it to go, climb efficiently, and when gliding use the correct accelerated speed in turbulent air to achieve the required polar curve position. As we say, it’s “Push or Climb”.

What advice do you have for pilots new to the XC game?

A confident ability to call up a 14m/s spiral at will, with problem-free exit, comes high on the skill list. If you can do that you will be familiar with your wing’s behaviour at different angles of bank – a basic requirement for centring serious thermals (and not a million miles from the emergency descent). In addition, groundhandling helps enormously with the feel for the variety of forces generated by the canopy. If you can effortlessly manage your wing on the ground in wind, you will automatically fly actively in strong turbulence, and react to any problems instinctively.

Ed Ewing is the editor of Cross Country Magazine. His love affair with flight started with Parachute Action Man and continued into paragliding in the 1990s. He flew the Xi (29) in South Africa and the UK at 120kg all-up, with a Supair Delight 2 harness.