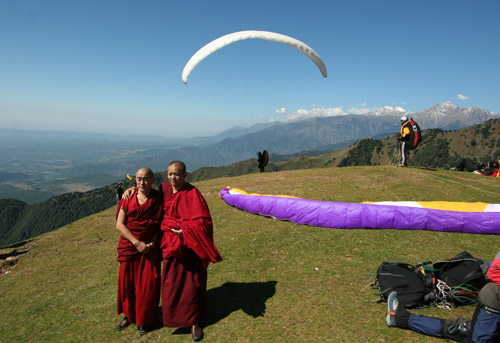 Launch at Billing, Himachel Pradesh. The area is home for many Tibetan monks-in-exile. Paragliding has been banned until 20 October 2010. Photo: Ed Ewing

Paragliding in India has been banned until 20 October 2010, dealing another blow to the sport in the country.

The blanket ban has been put in place by the government until the end of the Commonwealth Games, which are on in Delhi now.

The ban has left dozens of paraglider pilots in the Himalayan site of Bir / Billing grounded – and furious at the late notice of the ban.

Steve Purdie, a British instructor who has led groups to India for 10 years wrote an open letter to officials and local media protesting the decision.

“The day after our arrival at Bir, we were advised that paragliding had just been banned across India following security concerns.

“The Commonwealth Games has been some ten years in the planning. That the government should spring a paragliding ban at the last minute is unacceptable.”

He said his group was on the point of leaving India and would cancel further trips this year and in the future. Appealing to the economic argument that 200 international pilots bring to the area he said:

Bruce Mills, a New Zealand pilot and longtime flying resident of Bir, said it was, “Another brilliant piece of government decision making”.

He added: “Paragliding is banned all over India as it is considered a security risk for the Commonwealth Games. No flying in Kerala [South India] in case you’re carrying a bomb for Delhi!”

The ban is thought to have been put in place because of reports in January of potential attacks by terrorists flying paramotors and paragliders.

The reports seem to be a re-hash of a story that has been doing the rounds on the internet for several years, that of anti-India terror groups targeting major cities by overflying them on powered paragliders.

The most recent warnings came in January when India was put on “Red alert” over a “paragliding terrorist threat attack”.

Reports at the time said:

“Lakshar-e-Toiba is a Pakistan based Islamic terrorist group with very close links to Al Qaeda. Indian media is reporting that Indian Intelligence has discovered Lakshar-e-Toiba has purchased fifty paragliding equipments from Europe.”

The blanket ban against paragliding across the country comes as a second blow to paragliding in Bir. October is the best season for the site in Himachel Pradesh on the edge of the Himalayas. Following several accidents last year the site was closed and new rules put in place.

This most recent ban is further frustration for operators like Steve, and could see them leave the site permanently.

“There is no doubt that the paragliding community will see this ban as a last straw in their relationship with the Indian authorities.”

Paragliding pilot Neil Charles is due to fly out on 14 October and has been watching the situation closely.

“At the moment we’re planning to travel anyway,” he said. “The pilots out there put in an appeal on Monday [6 October] and are due to hear the decision today so fingers crossed for a sensible result.”

He added: “Steve has raised the possibility of our group canning Bir and going somewhere else if they don’t sort the situation out but we’re waiting for the moment.”

The Paragliding Association of India issued a press release highlighting their objection to the temporary ban.

“This is the same sport in which India’s top pilots ended the Asian Paragliding Championships with a podium finish, winning bronze for third place as a team.

“They made the nation proud by standing on the podium with the Indian flag raised high with respect.”

They added: “The loss of livelihood for the locals and the damage to the state’s image of a tourist destination following this ban is extensive.

“At the end of the day, it would be the state that would be at loss and also the nation’s image taking a hit.”

Regardless of the outcome, the situation has again cast Bir and India in a bad light. Pilots will undoubtedly think twice before travelling to the region in future years.

The Commonwealth Games in Delhi, some 360 km from Bir, are due to finish on 14 October. So far the games have attracted attention for all the wrong reasons – unfinished buildings, damaged stadiums and empty seats rather than medals tables have been the focus of media reports.

For your complete guide to flying in Bir, download the free Cross Country Travel Guide 2010/11