James Johnston was on an XC flight on Saturday 22 August when he went missing. His Garmin InReach stopped pinging shortly after 2pm on the Saturday afternoon, while Kiwi was still in the air. Since then a huge search has been underway to find the pilot, who is well known in New Zealand and USA flying circles.

Eureka County Sheriff’s Office said at the end of the search day on Saturday: “Extensive search efforts were exhausted.”

They said over 4,000 search hours had been devoted to finding Kiwi, including, “ground, drone/UAV, air planes, helicopters and satellite image review. All efforts were concluded with no findings.” 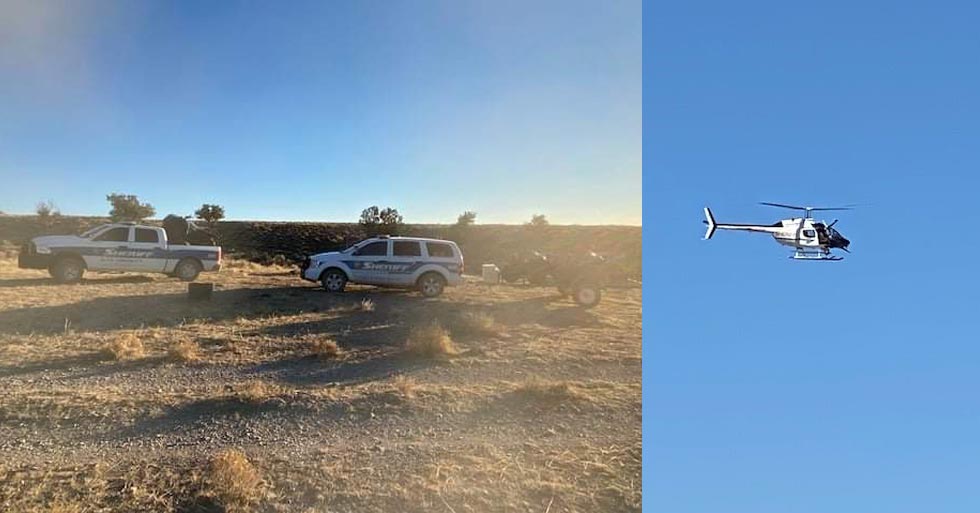 Images of the search operation, from the Eureka County Sheriff’s Office Facebook page

They added: “Any new developments will be followed up on accordingly. We would like to extend our sincere and deepest appreciation for our partnering agencies who helped us during this extensive search.”

Three local sheriff’s offices and the Nevada Department of Emergency Management were involved.

A civilian search operation is still underway. On Sunday 30 August organisers posted on the Gofundme page set up to raise money for the search for Kiwi: “We are in Day 8 of the Kiwi hunt. At this point the local counties and sheriffs have gone above and beyond to support us, but now are officially no longer active on the search. Any further search has to be managed and coordinated internally by our team on the ground.

“They are allowing us to continue our search as we have shown that we are responsible and are tracking all our movements – not adding to the risk of another SAR. They will absolutely be there to support our team the moment we find him. We are truly grateful beyond measure for how we’ve been supported thus far.

“To continue the search – the team here is small but mighty, around 15 people. We need ground support – experienced hikers who have Garmin InReach or other GPS trackers able to be utilized. We need folks with ground vehicles (atv/dirtbike), aerial support (licensed drones, planes, heli’s), [that can] help us to cover the most ground, experienced backcountry hikers and cross country runners.”

They added: “The area where James could have landed is expansive of 200 miles. We have been utilizing satellite imaging in addition to the knowledge and direction of professional paraglider pilots taking into account all likely flying conditions and trajectories. It’s simply a lot of ground to cover.”

Speaking by phone on Friday 28 August US pilot Gavin McClurg said he was convinced that Kiwi was not in the region where his satellite tracker last transmitted a signal.

“We covered the terrain foot by foot, on the ground and in the air, he’s just not there. You have to go on the simplest explanation, which is then ok, so maybe the InReach fell off his flight deck and he flew on. That’s possible. In that case, he could be anywhere within the next 70 miles, on several different trajectories.”

He said he and most of the other paraglider pilots who had been involved in the search were leaving, convinced they had done all they could.

“A few of us drank a toast to Kiwi last night, wherever he is.”

If James Kiwi Johnston is not found, he will join a short and sad list of pilots who have gone missing while paragliding, sparking large search operations. In 2002  British pilot Joel Kitchen disappeared in the Indian Himalaya, while Scotty Marion vanished in the Alps in August 2003. Despite extensive searches both have never been found.

Other pilots have been lost for several months, including Russian pilot Alexey Ashurov who went missing in Bir, India in autumn 2008. His body was found nine months later about 20km from where he’d launched from and was identified by his spectacles. Others have been found more quickly. In 2011 Frenchman Xavier Murillo was missing for 8 days in the 6,000m Cordillera Blanca in Peru before rescuers, which included Kiwi Johnston, found his body following an air search. Xavier had died following a crash in the high mountains.

Other pilots have been luckier. In August 2012 British PWC pilot Guy Anderson crashed while flying a task in Sun Valley, Idaho. Unable to raise help he was found by air search – he was alive and walking out with injuries after an extensive three-day search and rescue operation.

The region Kiwi was flying in has also seen its share of disappearances, most notably the multi-millionaire round-the-world balloonist and adventurer Steve Fossett. He disappeared on 3 September 2007 after taking off in a light plane in Nevada with fuel for a four-hour solo flight. After six hours the alarm was raised, but, despite a massive search, with near unlimited resources, including an estimated 50,000 people looking at satellite imagery, he wasn’t found. The search identified eight previously unidentified light plane crash sites, some decades old, but Fossett was not found until 13 months later. A hiker found Fosset’s identity cards, and the crash site was found a few days later. It was 100km south of where he had taken off.

The Gofundme page for Kiwi Johnston has to date raised over 90,000 US dollars to help pay for expenses involved in the air and ground search.