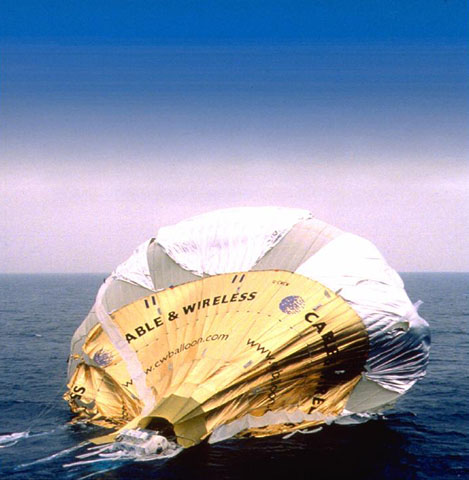 Between 1996 and 2002 there was a surge of interest in becoming the first team to fly non-stop around the world in a balloon. The convergence of improved weather forecasting techniques, GPS navigation, satellite communications and improved balloon performance led sponsors and teams to believe that the ultimate prize of long-distance balloon flight was within their grasp.

February 1999 saw the Cable and Wireless balloon ditch in the sea off Japan, 17 days and 17 hours into a round-the-world attempt. Pilots Andy Elson and Colin Prescot gave a press conference once back and dry land and Cross Country magazine ran this interview with the pair. The full story is in Colin’s autobiography, To the Edge of Space.

Sun Mar 7 11:49:45 1999 GMT
Shortly after being rescued off the south west coast of Japan, Andy and Colin spoke via telephone to Flight Director, Ian Ashpole in London live into the press conference. This is a transcript of their conversation:

“Welcome to the press conference for the Cable & Wireless Balloon. I am very pleased to announce that Colin and Andy made a safe landing at 0414 GMT, 50 miles south west of the Japanese coast. It was a controlled landing, and the pilots jumped out of the capsule into the water. The wind speed at that moment was only 4 miles an hour.

Ian Ashpole: Firstly congratulations for an absolutely incredible flight and a safe landing. Can you tell us about it?

Colin Prescot: Well Andy did a fantastic job of the landing. I jut got hoarse screaming out all of the instruments while he sat on top. He was throwing out little bits of paper so he could get a reference from the waves below because we really couldn’t see how far down it was.

IA: So you talked him down for the landing?

CP: Yes I talked him down for the landing while he was out on the top.

IA: Fantastic. How long were you actually in the water?

CP: We were in the water for I should think 60 seconds. The rescue operation was amazing. There was a big helicopter right there on the scene after we put out a pan call. We had a tremendous wind and snow was pouring in over the top of the capsule. We got it down very gently indeed which was a relief because it could have been nasty. But we’re here and we are very pleased to be here.

IA: We think you did an incredible job, well done. Could we have a word with Andy?

IA: Andy that was one amazing landing. How are you both? Are you both physically well?

Andy Elson: Oh yeah we are both physically fit and well. A little tired perhaps but otherwise absolutely fine.

IA: I’m not surprised, you shattered an amazing record. Was it really the weather in the end that got you to come down and ditch?

AE: Absolutely. At the end of the flight we ended up underneath an area of cloud. We were trying to get wind to get us north. Because we had just flown through the night we couldn’t spend a whole day under cloud. We had to go up through the cloud to recharge our batteries. On our way up we accumulated a great deal of snow and really the combination of that and the lack of sunshine for a day or so, meant there was no alternative but to land.

IA: Well you well and truly shattered the longest flight in the earth’s atmosphere. That’s going to take some beating. Would you be happy to answer some questions?

IA: How potentially dangerous was the ditching of the balloon?

AE: We chose a fairly safe area. We were able to fly the balloon about 100 feet above the water until the rescue services arrived. And it was fairly calm but there were thunderstorms moving into the area. In fact there are storms there now. So if we had waited another two hours it would have been very dangerous. Hence the reason for doing it very quickly and getting very organised and working so closely with the rescue operations who were great.

IA: It sounds like you chose exactly the right moment.

AE: Exactly the right moment would have been in about four days time in the Mediterranean!

IA: How much did your difficulties with the Chinese authorities really hamper the trip?

AE: First of all we haven’t got any difficulties with the Chinese authorities. They have been fine with us and explained everything. Due to problems with a rival attempt they asked us not to fly through their airspace and we respected that request. This trip has taken us the best part of 18 days and was aimed at getting around China.

If we had been able to fly through China, at this stage of our flight we would have been 5 or 6 days into our journey and at take off we also would have know what the weather was like in the Pacific. We worked our way across Europe and the Middle East and up around China which has taken us 18 days. We had no idea at take-off what the weather was going to be like when we got here and we had to take pot luck and we didn’t win.

AE: That is not quite correct, I think there was a misunderstanding somewhere along the line. We are just talking with the salvage company at the moment about going and getting it. But the weather is really bad now and they can’t put a plane up to spot it at the moment. So although it isn’t rescued yet it will be by tomorrow morning.

IA: We are very pleased to hear you are safe and well. You must be terribly disappointed. What was going through your minds when you took the decision to land?

AE: I’m a fairly practical person, so the disappointment will probably come later. As an engineer I do things on a logical basis and logic was reviewing the facts before me and making decisions and acting on them. I think the disappointment will come tomorrow. But I would like to say that although we haven’t succeeded in flying around the world, we haven’t failed, we have just found another way that doesn’t work!

IA: Nicely put Andy. It’s early days but what are your thoughts on another attempt?

AE: I guess it is probably inevitable but at this stage in time I don’t know. Obviously we need to talk to Cable & Wireless to see what they think about it. But we have been very happy with the flying. We get on exceedingly well as a team. The whole team back in London have supported us superbly.

The Meteorological information has been as good as it could possibly be and we were very happy with everything. We have learnt a lot of lessons from this flight and maybe one of them is that it isn’t possible to do this in the Northern Hemisphere without permission from China.

We need time to review it obviously but we have no major objections against it. We have had an extremely good flight, albeit a slow one, but we have proved that to get over the Pacific you need an enormous amount of luck. The weather wasn’t typical for that time of year and it wasn’t good.

IA: Finally, you have been in the air for almost 18 days. What are the highlights of the trip and what do you remember most?

AE: Lots and lots of things, but one of the most special was the Sahara. It is just so vast and every time you look out of the window it has changed, the colours are different or the sun is at a different angle on the dunes. A very recent memory is that of the Island of Taiwan silhouetted over the cloudy sky. We have lots of lovely memories, but also some we don’t wish to repeat.

As we were leaving Thailand we had to fly through a thunderstorm and out climb the building clouds which topped out at about 30,000 feet which was the same as our ceiling. That was an extremely tense time and we thought for several moments that the balloon was going to be destroyed. Something like that is a good team building kind of thing but something we don’t necessarily want to repeat!

IA: After 18 days I am sure there are loads of things you and Colin want to do. The question is.?

AE: After 17 days and 18 hours we are quite keen on getting a shower! We are currently sorting out paper work and immigration and thanking our rescue team who were fantastic. We also need to make sure the balloon is safe and not a navigational hazard. A shower is definitely what we most want to do!

AE: I would just like to say publicly the whole team has worked fantastically and my grateful thanks to all of them and also from Colin. Thank you very much to the press and everyone for being so interested.