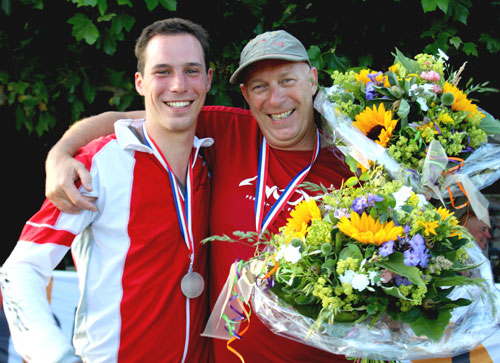 A father and son have come first and second in the Dutch Open Flatland Competition.

Hans ter Maat won the competition for the third time, while his 20-year-old son Chavert came a close second. In third place was Ruud Oudendijk.

The last weekend in June saw the final battle to become Dutch champion. Sixty pilots had fought it out over several previous weekends for 16 coveted spots in the final.

Unlike most paragliding comps or leagues, the Dutch Open Flatland Comp operates a unique system where pilots can fly from any official tow field on several designated weekends throughout the season before meeting for a decision-making ‘final’. The season’s four best flights count, and are entered and scored online. Fans say the format cuts down on travelling expenses and wasted time on bad-weather weekends.

It went down to the wire on the last weekend, 25-26 June, when qualifying pilots met at Vorden in the east of the country for the deciding final. With Chavert and Hans already well ahead in the rankings it was clear one of them would win, but who? In the end, “a bit of luck” saw Hans fly further than his son on the last possible day to take the title. Flights of between 32km and 70km were flown by the 16 pilots.

Chavert and Hans, who are both Nova team pilots, regularly swap the silverware in the Netherlands. Chavert first won in 2008 when he was only 17-years-old. He then had to hand the title over to his dad in 2009.

A full round up of results is on goxc.org.