The FAI has suspended FAI member countries Russia and Belarus “with immediate effect” because of the conflict taking place in Ukraine.

The move means pilots from Belarus and Russia will not be able to compete in any FAI-sanctioned event until the suspension is lifted.

The move will affect pilots across the 13 FAI air sports disciplines, including paragliding, hang gliding and paramotoring.

In the statement issued on 28 February and signed by the FAI Executive board, the FAI stated: “The military conflict taking place in Ukraine is of grave international concern.

“We are all deeply saddened by the inevitable human cost of war and the humanitarian crises that will be created because of this conflict.

“The FAI’s fundamental aim is to maintain the integrity and support the development of air sports across all nations in line with a set of values that nurture inclusion and transcend national differences.

“To maintain that aim under the circumstances created by the military conflict in the Ukraine, the FAI Executive Board has unanimously decided to implement the following extraordinary measures: To suspend the members of Russia and Belarus with immediate effect and therefore removing all rights as listed in FAI Statutes 2.4.2.1.”

Statement 2.4.2.1 reads: “Active Members shall be entitled to administer Sporting Powers delegated by FAI, to organise FAI international competitions, to assist in the homologation of aeronautic and space records in their respective Countries, to participate in FAI sporting events and the work of the specialised FAI Air Sport Commissions and Technical Commissions, to attend FAI meetings, to nominate a Vice-President to represent the Active Member, a Regional Vice-President, if required, and delegates to other FAI bodies as provided for in FAI By-Laws, to represent their respective Countries in FAI matters and to exercise such voting rights as prescribed by the Statutes, the FAI By-Laws and the Sporting Code.”

Although technical and wordy, the key phrase is, “Members shall be entitled … to participate in FAI sporting events.” That entitlement has now been withdrawn, meaning pilots can no longer compete. 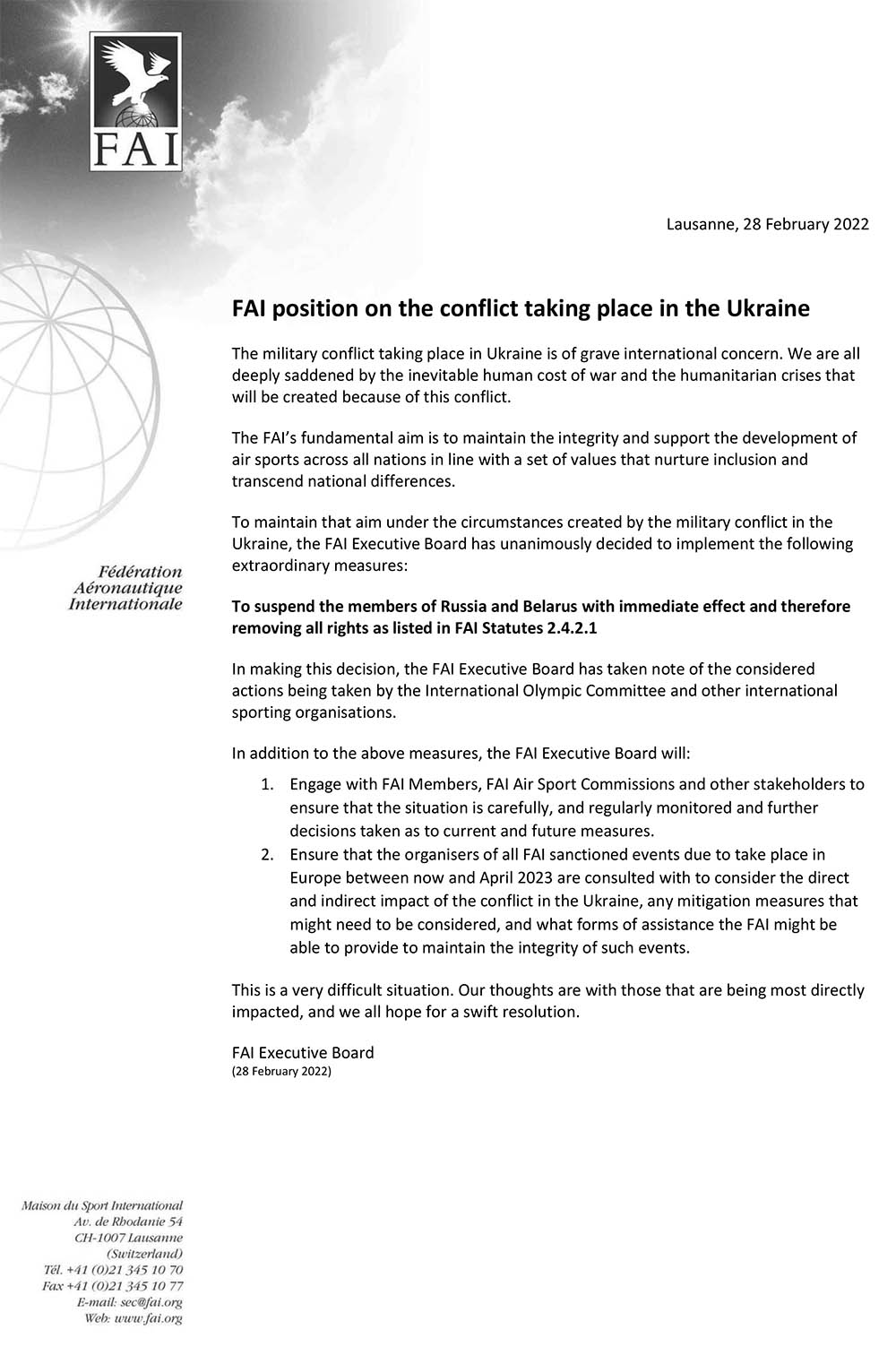 “1. Engage with FAI Members, FAI Air Sport Commissions and other stakeholders to ensure that the situation is carefully, and regularly monitored and further decisions taken as to current and future measures.

“2. Ensure that the organisers of all FAI sanctioned events due to take place in Europe between now and April 2023 are consulted with to consider the direct and indirect impact of the conflict in the Ukraine, any mitigation measures that might need to be considered, and what forms of assistance the FAI might be able to provide to maintain the integrity of such events.

“This is a very difficult situation. Our thoughts are with those that are being most directly impacted, and we all hope for a swift resolution.”

In paramotoring, pilots will not be able to take part in the FAI Paramotor World Championships in Brazil in April.

The announcement of the ban came soon after the International Olympic Committee had issued a statement “strongly urging” international sports federations and organisers of sports events to, “do everything in their power to ensure that no athlete or sports official from Russia or Belarus be allowed to take part under the name of Russia or Belarus”.

The FAI has been a recognised IOC International Federation since 1986. The FAI, World Air Sports Federation, has more than 100 country members and is responsible for sanctioning air sports competitions around the world. It also approves air sport world records.

Russia placed 16th in the recent Paragliding World Championships in Argentina in November last year, out of 34 nations. Belarus was not represented.

The FAI’s statement is here (pdf).