Antoine Montant in Base jump tragedy 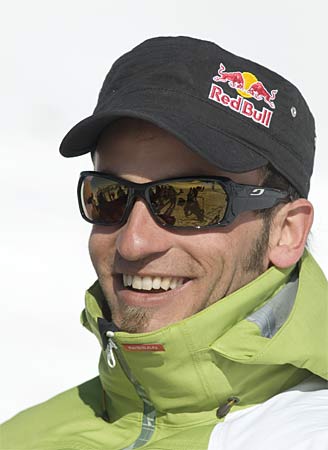 Antoine Montant, one of the world’s best speed-riders, has tragically died in a Base jumping accident in France.

According to reports in Le Dauphine, a French newspaper, the paragliding and speed-riding star was found on Sunday afternoon following a search that lasted most of the weekend.

Antoine went missing on Friday afternoon after going wingsuit Base jumping in the Collet d’Anterne area, near the village of Sixt-Fer-a-Cheval in the Samoens Valley, north of Chamonix.

According to the report Antoine’s parachute failed to open.

Antoine was one of the best speed-riding pilots in the sport and had won numerous titles. He was a key exponent of the sport of speed riding, and regularly attracted huge attention and acclaim for his videos and films.

Well known in the Portes du Soleil ski area as a ski and paragliding instructor he was known to the wider world as a Red Bull sponsored pilot who regularly pushed boundaries, including a spectacular cable-car slide in Chamonix earlier this year.

With his films he made the seemingly impossible look easy and opened up the sport to a much wider audience than would otherwise see it.

He first caught the world’s imagination in 2006 when he and Francois Bon completed an incredible descent of the North Face of the Eiger and posted the two-minute film on YouTube.

The accident is a second tragedy for the Montant family. In 2006 Antoine’s brother Valery died following a fall while hiking back up following a flight from the Salève in France.

A regular in the pages of Cross Country magazine, Antoine will be sorely missed by all those who knew him. We offer our sincere condolences to his family and friends, of which there were many.

JustAcro.com have also reported on the accident, describing the search for Antoine on Sunday:

Antoine’s girlfriend called attention on Facebook that he is missing since saturday afternoon after he went for a BASE jump in the area of Collet d’Anterne in Haute Savoie, France.

Just a few hours later many people such as friends, mountain guides, paragliders, base jumpers got together for the search of Antoine. In the afternoon the terrible news hit the scene, that they found him dead in the mountains.

He went for a wingsuit jump alone so nobody witnessed what happened. He was found with his parachute being still inside the container with only the pilot chute being outside. Friends believe it only fall out in the impact, not because he was about to open his parachute.

A portrait of Antoine Montant (audio in French)

Tributes have been paid to the 30-year-old pilot on his Facebook page.