A LONG TIME AGO, and much earlier in my paragliding career, I flew Mac Para’s original Eden, which came out in 1998. The wing was a big leap forward in design from my previous gliders, a Flight Design Dream followed by their A4, and I did my first flops over the back of the South-Wales hills on it. I loved it, and kept it for several years.

Since the early 2000s I hadn’t flown another Mac Para wing until the Super Paragliding Testival in Kössen this year, when I borrowed the Paradis (Lightweight Eden 6) for a jaunt up the cable car and a fly around the beautiful Austrian mountain arena where the festival takes place. It was a very enjoyable flight and a wing that I imagine would be right up my street. I chatted with Mac Para’s Petr Recek afterwards, and he told me about the latest wing they’d added to their range: the Illusion. 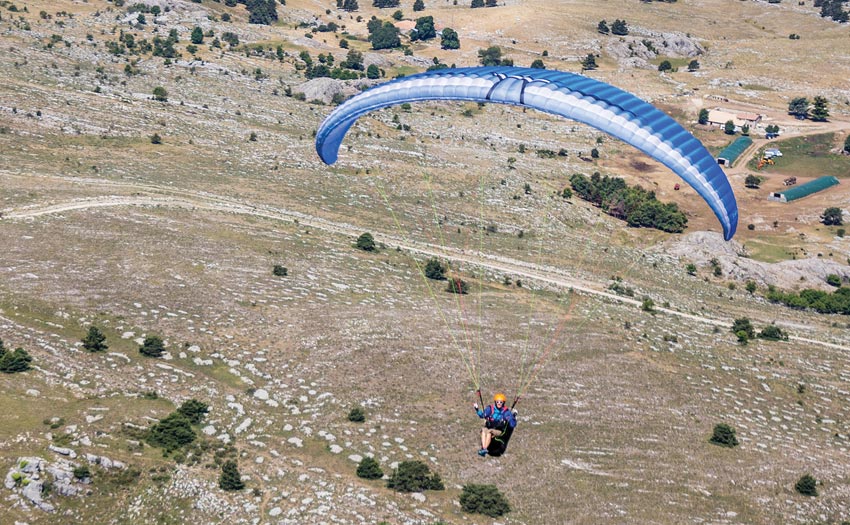 The Illusion is also certified EN B, but is designed to be a more accessible wing than the Paradis and Eden 6 (reviewed here). It slots into the range between the Eden and Mac Para’s post-school EN-A wing, the Muse 4. Petr said the Illusion still has very good performance, but is less demanding to fly than the Eden. It prioritises safety, and is a good choice for someone moving up from their first wing and setting out on their first cross-countries, or a pilot who doesn’t fly a huge number of hours in a year.

It’s very capable of flying cross-country, making it a good choice for a large swath of pilots. I’ve flown a few low-B wings recently and I have to say I really enjoy them. I find them relaxing to fly in boisterous air, of which we get a bit in the South of France, and they leave plenty of thinking space for enjoying the view, taking photos or planning where to head to next, although with a low-B you expect to lose out a little on speed and glide performance for the extra security. I was very keen to give the Illusion a go. 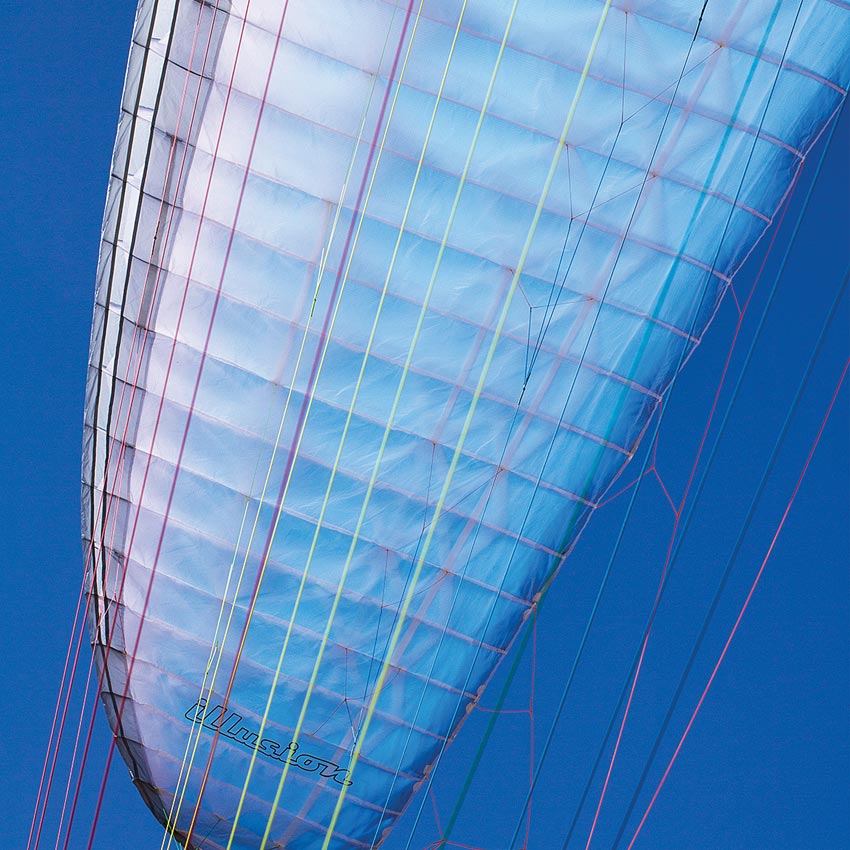 The bottom-surface is 27g/m2 Porcher Skytex, slightly heavier Skytex 32 is on top, with the robust 38g/m2 for the leading edge

Under no Illusion
The Illusion has 52 cells and a flat aspect-ratio of 5.34, which is similar to the Triple Seven Knight (5.4) that is reviewed here, and higher than say the BGD Epic (5.01, reviewed here), Ozone Buzz Z5 (5.16) or Nova Ion 4 (5.14). It is a semi-lightweight wing, and the canopy weight falls exactly halfway between that of the Eden 6 and the Paradis.

The wing’s bottom-surface is made from the very light 27g/m² Porcher Skytex, and it has the slightly heavier Skytex 32 on top, and the robust 38g/m2 cloth for the leading edge, both top and bottom. This combination of materials keeps weight down, but offers good durability, which Mac Para say was an important consideration. Likewise, they say their line geometry will last for years without the need for any trim-tuning. 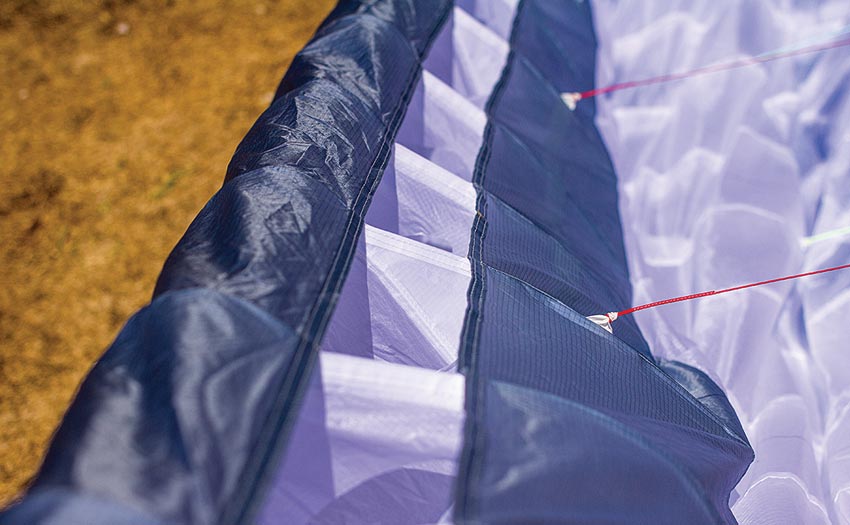 The leading edge supports are quite long, and Mac Para supply a substantial concertina-packing bag with a padded section to protect them. The risers are narrow webbing, and are colour-coded so you can easily find the split-As, the Bs and the Cs. Although it’s a semi-light wing, the risers are full-spec, with brake lines running through pulleys, and swivels to prevent the brake-lines from becoming twisted up. The speed system, too, has decent chunky pulleys. Brake handles are a nice size and thickness, comfortable without being enormous, and they connect to the risers with poppers. The lines are sheathed and colour-coded which makes the glider easy to set up on launch. 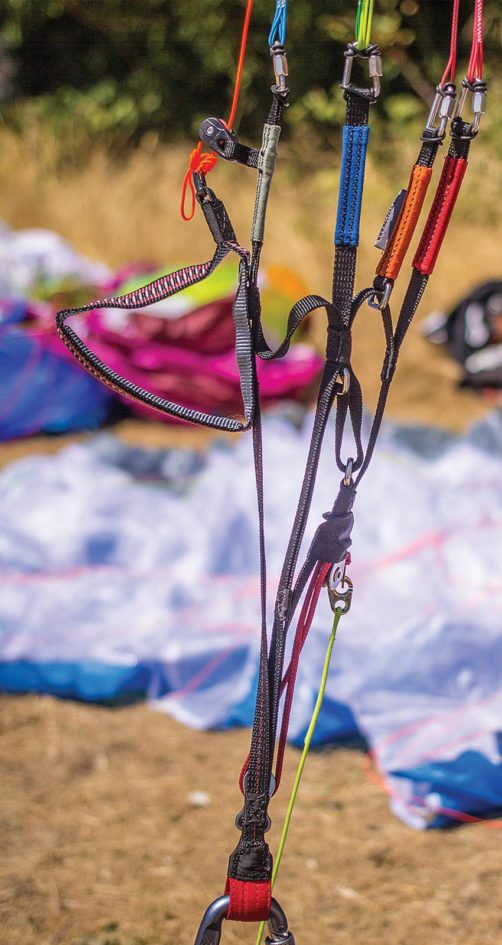 First flights
My first outing with the Illusion was a last-minute rush up to Gourdon in the middle of summer to take photos of another glider. I found the Illusion very easy to launch, on this and all subsequent occasions. It inflates smoothly and evenly, rises nicely overhead and it doesn’t have too much overshoot tendency. It’s a nice, calm wing to launch, and instilled a nice, calm feeling in me!

However, there’s no accounting for a pilot’s timing or lack thereof. I managed to take off into a bit of a sink cycle and five minutes in, found myself below the top and struggling. I thought I’d blown it and was destined for the field of shame at the bottom. Not for the first time!
But then I felt a little tug through the right brake as the wingtip found the edge of a bubble of lift out front. It was not all that strong, but it seemed to be consistent. I turned into it, one 360 and then another, and as I rose the lift became stronger and better formed, until I was level with the top again and out of immediate bomb-out danger.

I then went on to enjoy an hour and a half or so of very pleasant flying, and from that first flight I really enjoyed thermalling the Illusion. I found it very intuitive, with clear information coming through the brakes and the harness. I felt the need to be quite active on the outer brake in thermals, reining the wingtip in a little when necessary, and more so than I’ve found on some gliders where you can determine your turn circle with the inner brake and leave the outer wingtip to follow on its own without touching it. This is no bad thing, and actually it was nice to feel fully in control of the glider.

I found the Illusion’s handling to be very pleasant, too. Brake pressure is light and progressive, and the wing responds precisely and immediately to brake inputs. The handling is certainly not dull. The day turned out to be good – nice thermals, nothing too rowdy or turbulent, and in fact the ideal day for taking photos, with the Illusion a good platform from which to take them. As well as having low roll tendency, it’s also pretty pitch stable so you don’t need to be active on the brakes all the time to even out little dives. The wing turns nice and flat if you want it to, but you can get it to bank up with a combination of weight-shift and brakes. It’s not the most rolly of gliders, and even well loaded I think it needs some definite brake input as well to bank it up: all the better for taking photographs, where you tend to lean to one side and inadvertently turn on rolly wings!

I felt very happy to put the brakes in one hand and leave it to fly, while I concentrated on looking out for other gliders and taking photos. There were very few occasions where I felt the urge to take the brakes back in both hands and concentrate on flying, but almost certainly I didn’t actually need to even then. The test report for the Illusion shows lots of As, with Bs only for symmetric front collapse, recovery from full-stall and accelerated asymmetrics. 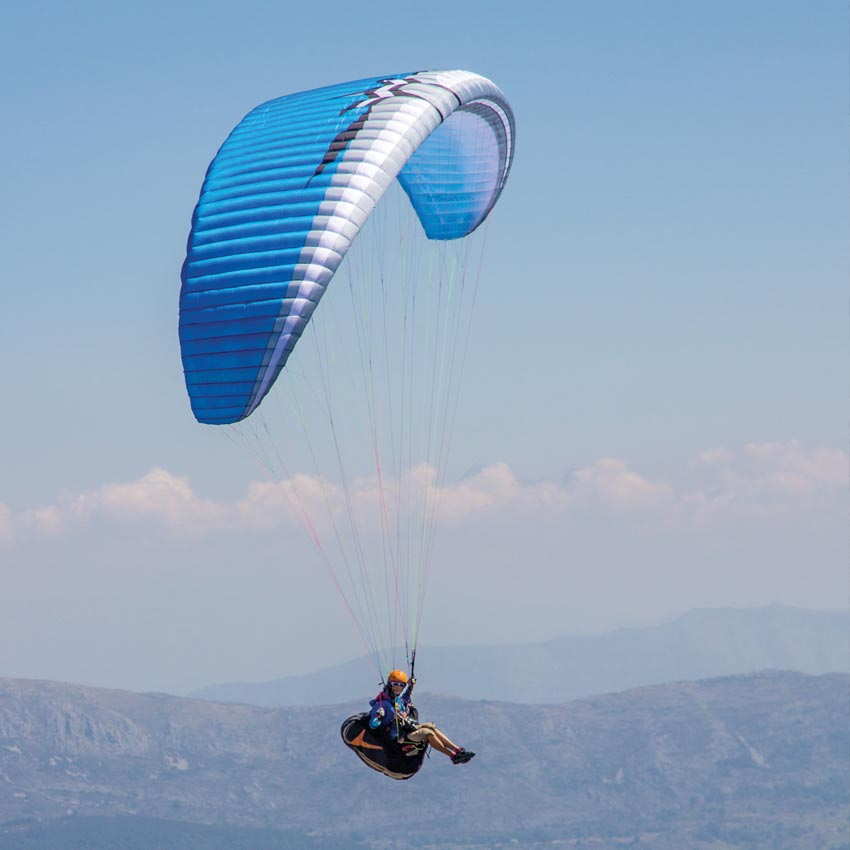 The Illusion is a perfect post-school first wing and is designed as such. Photo: Marcus King

Thermalling
On subsequent flights at Gourdon and at Gréolières I always found the Illusion thermalled well, and as if it had good speed and glide performance. Pushing the speedbar was very smooth and easy, and it was easy to attain pulley-to-pulley. I measured the speed using the calibrated Flymaster TAS probe, but my readings (36km/h trim and 46k/h pulley-to pulley) were slightly lower than quoted on Mac Para’s website (37km/h and 49km/h). I did the test several times with similar results. As a control, I took my Mentor 4 Light out and performed the same tests with the same probe, and got readings of 36km/h and 47km/h), so very similar. The Mentor 4 Light is an older but higher category of wing, and I’m nearer the middle of the weight range than the top on it. Lots of manufacturers do not quote speed readings, precisely because they are difficult to measure, and Petr said although my readings sound a bit low, they know TAS readings are affected by air pressure (altitude), temperature and humidity.

Just an Illusion
Overall I really enjoyed flying the Illusion. I think it’s a very nice low-B wing, it’s very reassuring to fly but with nice handling and the right amount of feedback, and it thermals really well. Are there any negatives? Well the brake pulleys squeak slightly, and the weight ranges, particularly between the 22 and 24 sizes, don’t overlap by very much, although MacPara say they reduced the 22’s top weight from 75kg to 72kg for the certification. The only other thing is that the name gives me an ear-worm every single time I think of it. Younger readers should check out ‘Imagination’ on YouTube sometime, and you’ll come across the golden-tunic wearing 80s band and their 1982 hit, ‘Illusion’. One listen and you’ll get the ear-worm too!