As possibly the most sedate XC pilot ever, whose day-job is at an accounting firm, if there is one thing I am not, it is “punk”.

Having been asked to review the Punk, the new EN B from BGD, I arranged to meet BGD designer Bruce Goldsmith at a bar in nearby Italy. There, as the colourful bag attracted some positive comments, Bruce explained the wing is an upper-end B, designed to replace the successful Base.

However, there are some significant changes. There are 54 cells rather than the Base’s 46, and a more efficient sharknose profile. And rather than increasing aspect ratio to gain performance, Bruce actually reduced it from 5.68 to 5.42 and looked at improving pressurisation, turn behaviour and overall efficiency.

My experience with Bruce’s wings has always been positive. He has a loyal following and I know a few pilots who would order his wings without trying them. Personally I found one of the earlier BGD wings, the Tala, very civilised; but it lacked some life unless you were at the upper end of the weight range. Would this wing be a loudmouth Punk, or a colourful-but-calm character? 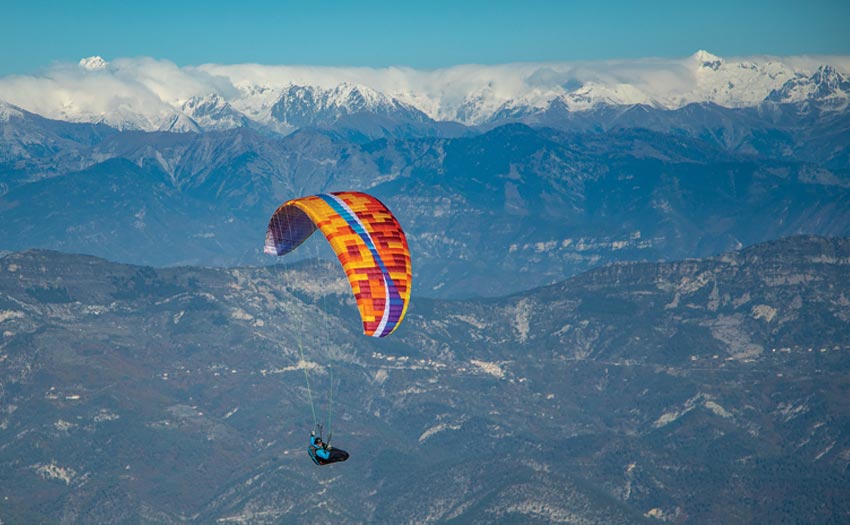 The glider feels efficient and overall is agile and obedient. The Punk has more than enough energy retention and agility, but is more damped and easier to manage than higher aspect-ratio peers. Photos: Marcus King

We had some fairly horrific weather in France late last year, so weekend warriors like me have had to deal with less than perfect conditions. My first flights were with strong wind and broken thermals; later I managed to grab some fantastic local XC flights with much more time to think and get a feel for performance and handling.

BGD use Chord Cut Billow (CCB) on their wings. This is effectively the use of small, optimised shapes on the top of the leading edge to reduce wrinkling on the most important parts of the leading edge. Smoother leading edge equals more performance. The Punk has CCB and also an effective sharknose. The A-lines are set back a little, but not as excessively as you see on more aggressive EN-C sharknoses. The objective of this combination is to give the most efficient and pitch-stable leading edge. 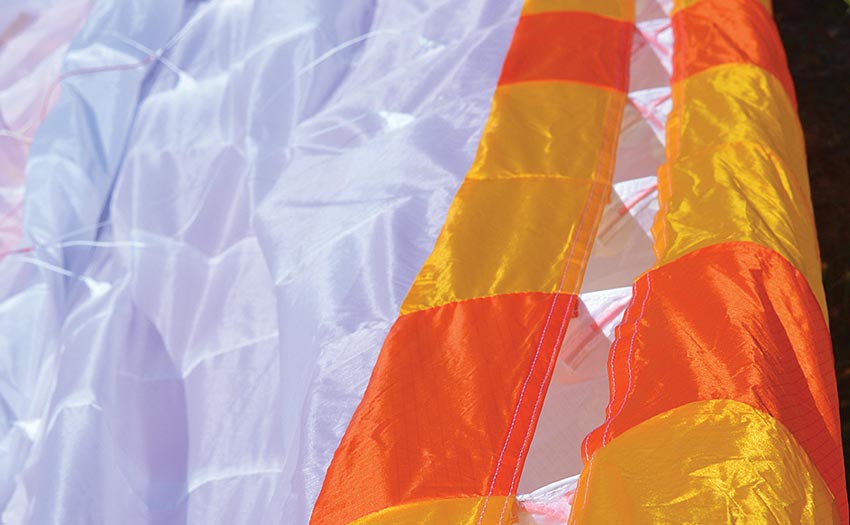 Looking towards the trailing edge, the C-line attachments are spread along a reinforcement or post-C band inside the wing structure. Some manufacturers use mini-ribs and rods to improve efficiency, but Bruce found that apart from being less effort to pack, this design improves yaw and roll characteristics.

Earlier BGD wings had fairly basic riser-sets, but the team have raised their game. There is colour-coding for left and right; the magnetic snap-lock brake holders are better than traditional magnetic holders; and overall there is a quality feel.

The risers are quite rigid and narrow, and easy to handle for an intermediate pilot. There is a rear-riser steering loop, which is increasingly common on upper EN-B wings. There are split-A risers for big ears and large, somewhat floppy brake handles. The Harken pulleys are plastic, which looks cheaper but are actually nice to fly with as there are fewer squeaks. The line-set is nicely colour-coded with only the upper lines being unsheathed. 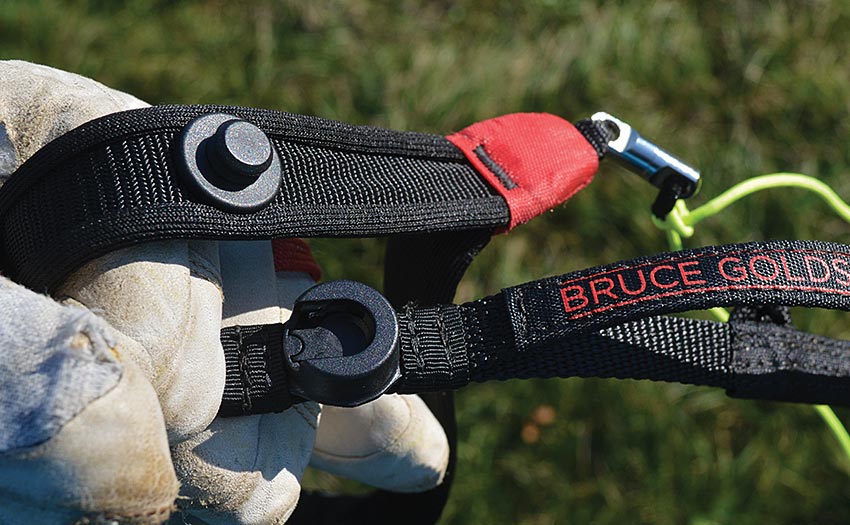 The overall set-up is easy to use, in fact rolling out the wing for the first time the only user-error I made was trying to unclip the brakes as if they were normal press-studs, but once used to sliding the brakes out of their snap-locks I really liked them. Compared with normal magnets they are way more usable and reliable.

For my first flight I was alone and the wind was stronger than I would have liked. Over-aggressive pressure on the risers in wind is never a good idea so I started gently. The wing inflated easily and once it was damped out and sitting overhead it was easy to keep in one place. I killed it a few times and tried launching from off-set positions. I’ve found some sharknose wings a little more difficult when off-set, but the Punk was easy to pick up from any position. Even with just a wingtip and first few cells open the wing could be opened and popped overhead without too much effort.

Once off I was into some strong wind and broken air. I pushed out from the hill to get space. Straight away I had the feeling of efficiency and feedback. The wing did not hangback too much and sliced its way into thermals nicely. The first few turns felt efficient as I expected, but I was surprised at how obedient and agile the turns could be.

Sometimes when agility is added to a wing design it can be a little bit more of a handful when trying to fly in a straight line. Roll instability is fun at times, but not on a rock-and-roll day. The Punk has more than enough energy retention and agility but is more damped and easier to manage than a higher-aspect peer such as the Iota 2. 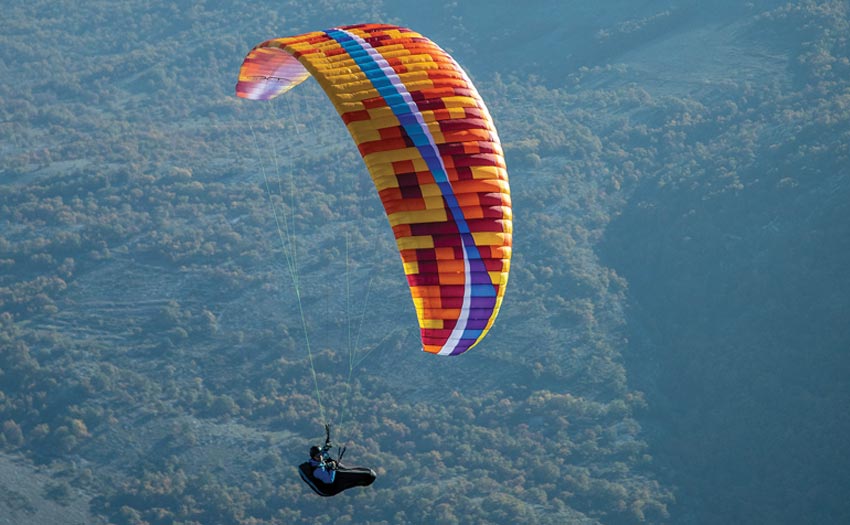 Pushing on bar the wing tightened and stabilised like an EN-C. Taut, efficient and fast. Pressure on the bar was medium and once on half- or full-bar it was easy to maintain.

At first I used gentle pressure on the C-risers rather than the C-handles to change direction and to damp out surges, but once adapted to them, the handles were useful. I’d advise caution when learning this technique, but on the Punk a pilot will get used to the concept of active flying on bar on an obedient and responsive wing. Top-landing, I found the wing easy to place.

From my first flights the main conclusion was that in Kung Fu conditions the wing had behaved and cut through the worst of the bumps. Luckily, better was to come with some fantastic flights at our local site.

Low down on a rocky ridge I always want some feedback and the Punk communicated well. The name suggests obnoxious and shouty, but really the wing is civilised when you need it to be. It settles well at a chosen angle of bank but, once you decide you want to change to flatter or narrower, the wing has excellent roll control. The outer wingtip is easy to manage, with very little tendency to dive ahead. This all meant that I could climb in small areas of lift and then stay flat when lift was weaker. The wing was not bullied out of rougher air either, it stuck steadfastly to the angle I told it to. 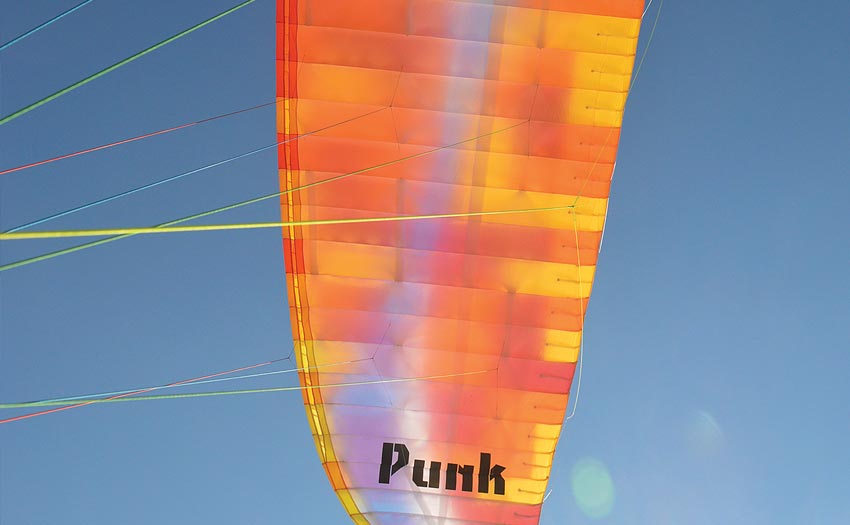 Colour-coded line-set on this three-liner

God Save the Accountant

I had two real-world collapses and they came out fairly quickly. One was just after launch and was a surge as I tried to get into my pod. Direction was not affected too badly and the collapse rolled out without fuss.

Simulated collapses are a little difficult to read into on shark-nose wings but I found 50% or more collapses were fine. They rolled out rather than banged out. I also have a bit of a reflex to pump out the collapse and that definitely sped up the process.

The main point was that direction was maintained quite easily during collapses and that in normal flight I got more than enough warning to prevent them in the first place. Big ears were similarly soft on exit but were effective and straightforward to use.

Getting high I had plenty of space to play around with the wing’s handling. Wingovers were fun and easily brought under control to exit. I think spiral entry will take a lower-end pilot by surprise a bit as this wing is quite dynamic when told to be. So go easy at first. I did some X-spirals, which involves speeding up and slowing the spiral a few times and found that easy to manage.

Whether exiting wingovers or spirals, the wing behaved impeccably during the conversion of energy. There was no nasty side-slip or hesitance. 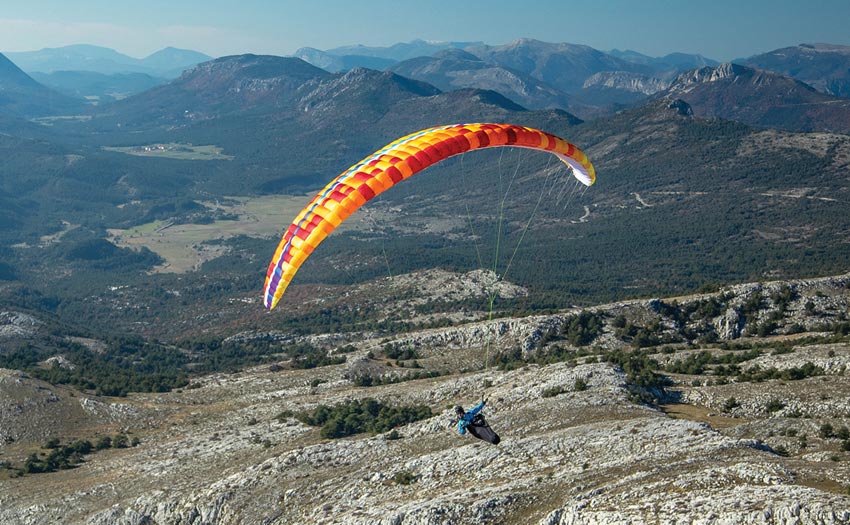 Safety and performance
“The glider is firmly in the EN-B class when it comes to passive safety and workload. But it also has superb, direct handling that will keep an ambitious pilot happy for a few seasons at least”.

Ever Fallen in Love

BGD have produced some of the most colourful designs of the past few years, influenced by BGD test pilot Anthony Green. Boring Brian was of course not so sure at first! Now it seems the paragliding market loves BGD colours, and so do I.

Indeed, with the Punk, there is no boring choice available. When I posted an in-flight photo on Instagram even my non-paragliding friends (I have some) commented on how “beautiful” and “fun” the wing was. It was good to see the wing made people smile!

Pilots trading up to the Punk from a lower level and older EN-B wing are probably looking for increased performance and efficiency. They will certainly get that, while knowing that they are flying a wing that is firmly in the EN-B class when it comes to passive safety and pilot workload. It doesn’t feel like an EN-C design that has been shoehorned into EN B.

However, the very name Punk tells you that this wing has more character than some. It has superb, direct, handling that will keep an ambitious pilot happy for a few seasons at least.

Meanwhile, pilots looking to trade down from EN-C will find more than enough joy in this wing. As Bruce says, even the most civilised pilots need to have the Punk brought out in us. And he’s right: after a few civilised hours of safe EN-B XC, even sensible Brian found himself spiralling in for fun.

Brian Steele has been flying for 20 years. Brought up on hike-and-fly in the hills of Scotland he migrated to the southern French Alps a decade ago, where he regularly enjoys flying alpine XC on EN B+ / C wings. His other passion is road-biking.