An extract from Thermal Flying by Burkhard Martens, the bible for paragliding and hang gliding pilots

Part 3: Cloud streets over flatlands. A series of choice cuts from Burkhard Martens’ new technique book on everything you need to know about cross country flying

If the conditions are right, cloud streets may even form over flatlands. Just as in the mountains these are the days when the lucky pilot can really go far in a short time.

The necessary conditions for cloud street formation in flatlands are as follows:

While the wind direction must remain pretty constant at all levels the wind speed should increase with altitude.

The wind strength should be highest in the upper 1/3 of the space between the ground and the top of the cloud.

There should be an inversion present at an altitude corresponding to the cloud base; the clouds must have vertical room for a healthy development but they cannot be allowed to grow too big. An inversion around 1,000 m above the condensation level is probably around right.

Tip:
Two things to consider when utilising cloud streets to fly in flatlands:
If the gap between two clouds in a street is greater than the distance to the next parallel street it is probably wiser to change streets.

If your bearing is at an angle to the cloud streets it pays to go as far as possible along the streets and change street when a gap in your current street appears. 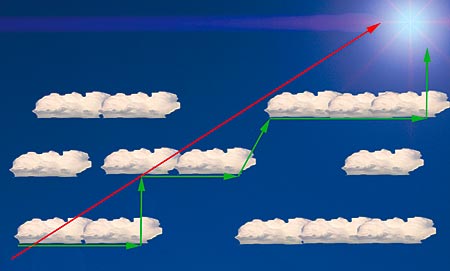 Illustration 1
The planned direction (red) and the most efficient line (green). The gaps in the cloud streets are used to change streets and move in the desired direction. Big gaps in cloud streets are also better negotiated by changing street than by attempting to cross large blue holes.

Tip:
The distance to the pilot you’re looking at is much shorter than you think! As a rule of thumb he is half as far away as you think and then still a bit closer! 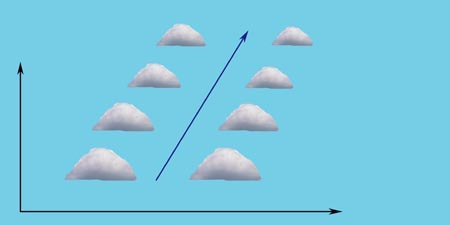 Illustration 2
A simplified illustration of the air movement around cloud streets. This illustration also serves to illuminate why the jump from one cloud street to the next should always be done perpendicular to the wind direction (as shown in Illustration 1) to avoid spending more time than needed in the sink between the streets.

Picture 1
These two pictures were taken within two seconds of each other. Notice how far the cloud has drifted in the second shot by looking at the treetops at the bottom. The wind is far too strong for flying, and if it is still quiet at ground level it is only because the wind has not come down there yet.

Dolphin flying under cloud streets
Dolphin flying, or dolphining, is the fastest and most efficient way to put some kilometres behind us when flying xc. When dolphining the pilot simply flies straight, braking in lift and accelerating in sink. The trick is to adjust the speed exactly so that the net altitude remains the same over time, and this is something that takes a lot of practice.

Near cloud base we speed up and increase our sink rate so that we avoid getting sucked in. Lower down we may choose to fly closer to min. sink in order to get the most out of the lift at hand. By constantly changing the amount of speed bar we push or even the amount of brake input we attempt to remain roughly within the area of the best climbing, normally quite close to the cloud base. Once we have this dialled in we can experience some very satisfying flying. 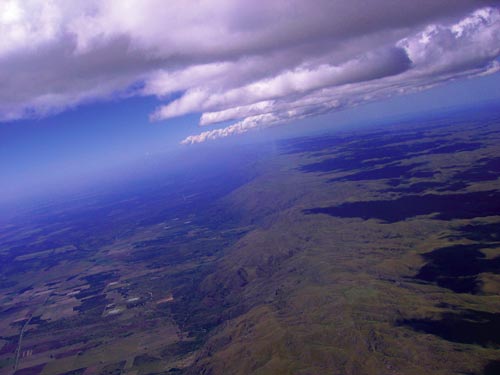